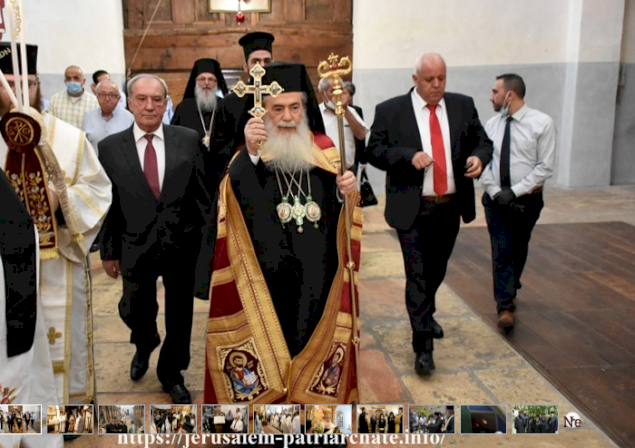 H.H.B. Theophilos celebrates Holy Mass at the Nativity Church in Bethlehem Available in the following languages:

On Sunday, June /21, 2020, His Beatitude our Father and Patriarch of Jerusalem Theophilos officiated the Divine Liturgy at the Basilica of the Nativity in Bethlehem on the Feast of All the Saints of Palestine, Martyrs, Confessors and Righteous, which is being celebrated in the last decades by the Patriarchate of Jerusalem after the Sunday of All Saints.

Co-celebrants to His Betitude were the Patriarchal Representative in Bethlehem His Eminence Archbishop Theophylactos of Jordan, their Eminences Archbishops Aristarchos of Constantina and Aristovoulos of Madaba, Hagiotaphite Hieromonks and Arab-speaking Priests, who minister the Shrine of Bethlehem and Archdeacon Mark with Hierodeacon Eulogios. The chanting was delivered by Mr. Vasilios Gotsopoulos on the right in Greek and by the Basilica choir under Mr. Lawrence Samour on the left in Arabic, with the participation of only a few faithful due to the measures against COVID-19.

Before the Holy Communion, His Beatitude read the following Sermon:

“And Jesus, walking by the sea of Galilee, saw two brethren, Simon called Peter, and Andrew his brother, casting a net into the sea: for they were fishers. And he saith unto them, Follow me, and I will make you fishers of men. And they straightway left their nets, and followed him “(Matthew 4:18-20).

Our Holy Church of Jerusalem is especially celebrating today the Feast of the Saints of Palestine. Therefore, we also, by the grace of the Holy Spirit have gathered in this sacred place of the God-receiving Cave of the Nativity of our God and Saviour Jesus Christ in order to offer the bloodless Eucharist a sacrifice of praise to the Holy Trinitarian God, amidst the COVID-19 pandemic.

The geographical area of Palestine is the Biblical place where the heavenly met with the earthly, namely the revelation of God to men, which was fulfilled in the great mystery of God’s providence, of the incarnation of God the Word through the pure flesh of the Ever-Virgin Mary.

The Biblical Palestine in the primary place of the calling of Patriarch Abraham and of the Holy Apostles. “Now the Lord had said unto Abram, Get thee out of thy country, and from thy kindred, and from thy father’s house, unto a land that I will shew thee”(Genesis 12:1). And the Lord said to the fishermen: “And he saith unto them, Follow me, and I will make you fishers of men. And they straightway left their nets, and followed him”(Matthew 4:19-20).

Through Abraham’s calling by the Lord, the group of the Holy people and the Prophets of the Old Testament is being formed. And through the calling of the fishermen by Christ, the group of the Holy Apostles is being established. Both the Prophets and the Apostles became the foundation stone, with Christ being the chief corner stone, upon which all the Saints of the Church were established, as St. Paul says: “Now therefore ye are no more strangers and foreigners, but fellow citizens with the saints, and of the household of God; And are built upon the foundation of the apostles and prophets, Jesus Christ himself being the chief corner stone”(Ephesians 2:19-20).

This means that through the without hesitation acceptance of their calling, the Prophets and the Apostles were made by God vessels of the Holy Spirit, a Spirit of Holiness, according to St. Peter’s words: “But as he which hath called you is holy, so be ye holy in all manner of conversation; Because it is written, Be ye holy; for I am holy”(1 Peter 1:15-16).

In other words, the Holy Apostles who were called by our Lord Jesus Christ are the prototypes of holiness, namely of man’s deification, and for this reason we are called to imitate them. “Light is sown for the righteous, and gladness for the upright in heart. Rejoice in the Lord, ye righteous; and give thanks at the remembrance of his holiness”(Psalm 97:11-12) David chants.

The special characteristic of the land of Palestine is that it was watered and therefore sanctified by the sacred blood of the fulfilment of the Law of Moses and of the Prophets, namely of Christ’s blood. It was also watered with the blood of its Saints, as they became eye-and-ear witnesses of the teaching, the miracles, the Passion on the Cross and the Resurrection from the dead of our Lord and Saviour Jesus Christ, as St. John the Evangelist says: “And the Word was made flesh, and dwelt among us, (and we beheld his glory, the glory as of the only begotten of the Father,) full of grace and truth”(John 1:14). And according to Peter the chief of the Apostles: “For we have not followed cunningly devised fables, when we made known unto you the power and coming of our Lord Jesus Christ, but were eyewitnesses of his majesty”(2 Peter 1:16).

It is also noteworthy that the source of righteousness and holiness of all the Saints and of course of those in Palestine, is “the source of life” the Most Blessed Theotokos and Mother of our God, the Ever-Virgin Mary, who inaugurated the sanctification of the Biblical Palestine through Her Annunciation in Nazareth, by giving birth to God the Word in the Cave of Bethlehem, and through Her burial in Gethsemane in Jerusalem. All Saints owe their holiness and righteousness to the immaculate Lady Theotokos and Her obedience to the Will of God. “And not as it was by one that sinned, so is the gift: for the judgment was by one to condemnation, but the free gift is of many offences unto justification”(Romans 5:16) St. Paul preaches.

The Saints, being “full of fruits of righteousness through Jesus Christ for the praise and glory of God” (Phil. 1:11), according to Paul, are a living example by which we are urged to imitate their godly zeal and perfect love for Christ. And we say this, because the innumerable chorea of the Saints of the Church of Christ proves beyond doubt that every single man has the calling and is able to join the Saints as it is written: “become holy for I am holy”(1 Peter 1:16). This is precisely the command of our Lord and Saviour Jesus Christ, as it is also the purpose of His Church. “For the Saints are full of spiritual grace not only in their words but also in their bodies” St. Chrysostom says. “I venerate and respect the Saints, and I ask for their intersessions and prayers, for it is through their prayers that we are all saved” St. John Damascene says.

Today’s honoured Saints of Palestine, my dear brethren, are distinguished for their irrefutable historic witness that, on the one hand, the revealed truth in Christ is not an ideologic nor a worldly theory of a religion, and on the other, the Church as the body of Christ is not a social institution, nor a charity, but the fact that God, the Creator of all beings rests in His Saints and in the Church, and this is confirmed by the psalmist by saying: “For the Lord hath chosen Zion; he hath desired it for his habitation. This is my rest for ever: here will I dwell; for I have desired it”(Psalms 132:13-14).

Let us entreat the Saints who have boldness toward God, so that along with the intersessions of the Theotokos and Ever-Virgin Mary we may find the holiness in Christ and the salvation of our souls. Amen.”