International Day of Prayer for Eastern Christians: the urgency to support our fathers in faith 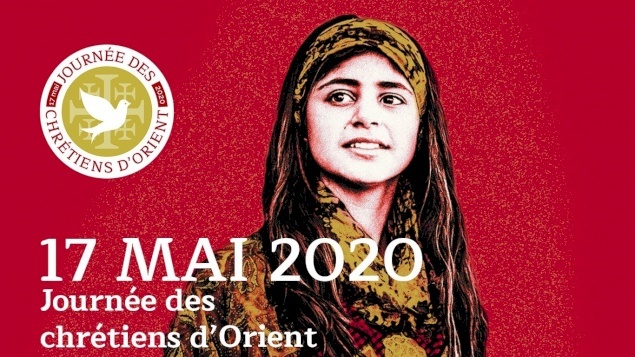 International Day of Prayer for Eastern Christians: the urgency to support our fathers in faith Available in the following languages:

FRANCE / EAST - The International Day of Prayer for Eastern Christians took place on Sunday, May 17. Organized every spring at the initiative of the Œuvre d’Orient, the event includes conferences, times of prayer, meetings and a Mass celebrated in one of the various Oriental Rites. Amid the pandemic crisis and due to the restrictions in force inside and outside France, the 2020 edition had to readjust its programming. Although there may be no meetings this year, the faithful were equally invited to live this day through prayer, connecting with their parishes. Online videos and lectures were also made allowing Latin Rite Catholics to get to know their Eastern brothers and sisters better.

It is an “international day in communion of prayer” you could read on the website of the Œuvre d’Orient. The association, alongside Eastern Christians in 23 countries, every year organizes, for the Sixth Sunday of Easter Time, this International Day of Prayer for Eastern Christians, which this year was held on Sunday, May 17 and which allowed French Catholics, through multiple initiatives, to rediscover the origins of Christianity and to meet Christians from different Eastern Catholic Churches.

Because of the health emergency due to the COVID-19 epidemic, the 2020 programming required a good dose of creativity. Even if the containment and restriction measures placed on the rallies did not allow the faithful to live moments of fraternity in parishes and to reunite with the Eastern brothers and sisters, the Œuvre d’Orient proposed initiatives that allowed this day in prayer to live.

Members of the faithful had the opportunity to join in the prayer intention of the day, to pass it on to one’s parish priest, but also to compose one dedicated to this day of communion, or even to organize a fundraiser - via the internet - with their parish, to support Christians of the East. At the same time, the Association made a bibliography and online conferences as well as a beautiful digital exhibition available to the faithful, allowing them to get to know the Christians of the Eastern rite better. On May 17, on the Day, a Eucharistic Celebration was also presided over by the general director of the Œuvre d’Orient, Msgr. Pascal Gollnisch, and broadcast on France 2 at 11.00.

To ensure the success of this occasion, the association appealed to its volunteers on site this year. Despite the health crisis, many made the choice to stay to continue serving the communities where they have been present for some months now. From Jerusalem, Cairo, Beirut or Addis Ababa, dozens sent audio recordings of the Our Father in the various oriental languages ​​(Arabic, Hebrew, Armenian, Ethiopian ...), while others appeared in the videos, where, posing next to their Eastern Catholic friends, invited Western Christians to pray.

“Why support Eastern Christians?” some French Catholic ask. What constitutes their “cause”? The cause of the Christians of the East is more relevant than ever and the reasons for supporting it are not lacking at all, as the Œuvre d’Orient recalls on this special day. Victims of discrimination and violence on their own lands, the choice to emigrate unfortunately impacts more and more these populations, whose presence in the East is two thousand years old. They are the custodians of a material (places of worship) and spiritual (charity, hope, and faith) heritage, which contributes to the richness of the various Eastern civilizations. If the prospect of a Middle East devoid of its Christians seems unimaginable, this must not make us forget that their number continues to decrease year after year. Therefore, the future in their land depends in part on our support.

Eastern Christians are very active in all spheres of the societies in which they live. A dynamism that can be seen, among other things, in the field of health, through many dispensaries, hospitals, and centers for the disabled which welcome all without distinction. These institutes, like their schools, are mostly run by congregations of religious women, which pay attention to the female role. This intent to promote greater integration of women into society, to welcome differences and take care of the most disadvantaged, makes Christian ambassadors of civilization and respect for human rights.

The Christian education system in these regions on the other hand boasts a reputation for excellence. Administered by religious congregations and by the Patriarchate, these institutions are largely frequented by Muslim students and contribute to a good understanding between communities. The wealth of this type of education, the knowledge of Islam and, in the Holy Land, of Judaism, without eliminating the difficulties, nevertheless allows Eastern Christians to face them in a different perspective, and at the same time makes them actors of reconciliation, of peace and interreligious dialogue.

In the Holy Land, the schools of the Latin Patriarchate of Jerusalem face great difficulties, since thousands of parents, affected by the economic consequences of the health crisis, are now unable to pay their children’s school fees. The pandemic has in fact seriously worsened the living conditions of the families of the Holy Land, where many found themselves without income from one day to the next. This highlights the fact that Eastern Christians, for the most part, live in countries that do not offer them such a solid social and health care system, as in the West or Israel. The Latin Patriarchate, whose school system welcomes pupils of all religions and religious denominations, recently made an appeal with the request for financial support, to allow the 12,456 pupils enrolled in the 38 schools of the Latin diocese present in Palestine and Jordan meet their financial obligations. Christian schools are among the most renowned in the Holy Land.

Oriental Christians – Syriacs, Copts, Maronites, Greek-Melkites, Greek-Roman Catholics and Ukrainians, Ethiopians, Eritreans, Syro-Malancarese, Syro-Malabaric, Chaldeans, Armenians, and Latins – gathered in prayer. That was the spirit of the day organized in France and in the Christian East.