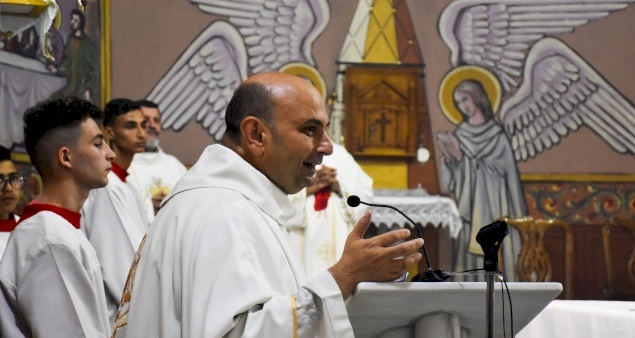 GAZA – For the past three years, Fr. Gabriel Romanelli, IVE, has served the Latin parish of the Holy Family, located in the heart of the Gaza Strip.

I’ve been serving the Latin parish of Gaza for three years. But I have been in the Middle East for more than 27 years: after joining the Institute of the Incarnate Word[1] (IVE) in 1988, I was ordained a deacon in Egypt in 1996, then I spent four years in Jordan as a vicar. I then did a license’s degree in philosophy in Rome to join the Latin Patriarchate as a professor at the seminary and for the Franciscans. For fourteen years, I taught philosophy there while carrying out other missions for my congregation, such as opening a house for handicapped children in Bethlehem. In 2005, I also began to participate in the aid provided in Gaza. I was also provincial superior for the Middle East and Africa, before being appointed parish priest of Gaza in 2019.

Since the Christian community in Gaza is very small (1077 Christians, including 133 Latin Catholics, out of a total population of 2,300,000[2]), and since travel is difficult, the commitment of the parishioners is very strong. The participation in the many activities that we offer – summer camps, open days for family, times of adoration, spiritual formation, scouts... – is huge. Of course, this is a trend that can be found almost everywhere in the Middle East, as the Church acts not only as a spiritual but also a social center. In Gaza, however, it is particularly evident. For example, during Easter, 87% of the Catholic faithful participated in the entire Easter Triduum... plus 250 Orthodox! Since we live in Muslim territory, our community pulls together, participates, and shows solidarity that is not found anywhere else.

This is an aspect that we must consider as a parish. The unemployment rate in the Gaza Strip is very high: between 50 and 70% of young people do not have a job, and most of the population lives in poverty. We have therefore set up several initiatives to deal with these situations: the Saint Thomas Aquinas training center for Christians, university training, the Saint Anthony group to provide material aid to families, help for handicapped children... Not to mention the three Catholic schools in Gaza, which employ about 100 teachers. So our parish is not only active on the spiritual and social level, but also on the educational, health and material levels.

In 2020, there were more than 60,000 cases of COVID in the Gaza Strip. The Church has acted on about 60% of these cases. While respecting the health instructions of the authorities, we were able to keep the parish open, organize vehicular intervention groups, and set up solidarity and health initiatives. Although it was a complicated and sometimes difficult time, it was also a time of extraordinary sharing and support.

His name is Abdallah Nasser Jildeh. Of Greek Orthodox origin, he was – like many – very active here in our parish. For a time, he led our group of altar servers, before expressing the desire to be consecrated in the Catholic Church. After making his formal entrance, he became a postulant and then a novice. Unfortunately, he could not immediately obtain a permit to leave Gaza, so he did his novitiate here in our parish before taking his vows in the community of the Incarnate Word. It is finally thanks to the Latin Patriarchate that he was able to get a pass to go from Eretz to the Jordanian border. From there he was able to go to Rome and begin his studies. His desire is to become a missionary priest; he has expressed the vow to "become a defender of life", to bring Christ to the whole world.

[1] Missionary congregation born in Argentina in 1984, whose charism is the evangelization of cultures through the spirituality of the incarnation.

[2] According to the latest statistics.