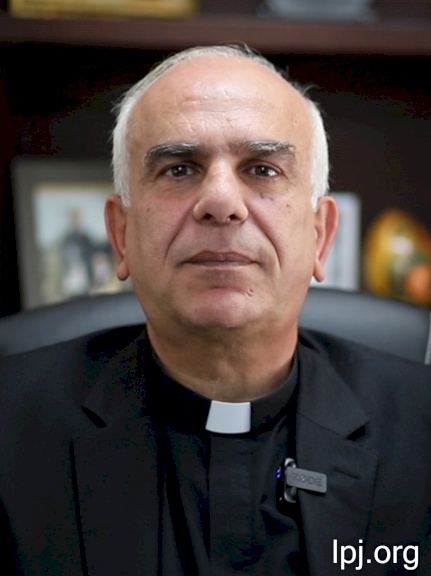 Fr. Jamal Daibes was born in Zababdeh, Palestine on July 7th, 1964. After joining the Minor Seminary of the Latin Patriarchate, he completed his studies in the Major Seminary and was ordained to the priesthood by His Beatitude Patriarch Michel Sabbah. After serving as Parish Vicar in Amman, he was appointed Parish priest in Al Wahadneh where he served for 4 years. In 1994 Fr. Daibes was then sent to complete studies in Dogmatic Theology at the Pontifical Gregorian University in Rome where he received the degree of Doctor in Theology with a dissertation on the dialogue between the Catholic and the Orthodox Churches. He has taught at the Latin Patriarchal Seminary and has since then served in various positions at Bethlehem University, where, in 2008, he was made Dean of the College of Arts. In 2009, Fr. Jamal was invested Canon of the Holy Sepulchre by His Beatitude Patriarch Fouad Twal. From 2013 to 2017, he was Rector of the Patriarchal Seminary in Beit Jala. In 2017, he was appointed parish priest in Ramallah, and in 2019 he was appointed Director of the Latin Patriarchate Schools in Palestine. On August 15th, 2021, Patriarch Pierbattista Pizzaballa appointed him as Patriarchal Vicar for Jordan.