COMMUNIQUE – The Heads of Catholic Churches in the Holy Land, on Sunday afternoon warmly welcomed the announcement made at noon today by His Holiness Pope Francis of his intention to visit Amman, Bethlehem and Jerusalem between the 24th and 26th of May. They expressed confidence that this visit will not only be an international event, but it will  mainly be a message of love and brotherhood to all the inhabitants of the countries he will visit.

It should be mentioned that in his announcement, Pope Francis highlighted that his visit to the Holy Land will be a pilgrimage that will commemorate the 50th anniversary of the ecumenical gathering that was held on January 5, 1964 at the Basilica of the Holy Sepulcher in Jerusalem between Pope Paul VI and Ecumenical Patriarch Athinagoras (of the Orthodox Churches).

A similar ecumenical gathering is expected in May at the Basilica of the Holy Sepulcher between Pope Francis and contemporary Ecumenical Patriarch Bartholomew, aiming to highlight the desire for unity among all churches.

The Assembly of Catholic Ordinaries of the Holy Land expresses joy for the decision of Pope Francis to visit the Holy Land and insists that this visit aims mainly at spreading and promoting love, cooperation and peace among all inhabitants of the region, as to promote better relations among followers of various religions and advance ecumenical work among Christians of the different churches.

Assembly of Catholic Ordinaries of the Holy Land Christmas 2020: Statement from the Latin Patriarchate of Jerusalem 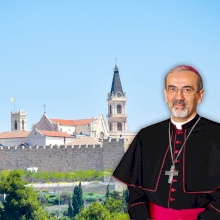