MADABA – On Tuesday, June 6, 2017, the children of the CE2 class at the French school in Amman participated in a mosaic workshop, part of the “Living Mosaics” project. This initiative launched by the Latin Patriarchate in August 2016, offers an activity for Iraqi refugees while training them in the new profession of mosaic-making, a historical Jordanian art.

In the courtyard of the Greek Orthodox Church in Madaba, forty young children listened attentively to the explanations given by Raghda, project director and trainer of the “Living Mosaics” project.  ” For this first experience, the apprentice mosaicists each had a small square of fabric in front of them and work to produce their own mosaic according to the ancient Jordanian method. One by one, the small colored stone squares are glued with a mixture of water and adhesive powder on the fabric. This preparatory work will be placed in a wooden frame and a little cement, poured in reverse will set the work permanently.  The children conscientiously focus on the work; some carefully follow a model and others with a creative soul of an artist prefer to make their own mosaic design.

This workshop is the culmination of a year-long work on the mosaic for the CE2 class. “Jordan has an exceptional artistic heritage that we are happy to introduce to our students,” explains Valérie, a teacher. “This kind of artistic awakening workshop requires a lot of organization but it is really interesting for the children. It is another way of learning!”  At the end of the morning, the students marvel at their small work and polished with care by one of the Iraqi artists, the educator for the occasion. Raghda, the director of the “Living Mosaics” project, welcomes this cultural exchange which allows the Iraqis to share their expertise. It is also a way to make the “Living Mosaics” project animated in a different way through education.

“Living Mosaics”, a project to support the Iraqi refugees in Madaba

In the face of the massive influx of Iraqi Christian families fleeing the ISIS terror, the “Living Mosaics” project was conceived in August 2016 by the Latin Patriarchate of Jerusalem, which provides financing in cooperation with the German Knights of the Holy Sepulcher.  It is also supported by Caritas Jordan and the French Embassy. The Patriarchate provides equipment and the necessary raw materials to produce the mosaics, which are made in the Greek-Orthodox parish of the historic town of Madaba, about 30 kilometers south of Amman. For most of these refugees from Iraq, who were active in the fields of education, finance, engineering or architecture, the “Living Mosaics” project is an opportunity to acquire new skills in the production of mosaics rather than staying idle throughout the day.

This handicraft consists of making different types of mosaics by means of simple tools (hammers and pliers), with mosaic stones, glue, paint and wooden frames.  Several workshops are required to make a mosaic, to prepare the raw stone, to the meticulous putting together of small pieces of stones that will give shape to the mosaic. The mosaics are for sale and the proceeds will cover the costs of the activity and support the families. The project currently employs fifteen Iraqi Christian families and each person receives JD 10 daily, an amount that may cover daily expenses. The purpose of these workshops is also to prepare for the future of these families, who for the most part are far from their native land. Many refugees are waiting for a visa to a new destination, mainly, Europe or Australia, the latter having already received a large number of refugees from Syria or Iraq.

The mosaics of Madaba made by Iraqis adorn a number of Jordanian churches and some have been exported as entire frescoes to Canada! From a small box to the large picture, it is possible to order a custom-made model! 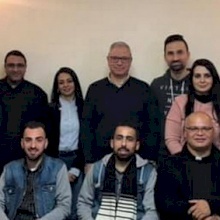 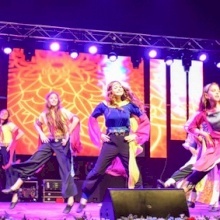 Youth of Jesus’ Homeland presents the story of the “Ibn-El-Balad Festival...

“Desert Flower" weekend to share the treasure of faith