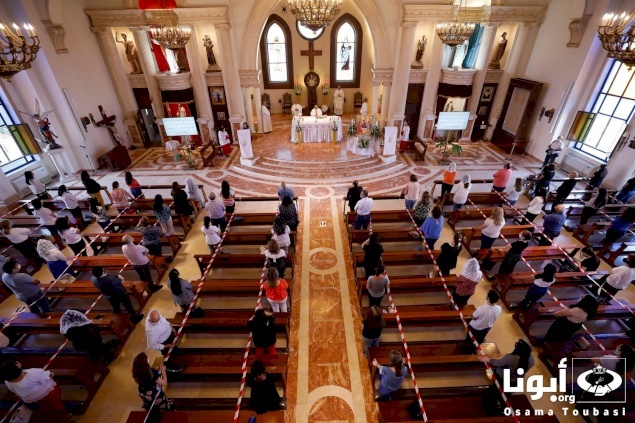 Jordan: Prayers resume in churches amid precautionary measures Available in the following languages:

JORDAN - Christians in Jordan have resumed praying in the Kingdom's churches after a three-month hiatus, since mid-March 2020, which aimed at stemming the spread of COVID-19.

In a statement issued by the Catholic Center for Studies and Media (CCSM) in Jordan, CCSM Director Fr. Dr. Rif'at Bader said: "We joyfully and proudly return today to Churches after a three-month hiatus during which the believers prayed resorting to social media networking sites. But today, the believers flocked on Sunday to the churches to pray thanking the Lord for the blessing of security, stability, and health."

He added, "They highly value the efforts exerted in this direction foremost of which are the skillful efforts of His Majesty King Abdullah II Ben Al-Hussein, His Highness Crown Prince Al-Hussein Ben Abdullah II, the government, the Ministry of Health, the security apparatuses, the Arab army, as well as all the popular and official functionaries whose main concern was to preserve human health, dignity and life, in addition to the lives of the extended families.

In his Sunday homily, Bishop Shomali said: "We are joyful that the churches opened this Sunday morning to receive the masses of believers. We are also pleased that the people have complied with the instructions issued by the Ministry of Health and the Ministry of Information to maintain distances, using sanitizers, abstain from using prayer books, and ensuring that the elderly and the young do not attend Masses. Thanking God for all this, we hope that things will improve and the status quo ante would be restored."

Holy Masses were celebrated in the Churches amidst full compliance with the instructions and directives that were posted on social media networking sites, whether issued by the Ministry of Health, the Public Security department or the Council of the Heads of Churches. The CCSM had earlier posted a video containing guidelines and instructions.
This morning, church pastors focused in their short homilies on the need to preserve the achievements attained by the homeland in its capacity as a coherent family. They also called for extending a helping hand to the poor and the needy. In this context, gratitude was extended to Caritas Jordan and to all charity associations that have been presenting basic aid to needy families, the sick, and the elderly.

Concluding his statement, CCSM Director Fr. Bader said: "Our Jordanian citizens are enlightened as they are aware of the size of the social and personal responsibilities they are shouldering which aim at preserving the achievements attained in the past months so that Jordan would remain an oasis of security and stability, as well as an area free from COVID-19. We are very grateful for these efforts that have been made, and we look forward to a secure and stable future, under the Royal guidance as well as the awareness and commitment of citizens.''