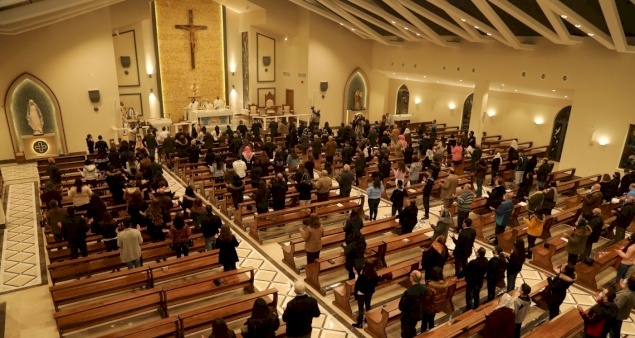 JUBEIHA, Jordan - After more than nine years of construction works, the parishioners of Jubeiha are finally able to enjoy their new Church of St. Paul the Apostle. On February 14, 2021, and on the occasion of the World Day of the Sick, Bishop William Shomali, Latin Patriarchal Vicar in Jordan, celebrated his first Mass in the church with the parish priest Fr. Butrus Hijazin and his vicar Fr. Suleiman Hifawi.

The idea to establish a parish in Jubeiha, located about 10 kilometers to the northwest of Amman, was started in 1988 by Fr. Labib D’aibes, a Latin Patriarchate priest. In 1980, Jubeiha was home to around 200 Christian families. At that time, there was little housing in the area, and the lands were agricultural. However, the number of Christians increased with the parish school’s construction (1993), its expansion (2000), and the desire of people to live in a quieter and more affordable area in the Amman Governorate. Nowadays, Jubeiha counts 1,200 families who follow the Latin rite. The presence of the new long-awaited Church will now serve the northern part of the Amman Governorate, which comprises 12,000 Christians.

The project began in 2011 with the support of the local community and private donors. Mr. Omar Naber, a parishioner and a Knight of the Order of the Holy Sepulchre, donated the land for the Church’s construction; he also made financial contributions towards the first and last construction phases. However, due to a shortage of funds and the expansion of the project, construction works were put on hold as it became clear that it needed significant financial investment.

In September 2017, the newly appointed Governor-General of the Equestrian Order, Leonardo Visconti, visited Jubeiha and saw the potential of enlarging and completing the Church. Shortly after that visit, the parish received the financial commitment from the Equestrian Order of the Holy Sepulcher and the Grand Magisterium in Rome. Later, the Order paid for additional works in the Church that resulted from, among others, the increase in the Christian population in Jubeiha over the years. Another extra work included installing the stained-glass windows, depicting the Patron of Jubeiha Church, St. Paul the Apostle, as well as other biblical figures.

In March 2020, as the COVID-19 pandemic reached Jordan, its government imposed a country-wide lockdown to contain the Coronavirus spread. Consequently, construction works in the Church ceased until June 1, 2020. Despite various delays, the works were completed in December 2020, which allowed the celebration of the first Mass by the parish at Christmas.

Today, the Church can accommodate approximately 1,000 faithful and is equipped with a large parish hall on the basement floor amongst other facilities. The parishioners are now able to celebrate liturgical events properly and participate in parish life. Before the construction of the Church, they would attend Masses in the hall of the school. 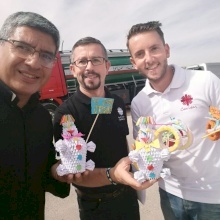 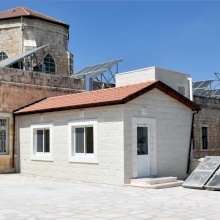 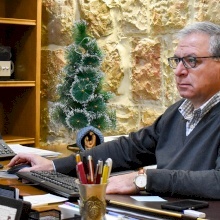