Justice and Peace Commission: Being a Christian Palestinian in Jerusalem in 2020 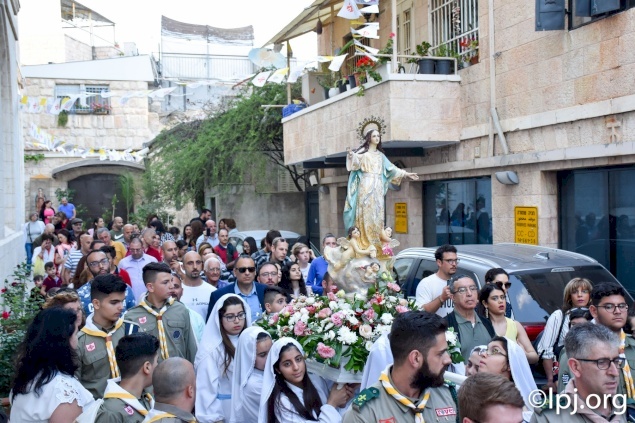 Justice and Peace Commission: Being a Christian Palestinian in Jerusalem in 2020 Available in the following languages:

Assembly Of The Catholic Ordinaries

Of The Holy Land

Being a Christian Palestinian

1. The uncertainty about the future of Jerusalem has recently deepened as a consequence of the initiatives sponsored by the United States of America and by Israel. These unilateral moves render any just peace even more difficult to imagine. Israel has proclaimed Jerusalem its eternal unified capital. However, the Palestinians claim East Jerusalem as their capital. The international community wavers, giving contradictory signals after the United States’ recognition of Jerusalem as Israel’s capital, resulting in the transfer of the US embassy to the city. Yet, the Holy See reiterates its position, claiming a special status for the Holy City, so that people of all religions can visit the city’s holy places and worship freely there without fear.

2. In the light of these troubling developments, Palestinian Jerusalemites are raising important questions about their own future and the attitude they should adopt towards these realities. In particular, Christian Palestinian Jerusalemites, because of their small number, making them even more vulnerable, struggle with the impression that they are not taken into consideration and have no means to play a significant role in the future of their beloved city.

3. How can Christian Palestinian Jerusalemites engage with this struggle in the Holy City and take a stand? Observing the powers that be squabbling over their city, Christian Palestinian Jerusalemites find themselves on the side of their people, the Palestinians, suffering like them and hoping with them. However, some look around at the world in which they live and see mounting religious extremism, devastating division within society and a political vacuum, provoked by corruption and lack of creative vision. They also note the turmoil in many surrounding Arab countries and the heavy price Christians have often paid as war, chaos and destruction take their toll.

4. While some Jews claim an exclusively Jewish Jerusalem and some Muslims claim an exclusively Islamic Beit al-Maqdis, some Christian Palestinian Jerusalemites might be tempted to withdraw from public life, clinging exclusively to their own religious identity. They might insist that they are simply Christian and that is enough for them. As regards the present status and future of Jerusalem, they might think only in terms of Jerusalem being their home: a Holy City, disregarding whatever the regime, political or national, may be.

5. However, religious identity as important as it might be for a person’s identity, is always incarnate in a specific historical, cultural and geographical context. Religious identity alone is not enough to secure the future of Christians in Jerusalem. Limiting identity to religion runs the risk of living in a vacuum, detached from land, people and time, from the very reality that defines life lived to the fullest.

6. Christians are indeed disciples of Jesus Christ. Like him they live in a concrete place at a specific moment of history. The specificity of Christian Palestinian Jerusalemites is the fact that they live in the city of Jerusalem, the heart of the world for so many believers and the center of Palestine/Israel today. Just as Jesus of Nazareth fulfilled His mission in the concrete circumstances of His time, so also His disciples have a mission in the time and place in which they live. As members of the Palestinian people, Christian Jerusalemites are called to carry out their mission among their people and in their land, even if difficulties abound.

7. Jerusalem is both Holy City and city of daily life. Indeed, these two dimensions are inseparable. As Holy City, Jerusalem is shared with all people of faith throughout the world, Jews, Christians and Muslims. Yet as city of daily life, Jerusalem is shared with all Palestinians and Israelis. Palestinians aspire to establish their own state with East Jerusalem as its capital. Palestinian Jerusalemites cling to both aspects of Jerusalem, a city that unites them with the dreams and aspirations of their people and a city that palpitates as the heart of great universal religious traditions.

8. The Heads of the Churches in Jerusalem published statements on Jerusalem in 1994 and 2006, which underlined this particular context. Jerusalem must be recognized as a city of its inhabitants, two peoples, Palestinians and Israelis. At the same time, and without contradiction, Jerusalem must be promoted as “Holy City”, spiritual capital for millions of faithful belonging to the three monotheistic religions. In the 2006 statement, the Heads of Churches declared: “Jerusalem, heritage of humanity and Holy City, is also the city of daily life for her inhabitants, both Palestinians and Israelis, Jews, Christians and Muslims […]. Holy places and living human communities are inseparable […]. Jerusalem, Holy City, heritage of humanity, city of two peoples and three religions, has a unique character that distinguishes her from all the other cities of the world; a character which surpasses any local political sovereignty […]”

9. Christian Palestinian Jerusalemites, solidly rooted in their personal identity, in its religious and national dimensions, can respond fully to their local and universal vocation, working for equality, justice and peace, contributing by all possible means to bring the conflict in Jerusalem to an end. Jerusalem can become again both a holy and a human city, a city of God and a city for all its inhabitants as well as an inclusive, open city that is accessible for all who seek to go there.

10. The commitment to this vocation was recognized and celebrated by Pope Benedict XVI on his visit to the Holy Land in 2009. During the Mass celebrated in the Kidron Valley in Jerusalem, on May 12, 2009, the Holy Father said: “Standing before you today, I wish to acknowledge the difficulties, the frustration, and the pain and suffering which so many of you have endured as a result of the conflicts which have afflicted these lands, and the bitter experiences of displacement which so many of your families have known and – God forbid – may yet know. I hope my presence here is a sign that you are not forgotten, that your persevering presence and witness are indeed precious in God’s eyes and integral to the future of these lands. Precisely because of your deep roots in this land, your ancient and strong Christian culture, and your unwavering trust in God’s promises, you, the Christians of the Holy Land, are called to serve not only as a beacon of faith to the universal Church, but also as a leaven of harmony, wisdom and equilibrium in the life of a society which has traditionally been, and continues to be, pluralistic, multiethnic and multireligious.”

11. In unity, all Jerusalemites together with all who love the city are called to cooperate in order to realize the vocation of the city called to be holy, making it, by their prayer and by the services they offer in it, a city of equality and justice. a city of peace for its inhabitants and for those coming from all over the world. Christian Palestinian Jerusalemites are both Palestinian and Christian, and thus they make their contribution to the holiness of the city and to the struggle for the dignity of all who live there. Thus, they witness to Jesus Christ, who lived and taught in Jerusalem, redeeming the world there, by his passion, death and resurrection.