AMMAN – On Monday, May 6, 2019, His Beatitude Theophilos III, Greek Orthodox Patriarch of the Holy City of Jerusalem, all Palestine and Jordan, thanked His Majesty King Abdullah II of Jordan on behalf of the Holy Land’s Christian community for covering the costs of the restoration of the Holy Sepulchre Church in Jerusalem at his personal expense.

The King’s donation comes from the Templeton Prize sum, which His Majesty received in November last year, and in implementation of his pledge at the time to dedicate a portion of the prize to restoration projects of Jerusalem’s Holy Site.

The donation comes two years after the conclusion of the restoration of Jesus’ Tomb, also on His Majesty’s expense, preceded by other contributions to restore Jesus’ Baptism site.

In a statement carried by the Jordan News Agency, Petra, the patriarch said that the donation reflects the King’s personal commitment to the security and future of Jerusalem as the custodian of Islamic and Christian Holy Sites in the city. 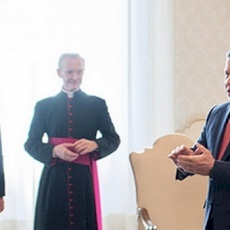