Latin Patriarchate: “Jerusalem is a treasure of all humanity that cannot be reduced to a territorial dispute and political sovereignty”

Latin Patriarchate: “Jerusalem is a treasure of all humanity that cannot be reduced to a territorial dispute and political sovereignty” Available in the following languages:

In these days, the declarations on Jerusalem and its future have multiplied and we are all worried about the violence that could be unleashed and the unpredictable consequences.

The Holy Father, also referring to the various UN resolutions, expressed his deep concern, asking that new pretexts not be created for more violence in the Middle East, but to preserve the Status Quo in the Holy City, which should guarantee level-headedness between the religious communities of the three faiths and between the two parts of the city, but which, in reality, has already been affected for some time.

Bearing in mind a situation of evident conflict and considering the rapid changes of the Holy City, we think that every unilateral solution cannot be considered a solution.

Indeed, Jerusalem is a treasure of all humanity. Any exclusive claim – be it political or religious – is contrary to the city’s own logic. Every citizen of Jerusalem and every person who comes to it on a visit or pilgrimage should be placed in a position to perceive and appropriate in some way the message of dialogue, coexistence and respect that the Holy City recalls and that often we hurt by our behavior. Jerusalem is a city that must welcome, where spaces must be opened and not closed. For too long its inhabitants are hostage to these continuous tensions that distort the character of it.

There is nothing that can prevent Jerusalem, in its uniqueness and unity, from becoming the national symbol of the two peoples that claim it as their capital. Israelis and Palestinians should reach an agreement that corresponds in some way to their legitimate aspirations and that respects the principles of justice. Unilateral decisions that change the current configuration of the city will not bring benefit, but only new tensions and they will remove the possibility of peace-making.

But if Jerusalem is sacred for Jews, Christians and Muslims, it is also sacred for many peoples from all over the world, who look to it as their spiritual capital, who come to it as pilgrims, to pray and meet their brothers in the faith.

The sacred character of Jerusalem is not limited only to individual sites or monuments, as if these could be separated from one another or isolated from their respective communities, but involve Jerusalem in its entirety, its Holy Places and its communities, with their hospitals, schools, cultural and social activities.

The two sides should take care to preserve the current universal character of the city and to spare no efforts to remain in the place where Jews, Christians and Muslims continue to meet along the streets of the Old City, each with their own mindset and traditions, linked so uniquely to each other.

The discussion on Jerusalem, therefore, cannot be reduced simply to a territorial dispute and political sovereignty, precisely because Jerusalem is unique, it is the patrimony of the whole world, and has a universal vocation that speaks to billions of people in the world, believers and non-believers.

A realistic solution to the problem of Jerusalem should include all these elements. 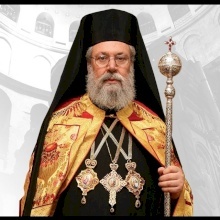 His Beatitude presents condolences for the passing of Chrysostomos II

Statement of the Latin Patriarchate of Jerusalem on the death of Shereen... 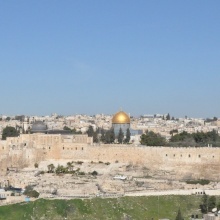 Congratulations to the Islamic World on the occasion of the blessed fasti...