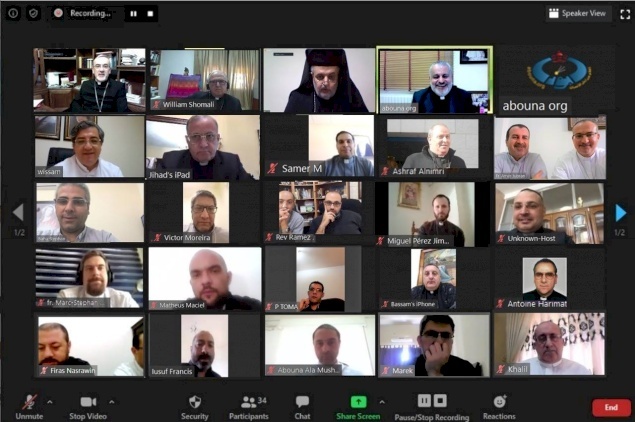 The Council of Latin Patriarchate Priests in Jordan, chaired by Latin Patriarchal Vicar for Jordan Bishop William Shomali has called for holding a spiritual retreat which was conducted this time by Zoom application.

Most Rev. Archbishop Pierbattista Pizzaballa, Apostolic Administrator of the Latin Patriarchate of Jerusalem, participated in the spiritual retreat during which he delivered an address from Jerusalem in which he thanked the priests for the assiduous efforts they exerted during the Easter celebrations and Corona pandemic. Latin Patriarchal Vicar for Jordan Bishop William Shomali delivered another speech about focusing on fraternal love and the duty to provide assistance to the needy.

The spiritual retreat was administered by Secretary of the Council of Priests Fr. Wissam Mansour and attended by Bishop Thomas Adly, Catholic Coptic Bishop of Jiza and Fayoum was hosted in Egypt. The meeting included prayers, psalms and hymns. The priests also discussed a host of pastoral issues concerning local church, especially in the period of church closures and which will hopefully take place shortly. The Catholic center for Studies and Media in Jordan had earlier called for holding a spiritual retreat confined to the Latin patriarchate of Jordan through Zoom application during which a large number of priests took part.