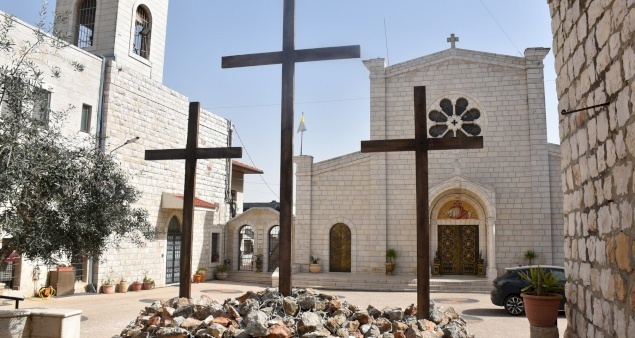 Lent 2022 in the Holy Land Available in the following languages:

HOLY LAND - For Lent 2022, the whole diocese of Jerusalem, which covers six vicariates and more than a dozen linguistic communities, put the three pillars of Lent, prayer, fasting and charity, back at the center of the lives of its parishioners.

As all the Catholics around the world prepare to offer the Good Friday collection to the Holy Land, everyone here also feels called to charity. From Amman to Cyprus, from Taybeh to Tel Aviv, many actions have been carried out in the parishes, as well as in the schools and youth movements of the Diocese.

For example, on the second Sunday of Lent, the Saint James Vicariate set up a collection of donations for the victims of war in order to support the association "Profeto", which helps refugees, for actions carried out in Ukraine and Poland.

Within the Vicariate of Cyprus, the four parishes are already very involved in all the actions of the local Caritas, as for many years, the island has been facing a constant influx of destitute people. In Nicosia, it was agreed that during the whole Lent period, some centers and the church itself offered heated shelter all day to the many homeless. In Paphos, a funding campaign, sent to Caritas Poland, has been organized to help Ukrainian refugees.

In Taybeh, the Legion of Mary arranged several actions, including a meeting in Jericho on March 17th and the parish held weekly meetings with the youth. The parish of Rafidia, near Nablus, kept bringing Holy Communion to isolated families in the area and, during this Lenten period, added a basket with basic products to which they barely have access. A piggy bank was made available to the catechism children in the classroom during Lent; the final amount will be donated to the Nablus retirement home run by Mother Teresa's Missionary Sisters of Charity.

Prayer and reflection are not forgotten either.

The Vicariate of Cyprus has dedicated each week of Lent to a meditation on the five statements made by the Pope during his visit to Cyprus, last winter. The five weeks of Lent were therefore devoted respectively to the Pope's speech at the meeting with the consecrated persons, priests, deacons, catechists and associations of Cyprus, the one at the meeting with the authorities and civil society, with the Holy Synod, then the homily at the Mass at the GSP Stadium and finally his speech during the meeting with the migrants in Nicosia.

In many parishes, such as in Taybeh and Rafidia, there were Stations of the Cross marking every Friday this time of conversion and prayer that comes before the joy of Easter. Retreats were organized as well, like at the Latin Patriarchate of Jerusalem, where the employees went to the Tantur ecumenical Institute for a day of prayer and exchange. The Benedictine Sisters of the Emmanuel Monastery in Bethlehem also offered a weekend of recollection for women - a way of breaking away from their daily lives in order to refocus on what is essential.

In Rafidia, numerous meetings on spiritual or biblical themes were held each week for the three youth groups of the parish, led by Fr. Miguel Perez Jimenez. With the older children, he also went to Jacob's Well and Mount Gerizim, and witnessed the joy of these young inhabitants of the Holy Land as they fully realized how much they are part of salvation history.

In Taybeh, the young people of the parish, led by Fr. Bashar Fawadleh, who is also the Chaplain for the Youth of Jesus' Homeland, erected a Calvary made up of three crosses in front of the village church, representing Christ and the two thieves, which remind us of our desire for conversion and of God's immense love for each of us.

Amidst the difficulties specific to each region, the parishioners of the Latin Patriarchate of Jerusalem have thus offered a Lent during which, "through these actions, experienced in love and communion, each one has placed all his/her people in the open hands of our Lord" (Fr. Miguel Jimenez), and prepared themselves, with hope, for the joy of Easter. 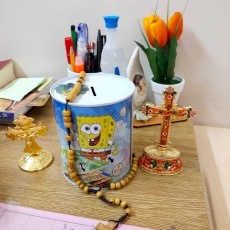 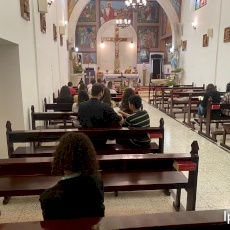 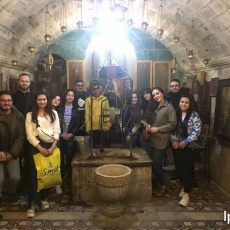 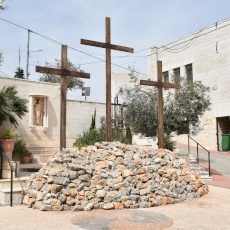 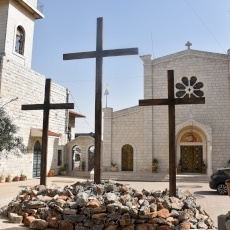