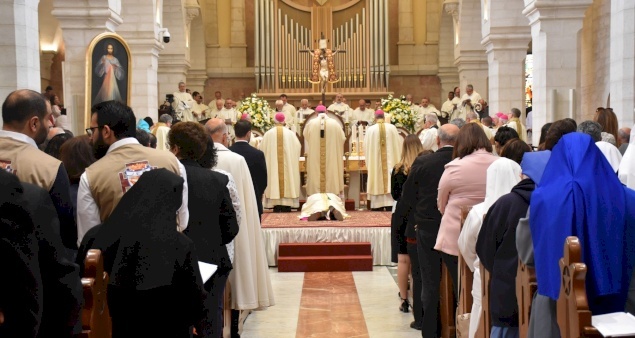 BETHLEHEM – After the episcopal ordination of Mgr Rafic Nahra, Patriarchal Vicar for Israel, it was Mgr Jamal Daibes who was consecrated bishop by His Beatitude Mgr Pierbattista Pizzaballa, Latin Patriarch of Jerusalem, in the church of Saint Catherine in Bethlehem.

The smile on his face said it all. Friday, May 6th, in the Franciscan church next to the Church of the Nativity, Mgr Jamal Daibes, Patriarchal Vicar for Jordan, joined the ranks of the bishops of Jerusalem one week after Mgr Rafic Nahra, consecrated in Nazareth. The latter was this time one of the co-consecrators with Mgr William Shomali, General Vicar for Jerusalem and Palestine.

Just like last week’s episcopal ordination, the celebration was also attended by Mgr Adolfo Tito Yllana, Apostolic Nuncio to the Holy Land, Patriarch Emeritus Michel Sabbah, and Fr. Francesco Patton, Custos of the Holy Land. In 1988, it was Mgr Sabbah who ordained Mgr Jamal, in the church of Zababdeh (Palestine).

During his homily, Patriarch Pizzaballa spoke of the relationship between Jesus and His Father, as well as between Jesus and his disciples. “Let this be the starting point of the episcopal ministry you are about to begin, dear Jamal. Both the Gospel chosen by Bishop Rafic and the one you have chosen, have as a central reference of the ministry, of “being in the world” according to the language of the Evangelist John, the necessary intimate relationship with the Lord.” He also reminded Mgr Jamal of the priorities of his future episcopal ministry: proximity, family, and formation.

At the end of the Mass, after receiving his episcopal attributes, it was a deeply moved Mgr Jamal who blessed the crowd cheering for him and gave his thanks to all. Reflecting his life journey, from the Seminary of Beit Jala to the Vicariate of Jordan, were the mayors of Bethlehem, Beit Sahour, Beit Jala, Ramallah and Zababdeh, who congratulated him personally during the celebration. 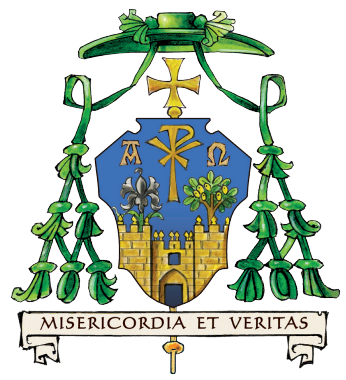 After the Mass, the scouts of Zababdeh, hometown of Mgr Jamal, performed inside the courtyard of the church, while the newly consecrated bishop received the congratulations of the assembly.