"O Lord, I love you:" Mass of Requiem for Pope Emeritus Benedict XVI 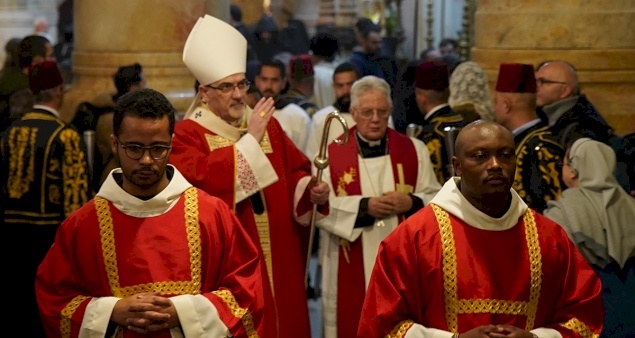 "O Lord, I love you:" Mass of Requiem for Pope Emeritus Benedict XVI Available in the following languages:

JERUSALEM – On January 10th, 2023, His Beatitude Pierbattista Pizzaballa, Latin Patriarch of Jerusalem, presided over the Pontifical Mass of Requiem for Pope Emeritus Benedict XVI in the Basilica of the Holy Sepulcher.

The bells of Pro-Cathedral tolled to announce the passing of His Holiness and to tell the faithful that the Mass was about to begin... Meanwhile, in the streets of Jerusalem, His Beatitude, accompanied by bishops and priests, walked in procession to the Basilica of the Holy Sepulcher, with the Kawas leading the way.

Concelebrated by Mgr Adolfo Tito Yllana, Apostolic Nuncio to the Holy Land, Fr. Francesco Patton, ofm, Custos of the Holy Land, Mgr William Shomali, General Vicar of the Latin Patriarchate, Mgr Rafiq Nahra, Patriarchal Vicar for Israel, Mgr Giacinto-Boulos Marcuzzo, bishop emeritus, and Mgr Yacoub Semaan, Syriac Catholic Bishop, the Mass was also attended by several other bishops representing the different Churches in the Holy Land. After it ended, the faithful made their way to the Patriarchate of Jerusalem to express their condolences to the Patriarch and his delegation.

Born on April 16th, 1924 in Bavaria, Germany, Joseph Aloisius Ratzinger was ordained a priest in 1951 and became a renowned professor and theologian. He pursued a career as professor of theology for twenty-six years, before being appointed Archbishop of Munich and Freising in 1977.  He was ordained a bishop on May 28th of the same year and chose as his motto Cooperatores Veritatis (Cooperators of the truth). In June, he was created cardinal by Pope Paul VI, and later became Prefect of the Congregation for the Doctrine of the Faith – an institution founded to defend the integrity of the Roman Catholic doctrine. In 2005, the papal conclave elected him as the new Pope. Referring to himself as “a humble laborer in the vineyard of the Lord” during his first speech as Pope, he served for eight years until his retirement in 2013. After stepping down as Pope, he devoted himself to writing and studying, before his death on December 31st, 2022, at the age of 95. His last words were “O Lord, I love you!”, reflecting his love for the Lord, whom he served all his life.

“We are here in front of the tomb of Jesus. It is an empty tomb…. There is no point in mourning death here,” said Fr. Francesco Patton in his homily after the Gospel of Saint John was read during the Mass, accounting the disciples’ first encounter with the empty tomb (Jn 20:1-9). “Here we are called to sing the “Alleluia” of the Resurrection, because, thanks to this empty tomb, we are given the grace to be able to live in God forever”, he added as he recalled the words of Pope Emeritus Benedict XVI during his pilgrimage to the Holy Land in 2009: “Jerusalem must be a place which teaches universality, respect for others, dialogue and mutual understanding; a place where prejudice, ignorance and the fear which fuels them, are overcome by honesty, integrity and the pursuit of peace.”

The Pope Emeritus longed to see peace manifest itself in the Holy Land. During his pilgrimage (May 8th-15th, 2009), he visited multiple interreligious sites, and urged the people of land to be pillars of peace. 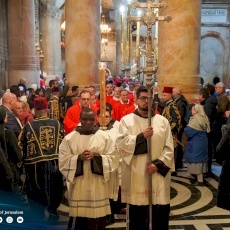 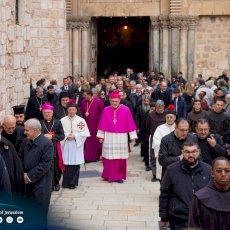 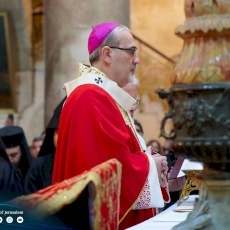 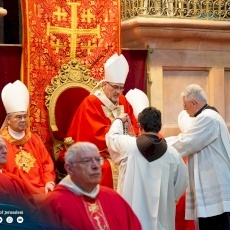 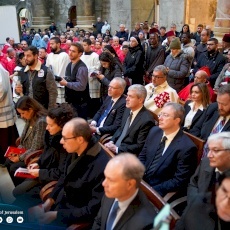 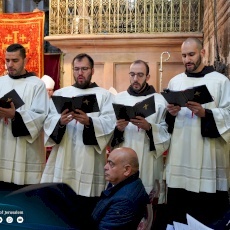 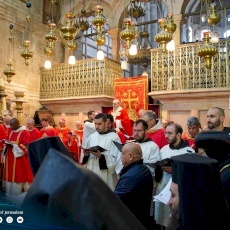 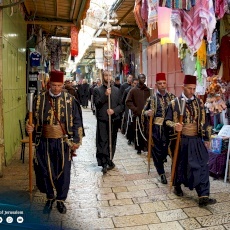