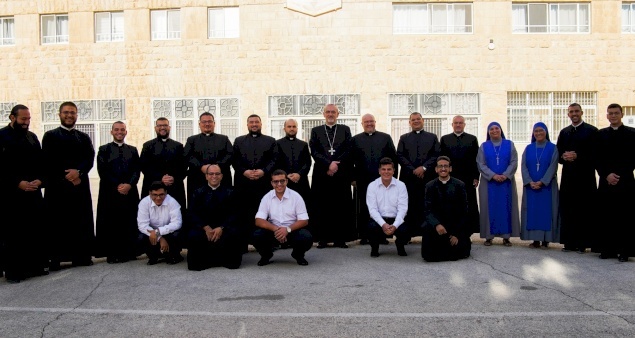 Patriarchal visit to the Patriarchal Seminary of Beit Jala Available in the following languages:

BEIT JALA – On the occasion of the opening of the Academic Year 2022-2023, His Beatitude Pierbattista Pizzaballa, Latin Patriarch of Jerusalem, spent a couple of days with the seminarians, the priests, and the staff of the Patriarchal Seminary of Beit Jala, which celebrates this year its 170th anniversary.

“To be a good priest, having good grades and strong spirituality is not enough. We must learn how to listen and how to shape communities. How to create space, instead of occupying it.”

Such were the words of Patriarch Pizzaballa during his opening speech on the evening of September 27th, 2022, as he addressed the priests, teachers and most of all students of the Patriarchal Seminary of Beit Jala, founded in 1852 by Patriarch Valerga. To mark the beginning of the new academic year, the Patriarch spent a couple of days at the seminary to meet each seminarian and teacher individually, as well as to take the time to speak with the staff. 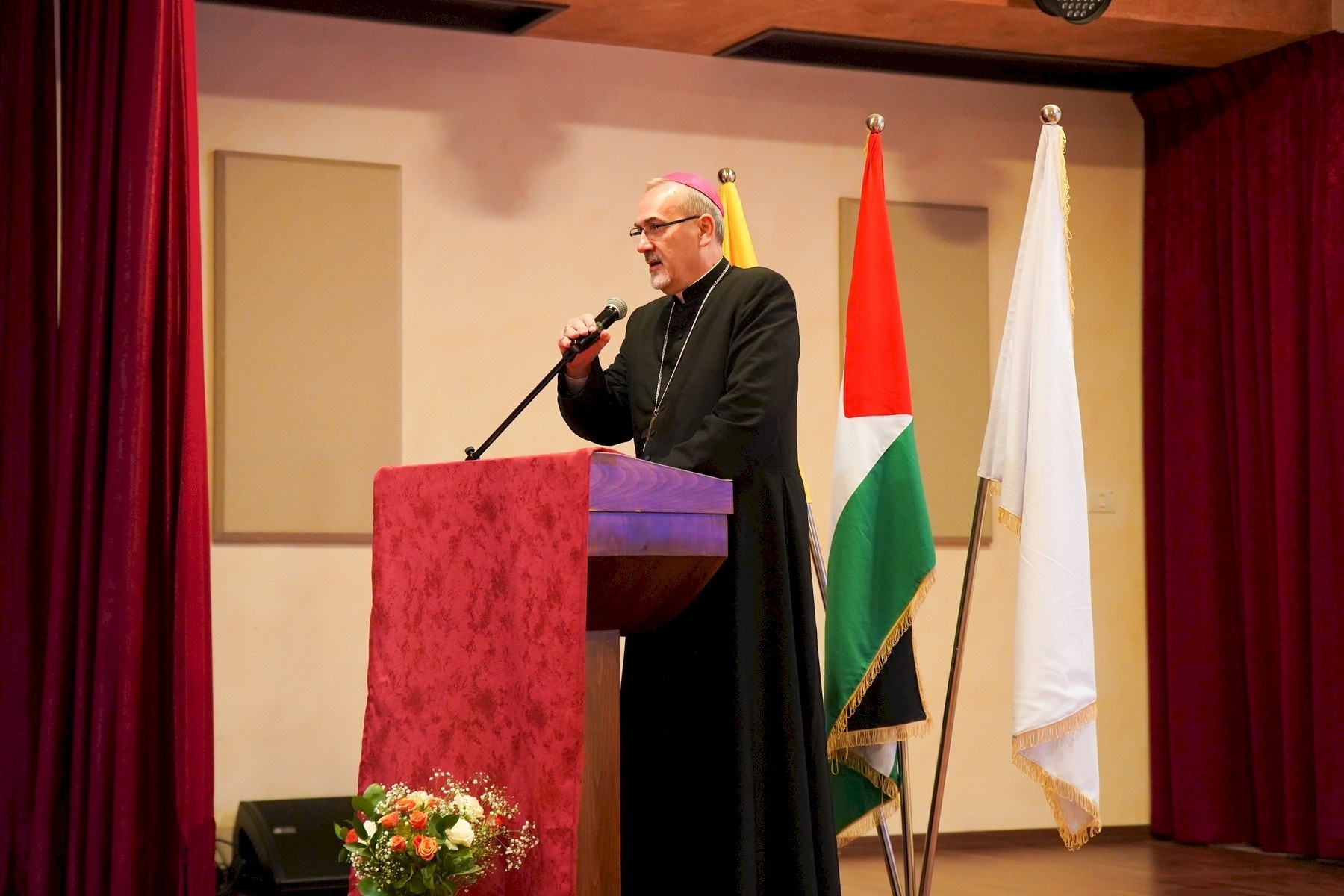 “Today, the seminary is at the very beginning of a transition period,” he explained. “We have several projects that we want to implement this year, especially regarding teachers and the connection with the laity. Our collaboration with several educational institutions, including Bethlehem University, will hopefully help us open our doors to all, and not to create a space reserved for those being formed to become priests,” he added, echoing the words of Fr. Iyad Twal, Executive Vice-President of the Bethlehem University. As of today, the Patriarchal Seminary is also affiliated with the Pontifical Lateran University in Rome.

“His Beatitude has a vision; to open the seminary to laity, to help them receive proper formations about religion and faith,” said Fr. Bernard Poggi, rector of the seminary. “This year, we’ll be working on a program for the formation of laity, to be started hopefully next year. This program also includes helping the Catechetical Office of the Patriarchate, led by Fr Remon Haddad, and our schools, working together to make sure that our teachers are formed well regarding religious topics.”

During the opening, both Fr. Tarek Abu Hanna, vice-rector of the seminary, and Fr. Tony Hain, financial agent of the seminary, presented their PhDs, respectively focusing on the Church and the Eucharist as covenants of salvation, and the social integration and recovery from mental health issues. The evening concluded with an award ceremony, and saw Fr. Adeeb Zu’mot, Fr. David Neuhaus and Fr. Peter Iorlano rewarded for their great contribution to the seminary, as well as the seminarian Abdallah congratulated for his excellent results as a seminary student. Because he was unable to attend the ceremony, however, it was another student, Yousef Haddad, who received the award on his behalf. 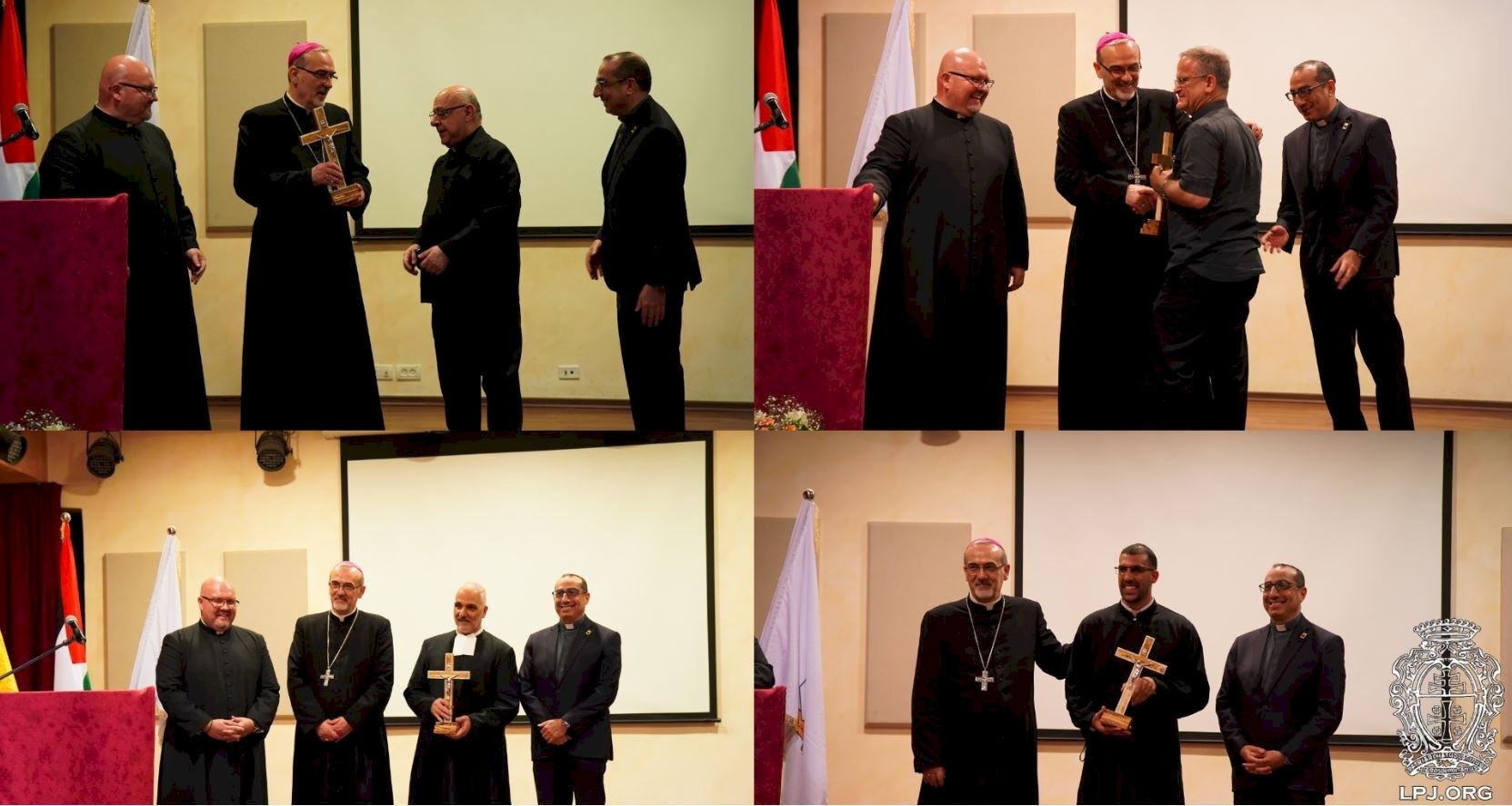 The next day, after a morning Mass inside the chapel of the Minor Seminary, the Patriarch met the staff of the Seminary, who spoke with him about some of the challenges they face as Christians in the Holy Land. They also took the time to thank him and the Church for the support they bring them. The visit ended with a meeting with the teachers, followed by a meeting with the seminarians, to discuss what each individual meeting with the Patriarch had highlighted, and to outline the main objectives for the year and the following years. 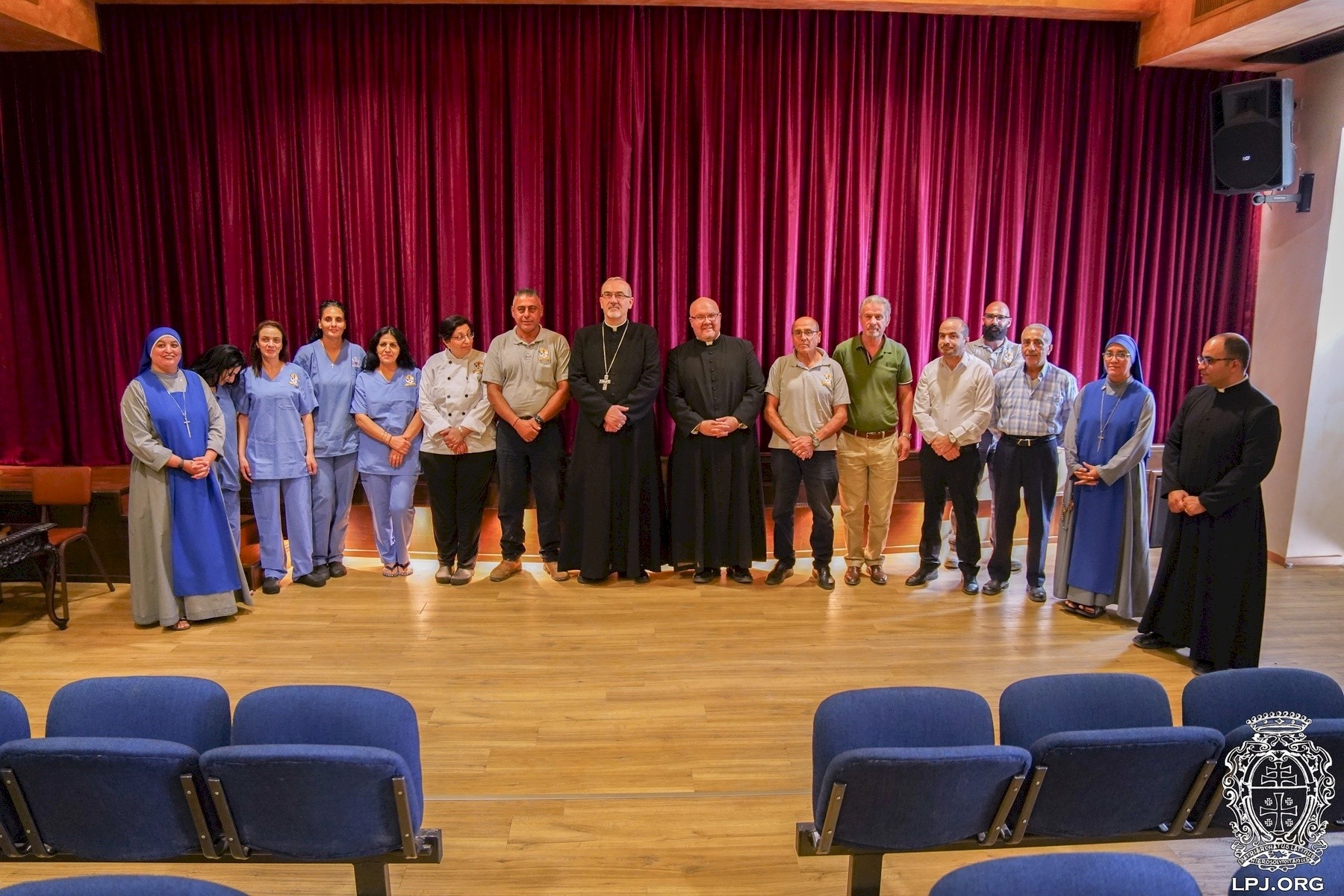 Meeting with the seminary's staff

“This new Academic year brings a lot of promises and hopes for the future,” said Fr. Bernard. “First, we are celebrating the 170th anniversary of the seminary as an institution of higher learning and formation. We are also starting programs to open our doors to others so that what we do here becomes better known. This reflects the motto we have chosen for this year, based on the Gospel of Matthew, 12:13, when Jesus says to the man with the withered hand, ‘extend your arm’. These words are of great significance, because they reflect both the hand that God sent out to humanity with the incarnation of His son Jesus Christ, and the extended arms of Jesus himself on the cross, without which humanity would not have received salvation. They also symbolize openness, and for us to open our hearts and hands to those around us.”

Recently, after encouraging priests to bring their parishioners here, the seminary has thus been receiving groups not only from the surrounding parishes but also from Galilee. They even had a youth group from the Franciscan parish of Bethlehem, who had never visited the seminary before. 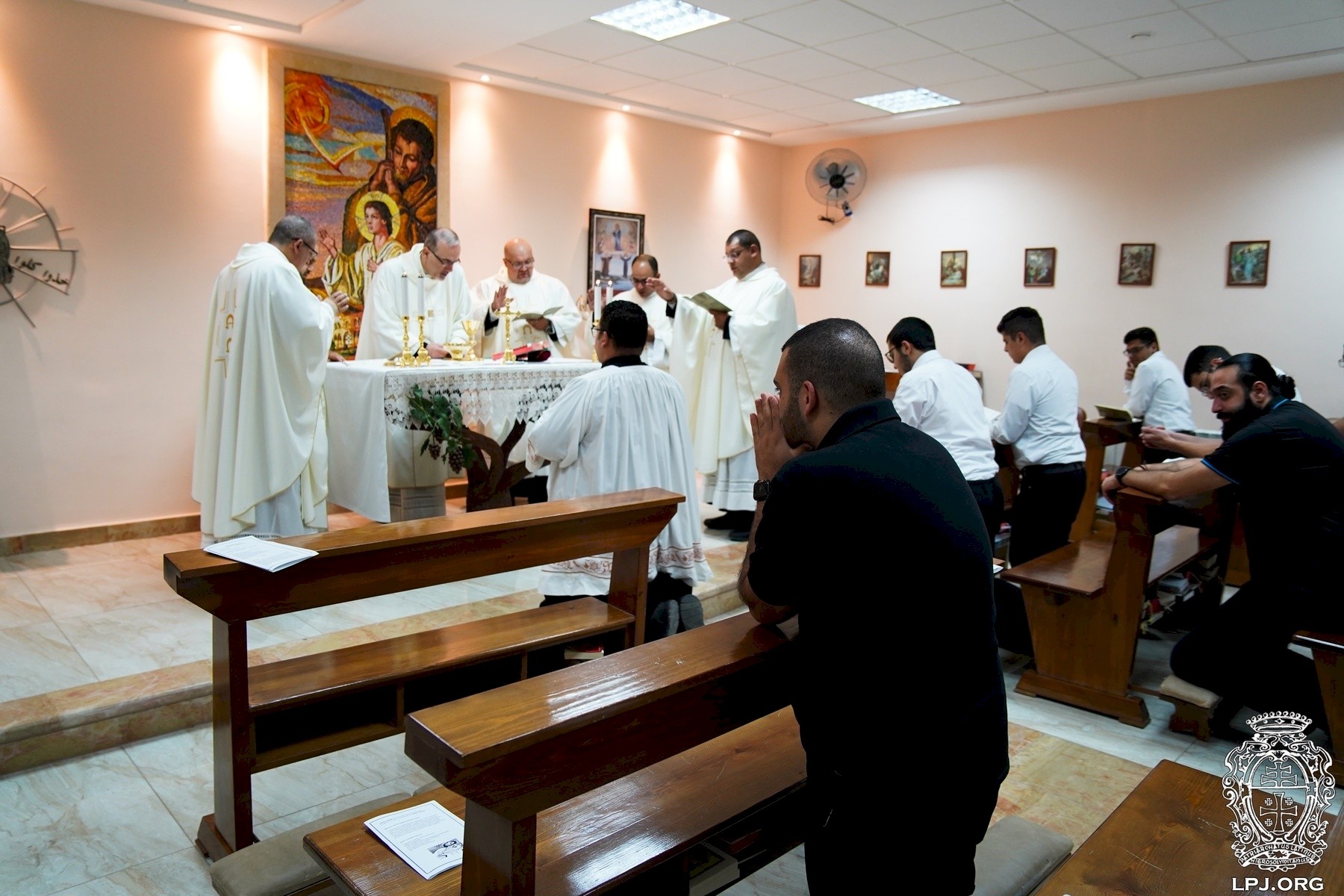 Mass with the seminarians presided over by the Patriarch

“We also participate more and more in the life of the institutions of the area,” explains Fr. Bernard. “Last week we had Mass at the Orthodox home for the elderly in Beit Jala, the Saint Nicolas Home. People were very happy to see members of the Latin and Orthodox Churches celebrating together.”

Hopefully, such initiatives will continue to strive in the future. “It is important that people from our communities see the heart of our diocese, that is, our seminary; not only to see how we prepare seminarians for priesthood, but also to receive something,” said the Patriarch. “Because the seminary should also be a place of encounter, to strengthen our faith and feeling of belonging to Jesus and to our community.”