Pizzaballa in Bari: "The way of the cross is proper to the experience of Churches of the Mediterranean" 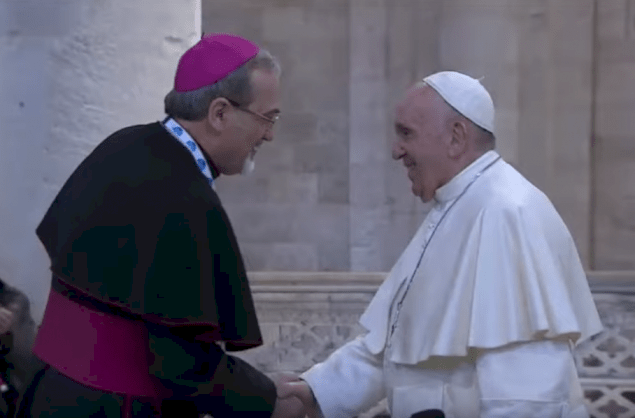 Pizzaballa in Bari: "The way of the cross is proper to the experience of Churches of the Mediterranean" Available in the following languages:

BARI – The “Mediterranean, Frontier of Peace” meeting took place in Bari between February 19 and 23, involving all the bishops of the regions bordering the Mare Nostrum (Mediterranean). At the appointment, initiated by the president of the CEI (Italian Episcopal Conference), Cardinal Gualtiero Bassetti, the Apostolic Administrator of the Latin Patriarchate of Jerusalem Archbishop Pierbattista Pizzaballa was also present.

The event that just concluded, born at the impetus of the Italian Episcopal Conference, brought together 58 bishops from the Mediterranean regions. The intent was to promote, in full synodal style, a discussion on the themes shared by the pastoral agenda of the Churches that overlook this sea: faith, fraternity, religious freedom, wars, and poverty.

Cardinal Bassetti, promoter of the event, said he was inspired by the suggestion of the well-known Mayor of Florence, Giorgio La Pira, today in the “odor of sanctity”: “the Mediterranean must return to being a meeting place for civilizations, a place for the development of Christianity, a frontier of peace. There are many injustices that take place on the shores of the Mediterranean, there are situations of war, extreme poverty, refugees. Today, the Mediterranean is a bundle of problems ...” Hoping then that, from Bari, a “peaceful but pastoral response from the Church” will be born.

The Apostolic Administrator, Archbishop Pierbattista Pizzaballa and the Custos of the Holy Land, Father Francesco Patton represented the Holy Land. The latter emphasized the opportunity to work together, also with Muslims and Jews, in the spirit of the Abu Dhabi Document signed last year by Pope Francis and the Great Imam of al-Azhar, Muhammad Ahmad al-Tayyib; in that direction, he continued, “religions can and must make a contribution of fundamental values ​​capable of supporting the culture of peace.”

The speech of Archbishop Pizzaballa

On Sunday morning, the final day of the Apulian event, Pope Francis reached the bishops at the Basilica of St. Nicholas and began to dialogue with them before the celebration of Holy Mass.

Archbishop Pizzaballa who, speaking to the Holy Father, summarized in three points the results the Bari meeting corresponding to a first phase dedicated to listening to each other, second, to the experience and proposals formulated, and finally to future prospects.

At first, the Apostolic Administrator described the general picture that emerged after four days of discussion and listening, unfortunately noting that “the fate of entire populations is enslaved in the interest of a few, causing functional violence to models of development created and supported largely by the West.” For this situation, the Archbishop did not deny a certain historical co-responsibility of the Churches, for which he apologized: “In the past, even the Churches have been functional in this model - just think of the colonial period -, and for this, today we must ask for forgiveness.”

Today, however, the situation is distinctly different, “being the Church no longer concerned with occupying or defending spaces of power, it has rediscovered the essentials of the Christian faith and witness.” This rediscovery must continue to inspire the Churches of North Africa and the Middle East who “pay the highest price.” being “decimated in numbers, remaining a small numerical minority; communities facing enormous difficulties and even persecution.”

In light of these critical issues, and helpless before the possibility of directing the decisions of the powerful by accessing international tables, the only plausible action to be taken is to continue to “build communities and relationships that place the person at the center in all contexts of our work: in schools, hospitals, in countless peace and solidarity initiatives.” Although these initiatives “will not change the world”, he added, they “will, however, contribute to creating contexts of peace and respect”, testifying “to our Christian style of being within these difficult realities,”

Dialogue is instead described as “the other form of expression of our ecclesial life.” A dialogue that in these areas manifests itself in the form of sharing between the Churches that co-exist and which ecumenically commits them to “establish interreligious committees especially with Muslim believers” with which it finds us “carrying out works of solidarity and sharing together. We want to make human brotherhood and solidarity grow and transform into concrete experience.”

Closing his speech, Archbishop Pizzaballa spoke about the role that the Churches of the Mediterranean will play in the near future: “in a complex and articulated reality like that of the Mediterranean, where plurality is the main feature of our societies, we are committed to taking charge of its many contradictions and, even if we will not be able to solve them, we will be able to learn and teach them to live them with Christian hope.