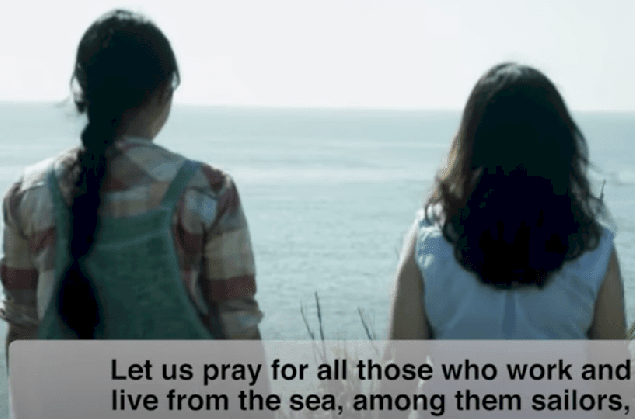 ROME - Pope Francis on Tuesday, August 4, 2020, released a video message containing his prayer intention for the month of August. He invites prayers for those “who work and live from the sea, among them sailors, fishermen, and their families”.

The Pope’s Worldwide Prayer Network, formerly known as the Apostleship of Prayer, organizes and disseminates “The Pope Video”.  The network is a pontifical initiative, whose mission is to pray and encounter the challenges facing humanity and the mission of the Church that concern the Holy Father, expressed in his monthly intentions.

Without seafarers, we would starve

“The life of sailors or fishermen and their families is very difficult,” Pope Francis notes in the video message in his native Spanish language.  “Sometimes they are victims of forced labor or are left behind in distant ports.”

“The competition of industrial fishing and the problem of pollution make their work even more complicated.”  However, the Pope admits, “without the people of the sea, many parts of the world would starve”.

“Let us pray for all those who work and live from the sea, among them sailors, fishermen, and their families,” the Pope urges.

Apostleship of the Sea

This is the third time in less than two months that the Holy Father has addressed the issue of maritime workers. On June 12, he sent a video message to the Catholic Church’s Apostleship of the Sea (AOS), in which he thanked the maritime workers and fisherfolk for their important contribution to feeding the people of the world.  Remembering the hardship they face, especially during the Covid-19 pandemic, the Pope encouraged seafarers in their work, assuring they are not alone or forgotten.

Sea Sunday highlights the vital work of Seafarers during the pandemic

On Sea Sunday, July 12, Pope Francis also greeted "to all those who work at sea, especially those who are far from their loved ones and their country."

Several Christian Church agencies and secular groups mark Sea Sunday each year.  They remember and pray for seafarers and their families, drawing attention to their indispensable work and contribution.

One of the sponsors of Sea Sunday, marked on the second Sunday of July, is the Apostleship of the Sea, that provides hospitality and pastoral care to seafarers, fishers and their families regardless of their nationality, creed, race or culture.

The Apostleship of the Sea uses temporary buildings, caravans, even disused containers in the docks to provide 20-hour information and access to telephones or the internet. These facilities enable seafarers to communicate with their families, despite their extremely limited time in port.

In many ports around the world, Stella Maris Centres work in collaboration with seafarers’ centers in partnership with other Christian Churches.

Ministering to seafarers since 1920, the Apostleship of the Sea says it is the largest ship-visiting network in the world. It provides counsel and support to people of the sea in 334 ports with 227 port chaplains in 59 countries.

Upon hearing about Pope Francis dedicating his August prayer intention to seafarers, the Apostleship of the Sea expressed its gratitude to the Holy Father. “Thank you Papa for remembering seafarers, fishers, and all those who make a living from the sea”, it wrote in a post on Facebook.

Along with “The Pope Video” of the August prayer intention, the Pope’s Worldwide Prayer Network also issued an infographic on seafarers, noting that the ocean is one of the most dangerous workplaces on the planet.

Among the hazards that maritime workers face are abandonment in distant ports, forced labor, death, injury, and the pollution of the sea.