Portraits of Sisters in the Holy Land, chapter 10: the Sisters of Saint Dorothy, Daughters of the Sacred Hearts 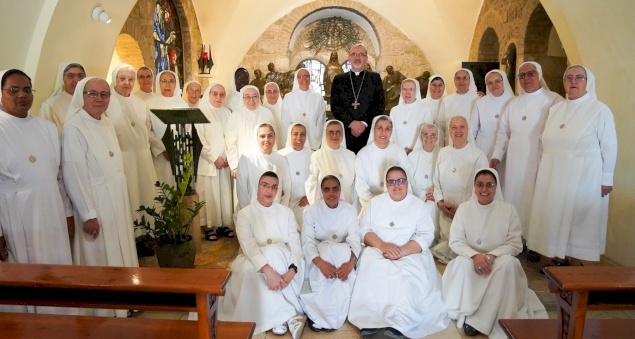 Portraits of Sisters in the Holy Land, chapter 10: the Sisters of Saint Dorothy, Daughters of the Sacred Hearts Available in the following languages:

HOLY LAND – They wear blue, brown or white… They work in offices, in schools, in institutions, in churches… They carry crosses around their neck, rings around their fingers, veils on their heads… They are the living stones of the Mother Church, the souls working discreetly to make the Church radiate. After meeting ten small female congregations in the Holy Land, lpj.org invites you today to visit the Sisters of Saint Dorothy, Daughters of the Sacred Hearts. 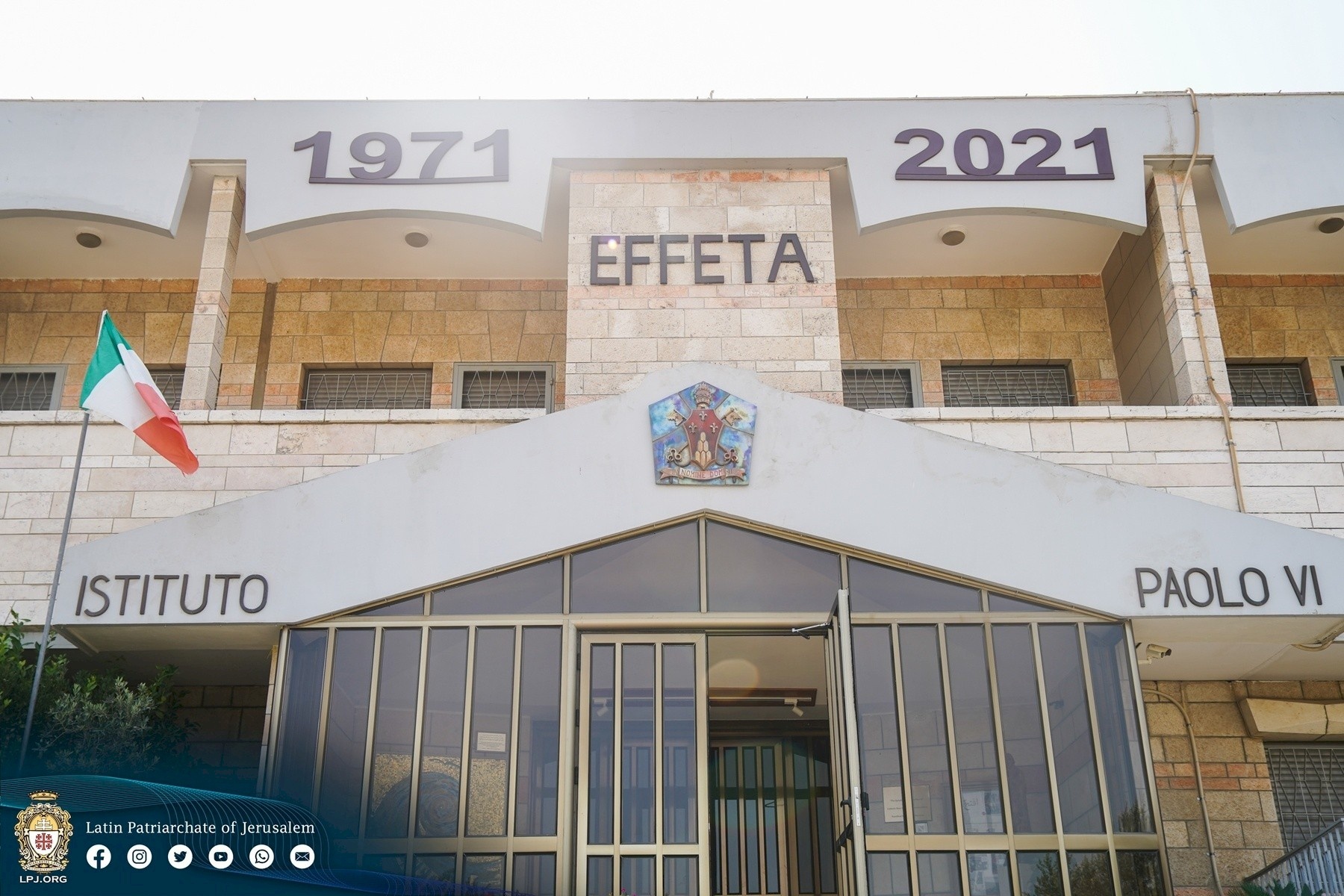 At the Effeta Institute, the Sisters of Saint Dorothy welcome deaf or hard of hearing children from kindergarten to high school

Founded by an Italian priest in November 1836, the Sisters of Saint Dorothy were originally dedicated to the education of poor girls. Today, they work in many social fields, including education, health and pastoral care.

Teachers with a "proven vocation"

It was San Giovanni Antonio Farina, then a young priest, who decided to create a congregation entirely dedicated to the education of young girls, after having been entrusted with the task of creating an institute for them. After several ups and downs, an establishment opened its doors in 1831 and welcomed 24 boarders. The staff was lay and salaried, but soon San Giovanni expressed the desire that the school be governed by "women totally dedicated to charity and to the formation of future generations, who would live in the institute according to their religious rule." 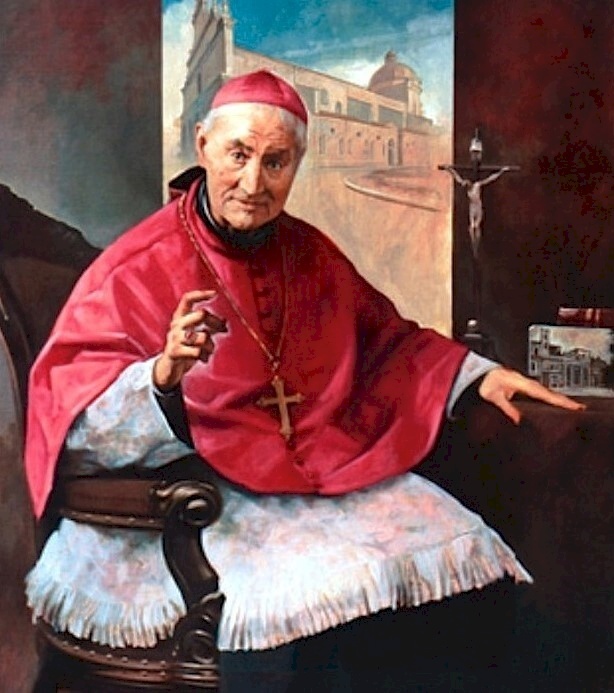 "At first, our congregation was really focused on educating poor girls," explains Sr. Anastasie, a Sister of St. Dorothy living in Bethlehem. "Then we started caring for the sick, the deaf and dumb and the blind. Today, we no longer have institutes dedicated to the blind, but we are still very present alongside the deaf and dumb."

After the death of San Giovanni, the congregation continued to grow. In 1924, it began to expand outside of Italy, particularly in Ecuador. In 1927, the Sisters of St. Dorothy arrived in the Holy Land, first in Deir Rafat, where there was an orphanage, a school and the shrine of Our Lady of Palestine, and then in the Latin Patriarchate and the seminary of Beit Jala. "We were in charge of the management of the place and the house there, just like at the Latin Patriarchate," says Sr. Anastasie. "We were also in the psychiatric hospital in Bethlehem, in Ratisbonne, in the Flagellation, in the convent of the Fathers of Betharam and in Akko. Today, we work in schools, especially in Jordan, in parishes, and some of us are nurses or doctors. We all work in the service of the poorest and most needy."

Today, the congregation is present in Jerusalem since 2008 (provincial house, formation and rest for the elderly sisters), in Upper Galilee at the service of the Melkite Church (pastoral care of youth, family, the sick and catechesis), in Zarqa and Jabal Al-Hashimyn in Jordan (service of parishes and schools of the Latin Patriarchate), and finally in Bethlehem (Effeta Paul VI Institute).

In 1964, Pope Paul IV – called “the Pope with a big heart” by the Greek Orthodox Patriarch Athenagoras I – made his first pilgrimage to the Holy Land. Struck by the large number of deaf children (the second most important handicap in the region) in Bethlehem and the surrounding area, he called for the foundation of an establishment dedicated to them. The Superior General of the Sisters of St. Dorothy, Sr. Irma Zorzanello, offered him a piece of land for the construction of this establishment. The Pope accepted... and asked them to take charge of the management of the future institute. Thus, on June 30th, 1971, thanks in particular to the Pontifical Mission for Palestine, but also to the interventions of the Patriarch of the time, Mgr Alberto Gori, Effeta Paul VI was inaugurated by Cardinal Maximilian of Fürstenberg, future Grand Master of the Order of the Holy Sepulchre.

"We had already started something on the site we owned, but the arrival of the Pope changed everything and accelerated the project considerably," explains Sr. Anastasie. "Everything was revised and after six years of work, the institute was able to welcome 25 students, including six from Jordan. This year, we welcomed about 200." 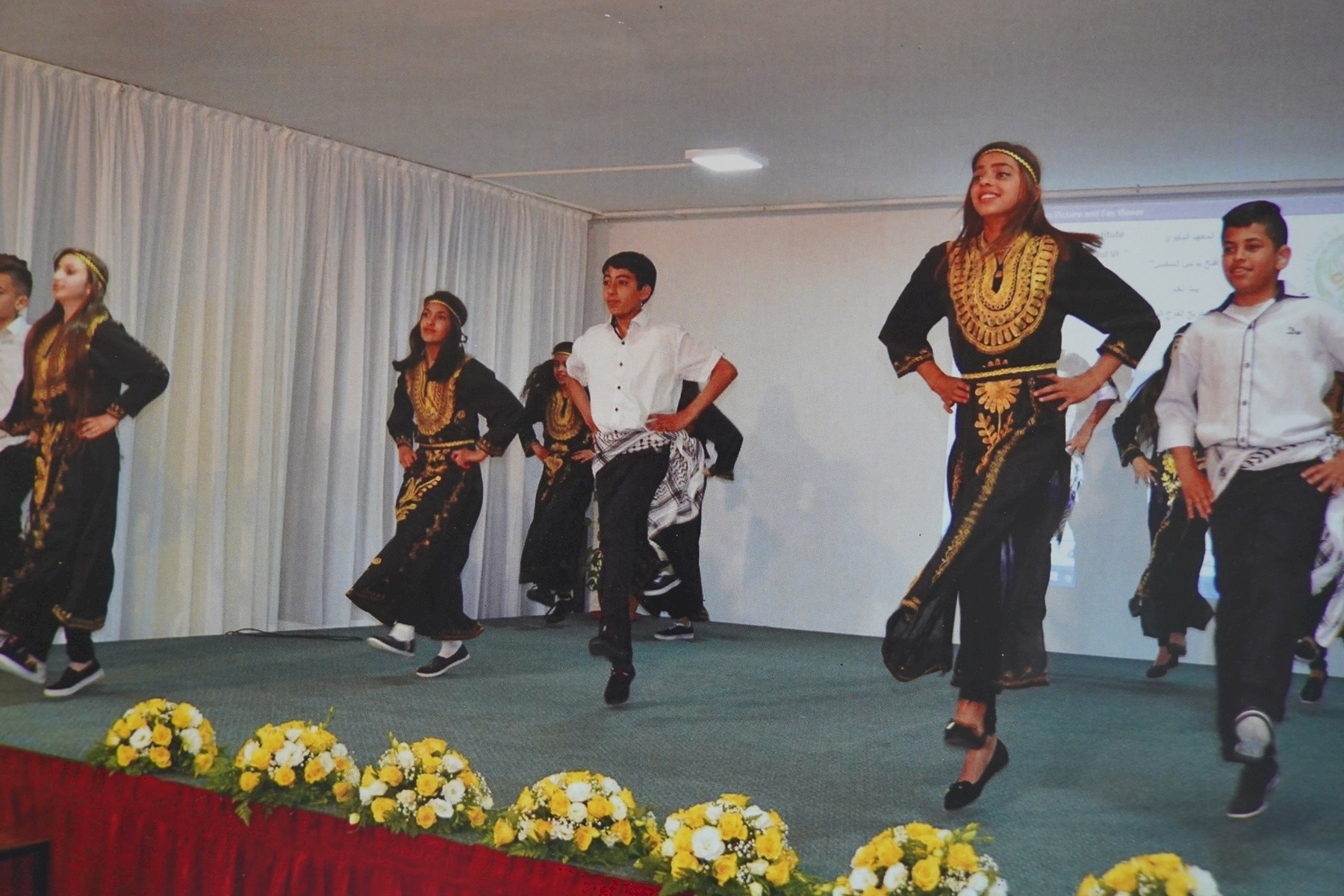 Today, more than 35 teachers and speech therapists work at Effeta to help deaf and hard-of-hearing students integrate into society and regain correct oral language. "The foundation of our institute is really speech therapy. We seek to give children the opportunity to express themselves and learn to speak when possible."

In order to maximize the chances of oral language recovery, Effeta serves students from less than a year old through 12th grade, in classes of no more than 15 students. "The earlier they start, the better the chances. Many arrive here without being able to speak a word, and then, thanks to daily speech therapy sessions, gradually become able to express themselves."

Currently, the institute is supervised by four Sisters of Saint Dorothy, including a Jordanian-born speech therapist, Sr. Amal Hijazeen. An Italian sister is also in charge of organizing manual activities for the students. But all of them manage the boarding school for young girls. "We offer accommodation to students who live far away and for whom it is difficult to travel because of the distance and checkpoints. Unfortunately, we only have a limited amount of space, so we only take in a few girls. Before, we also took in boys," explains Sr. Anastasie, who is responsible for the community. 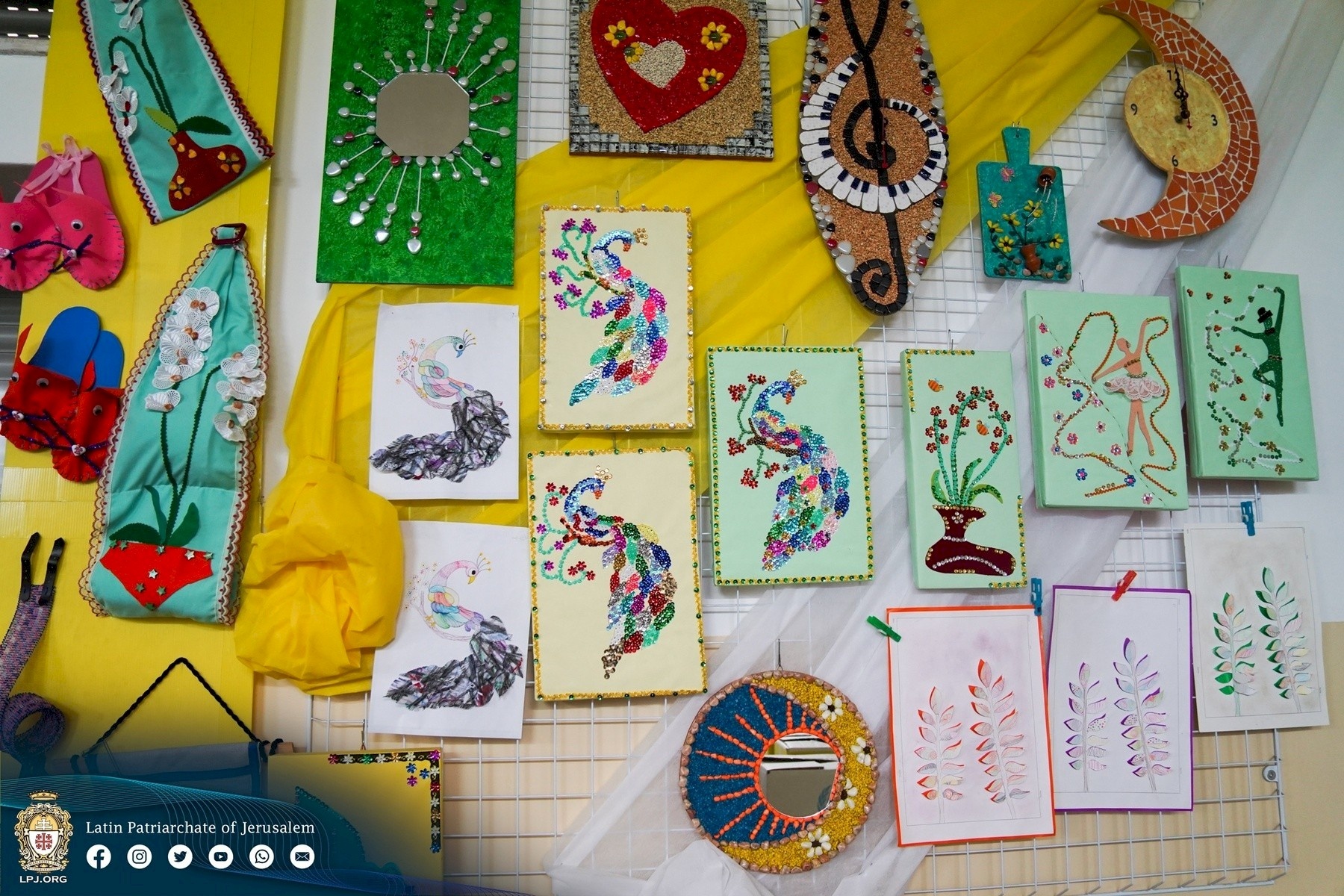 Manual activities occupy an important place in the life of the students of the Institute; the corridors of Effeta are resplendent with drawings, collages and various mosaics, original creations of the children.

One more Christian in the Holy Land

Unlike the majority of the Sisters of St. Dorothy in the Holy Land, who are mostly Italian or Jordanian, or even Palestinian or Arab-Israeli, Sr. Anastasie is Ivorian. She is the first sister of that nationality to come to the Holy Land; "it's quite a story," she smiles when asked. 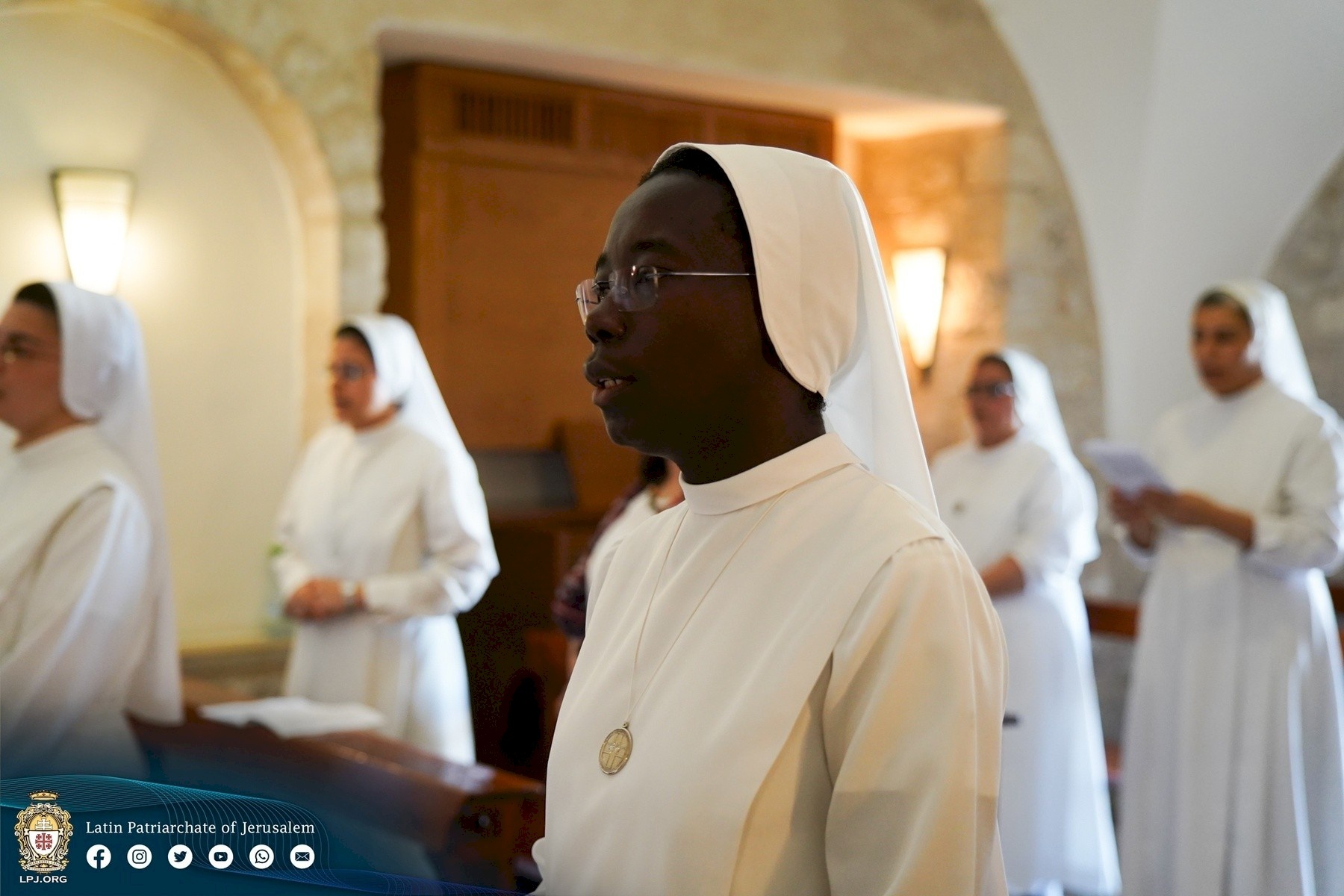 "My personal journey stems from two things; my religious vocation and my vocation to the Holy Land. I grew up in a very religious and practicing family, so I developed a desire to dedicate my life to the Lord at a very early age. I thus joined the congregation of the Sisters of Saint Dorothy, which was very active in my parish in the Ivory Coast, and then I went to Italy to begin my formation. I took my first vows in 2004 and my final vows in 2011. And I have been in the Holy Land for more than ten years."

From childhood, Sr. Anastasie developed a particular desire. "When I was little, I was very marked by the Good Friday collections, dedicated to the Holy Land. And I remember being very touched when I heard about the problems of the local Church, that there were not enough Christians there. So I told myself that I wanted to be one more Christian in the Holy Land.

The older Sr. Anastasie grew, the more this desire returned. When she became a nun, she knew that if a need was expressed for the Holy Land, she would volunteer. But she never expressed this vow to anyone... at least until 2006, when, during a spiritual retreat, she finally gave it to the Virgin Mary. "I couldn't stop thinking about it, so I gave it to the Virgin. A month and a half later, when I was supposed to leave to complete my formation in Italy, I was told that I would finally be doing it in the Holy Land." 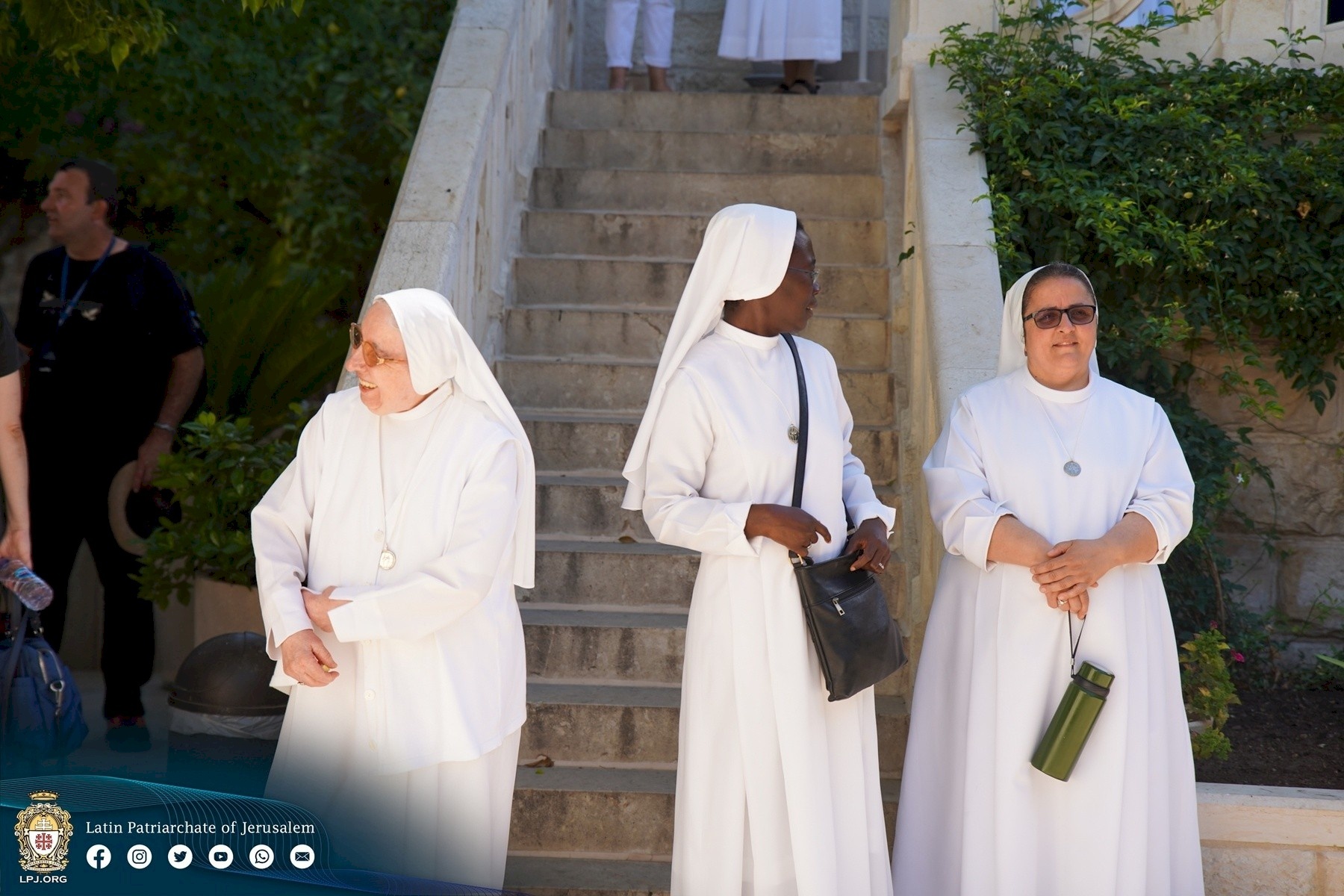 With her sisters, in front of the Franciscans’ Cenacolino, on the occasion of the opening of the Chapter of the Congregation

It was thus in 2007 that Sr. Anastasie saw her desire become a reality. But once her formation was finished, she had to return to the Ivory Coast; so she told her superior about her experience and her attraction for the Holy Land, letting the latter know that she was available to return there one day, if the opportunity arose. A few years later, shortly after her final vows, Sr. Anastasie was sent back to the Holy Land, this time permanently.

"I first went to Bethlehem, then I spent a year in Jordan before being sent to Jerusalem and then to Akko, where we used to have a small community. Today I am back in Effeta, but I will soon return to Jerusalem, to our provincial house.

A teacher by training (kindergarten and primary school), Sr. Anastasie is, in addition to being the current leader of the Effeta community, the pastoral leader of the French-speaking African community in the Holy Land. "It was a Cameroonian priest who was previously in charge of this pastoral ministry. When I came back here in 2011, he invited me to attend Mass. That's how I got to know the community. I was appointed pastoral care manager in 2018, and since then I have been working with two student priests to organize the community's activities – which take place weekly in Jaffa (Tel Aviv)."