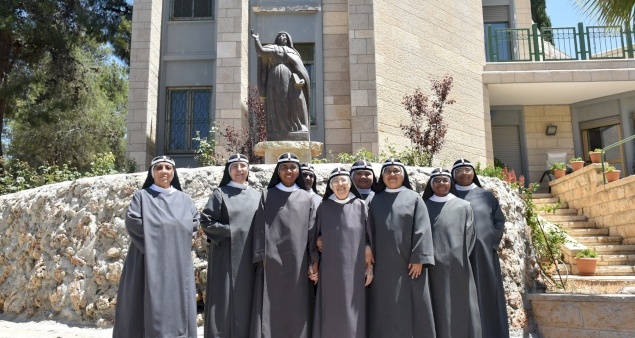 Portraits of Sisters in the Holy Land, chapter 3: the Bridgettine Sisters Available in the following languages:

HOLY LAND – They wear blue, brown or white… They work in offices, in schools, in institutions, in churches… They carry crosses around their neck, rings around their fingers, veils on their heads… They are the living stones of the Mother Church, the souls working discreetly to make the Church radiate. After meeting ten small female congregations in the Holy Land, lpj.org invites you today to visit the Bridgettine Sisters. 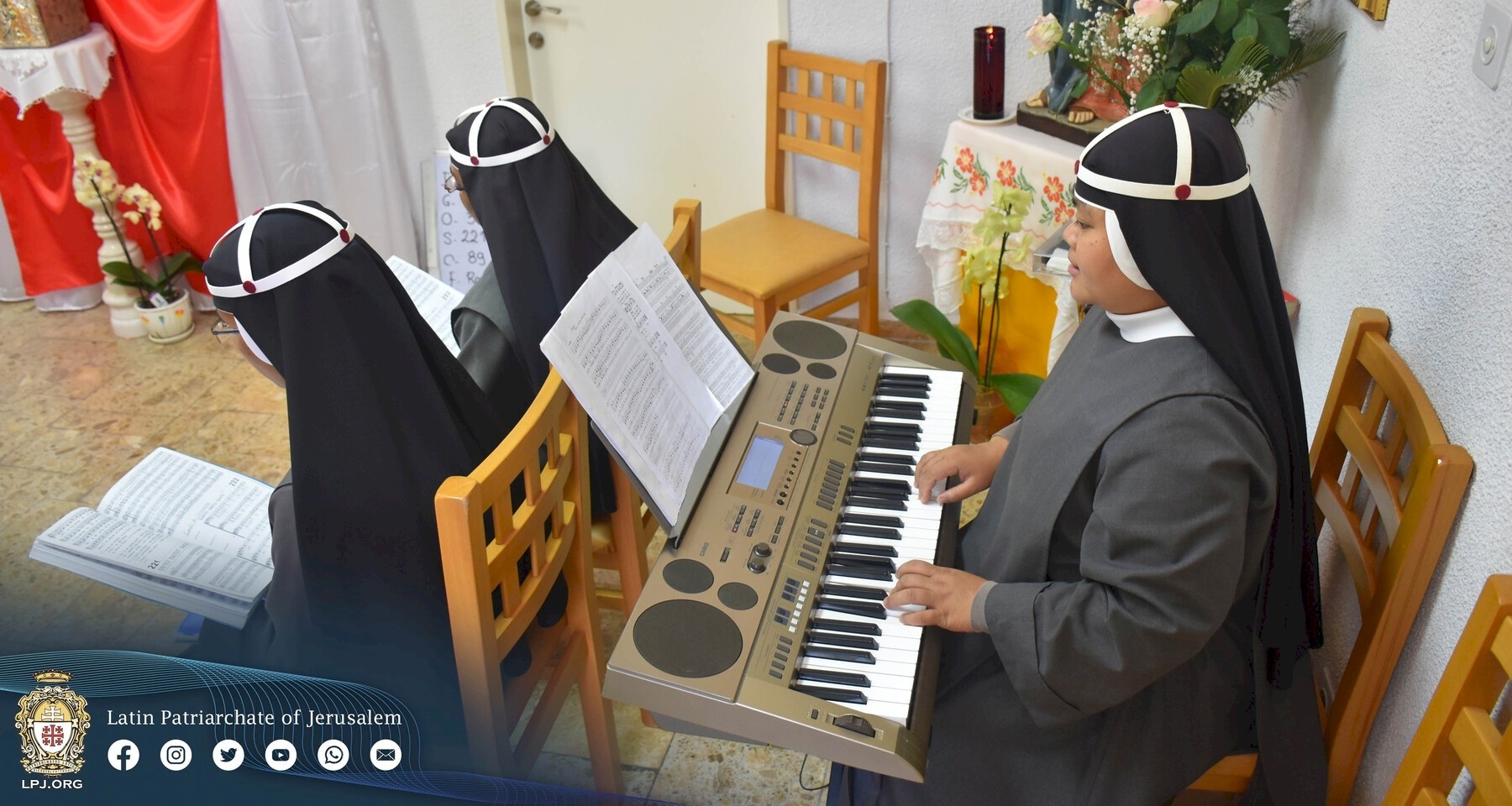 Inside the chapel of the Sisters’s monastery in Jerusalem, located close to Mount of Olives

The Order of the Most Holy Savior of Saint Bridget was founded in Sweden, in 1344, by a Swedish Saint called Birgitta. Born during the 14th century from a noble Christian family, she experienced mystical experiences at an early age, and had visions of Christ and of the Virgin Mary that encouraged her onto the path of religious life, with a specific devotion to the pain Jesus endured during his Passion. Today, the order has about 787 members dispersed all over the world, including a unique monastery of Bridgettine monks, founded in 1976 and located in Oregon. 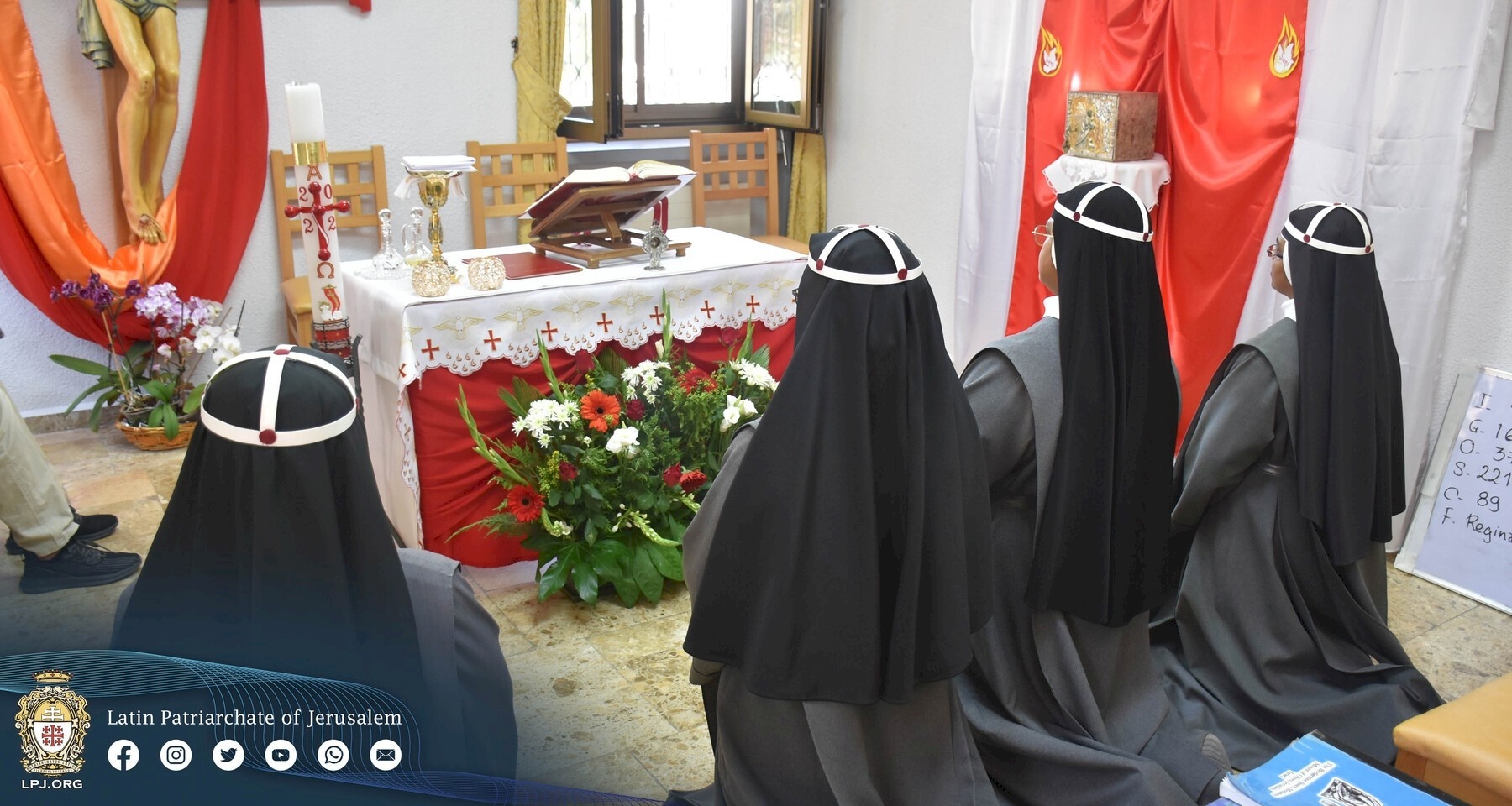 The devotion to Christ’s sufferings plays an important part in the Bridgettines’ spirituality, as shown by their motto: “Amor Meus Crucifixus Est” (“My Love is Crucified”).

Before the Order of the Bridgettines, there was Saint Bridget. Married at fourteen despite her will to devote her life to God, she gave her husband, a Swedish knight and councilor, eight children, six of whom survived infancy, and one of whom, a daughter, became known as St. Catherine of Sweden. Selfless, devoted to prayer and charity, St Bridget spent a lot of time caring for the poor and reading the Bible with the staff of the house.

After the death of her husband in 1344, St Bridget became a member of the Third Order of Saint Francis, choosing to dedicate her life to the poor and the sick. Shortly thereafter, she had a vision of Christ telling her to found a religious order and to name it the “Order of the Most Holy Savior”, and to dedicate it to His mother, the Virgin Mary. Thus were born the Bridgettines.

Saint Bridget died in 1373 in Rome, after a pilgrimage to the Holy Land during which she went to Jerusalem and Bethlehem. She was buried in the Bridgettine monastery of Vedstena by her daughter St Catherine, and canonized by Pope Boniface IX in 1391.

Following Luther’s reform in 1517, however, as well as the other political disruptions of the time, almost all the monasteries of the Bridgettines disappeared. By the beginning of the 20th century, only four remained, with only sisters.

It was a former Protestant, born in 1870 and converted to Catholicism in 1902, who gave new life to the order; her name was Maria Elizabeth Hesselblad, and she was canonized by Pope Francis in 2016. Despite her fragile health, she decided to revive St. Bridget’s work, while breathing new life into it by putting at the heart of its charism the prayer for the unity of the Church, back then divided by the reforms. Faithful the first foundress, St. Maria Elizabeth also gave the order a spirit of humility and simplicity, concretized in the hospitality that characterized St. Bridget, and that today characterizes all the Bridgettines – alongside other values of religious life, such as listening, contemplation and Eucharistic adoration, internalization of the Word of God, solemn celebration of the Liturgy of the Hours, and apostolic activities. 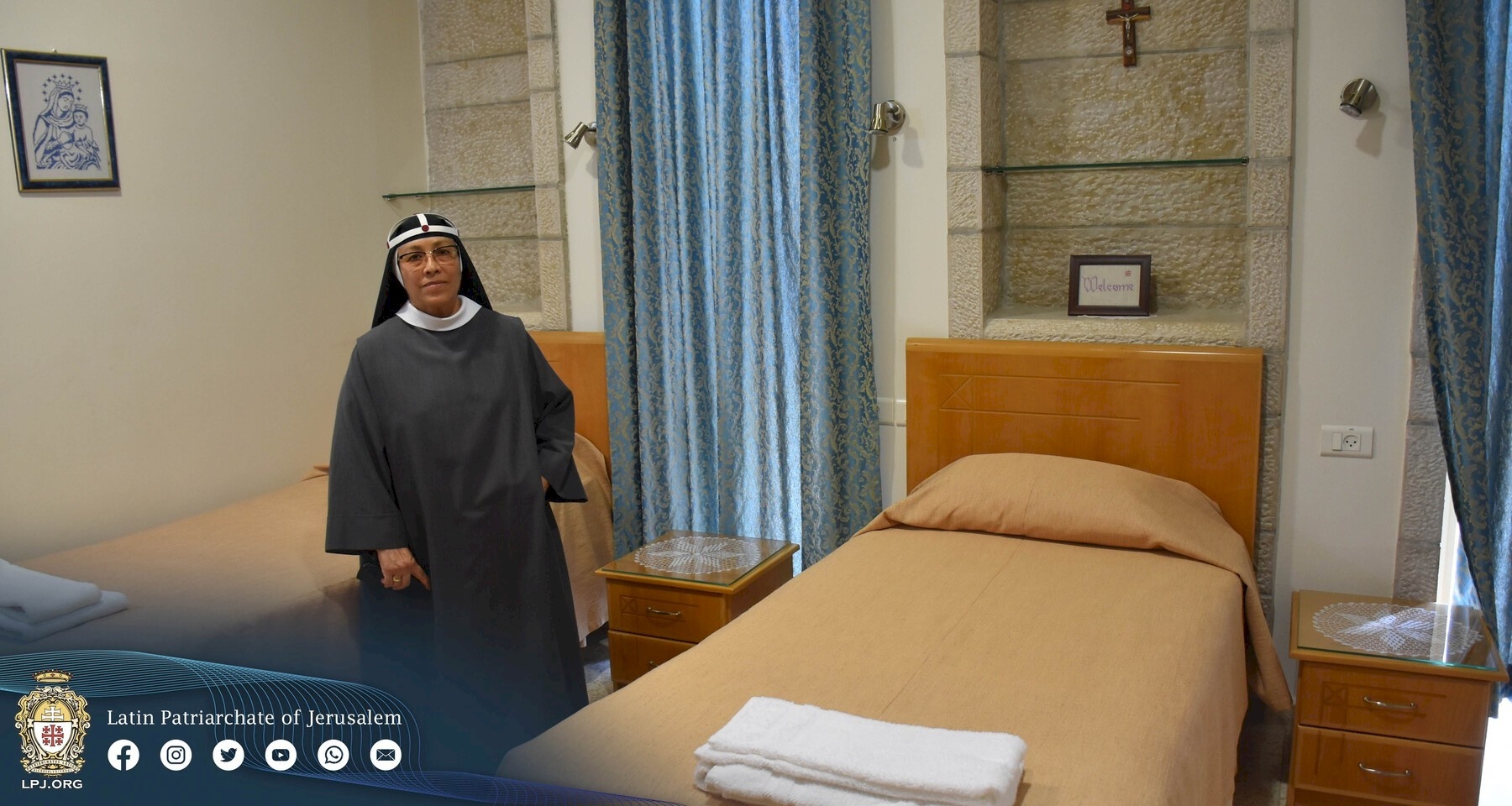 Sr. Maria Guadalupe d’Avila Ramos, superior of the monastery in Jerusalem, in one of the rooms of their guest house, symbol of the hospitality advocated by St. Bridget and St. Maria Elizabeth

“Our everyday tasks include praying, studying, working, welcoming guests… We try to adapt according to the various needs and situations,” says Sr. Maria Guadalupe, who joined the Order in 1982, in Mexico City. “By living intensely this work and the values it represents, my aspirations are fulfilled.”

When asked about her homeland, Sr. Maria’s answer is immediate. “If I was able to leave my country, it’s only thanks to my Lord Jesus Christ. With Him you can do everything, even leaving your homeland and family to form your own, because He fills everything and more."

The Rule of St. Bridget

When she founded her order, St. Bridget wrote a very precise rule that enacted how Bridgettines should live. “The number of choir nuns shall not exceed sixty, with four lay sisters; the priests shall be thirteen, according to the number of the thirteen apostles, of whom Paul the thirteenth was not the least in toil; then there must be four deacons, who also may be priests if they will, and they are the figure of the four principal Doctors: Ambrose, Augustine, Gregory and Jerome, then eight lay brothers, who with their labors shall minister necessaries to the clerics, therefore counting three-score sisters, thirteen priests, four deacons, and the eight servitors, the number of persons will be the same as the thirteen Apostles and the seventy two-disciples."

The Rule of St. Bridget also stated that monks were to be twenty-five to profess their final vows, and nuns eighteen years old – as the original order could be joined by both men and woman, although nuns were enclosed while monks could preach and become missionaries. All Bridgettines were also to respect the counsel of holy poverty, and own nothing but books; all that was not strictly necessary were to be offered to the poor. 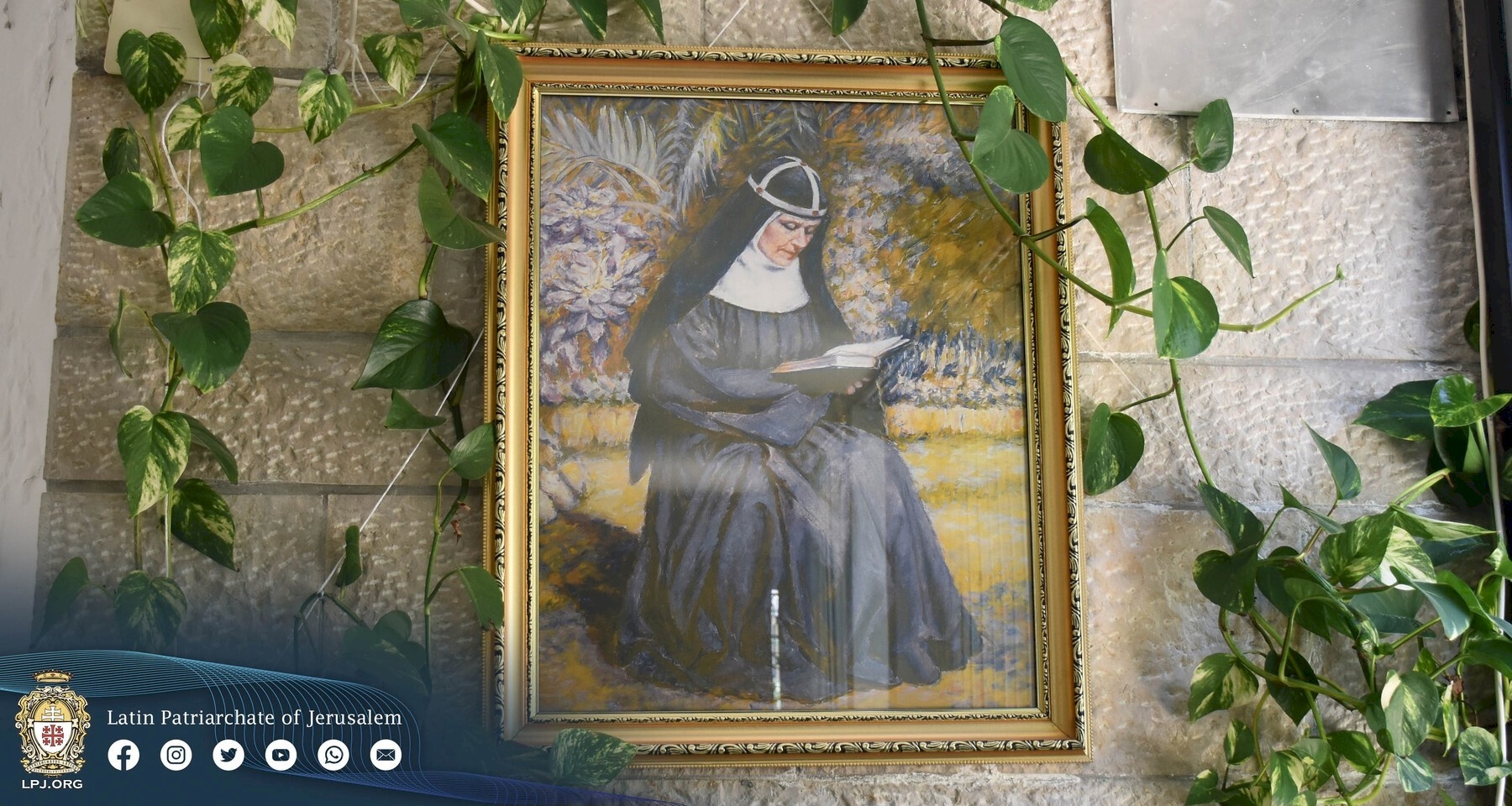 Although it was St. Bridget who founded the order, today, both her and St. Maria Elizabeth are considered to be the hearts of the congregation.

Over the centuries, the Order of the Most Holy Savior has divided into several different branches. One, which continues to strictly follow the Rule of St Bridget, consists of two monasteries located in Sweden and the Netherland. Another, founded by a Spanish nun, follows a modified version of the Rule and currently has four monasteries, located in Spain, Venezuela and Mexico. As for the third one, probably the most well-known, it is based on the teachings of both St. Bridget and St. Maria Elizabeth, and currently consists of more than fifty monasteries located worldwide. 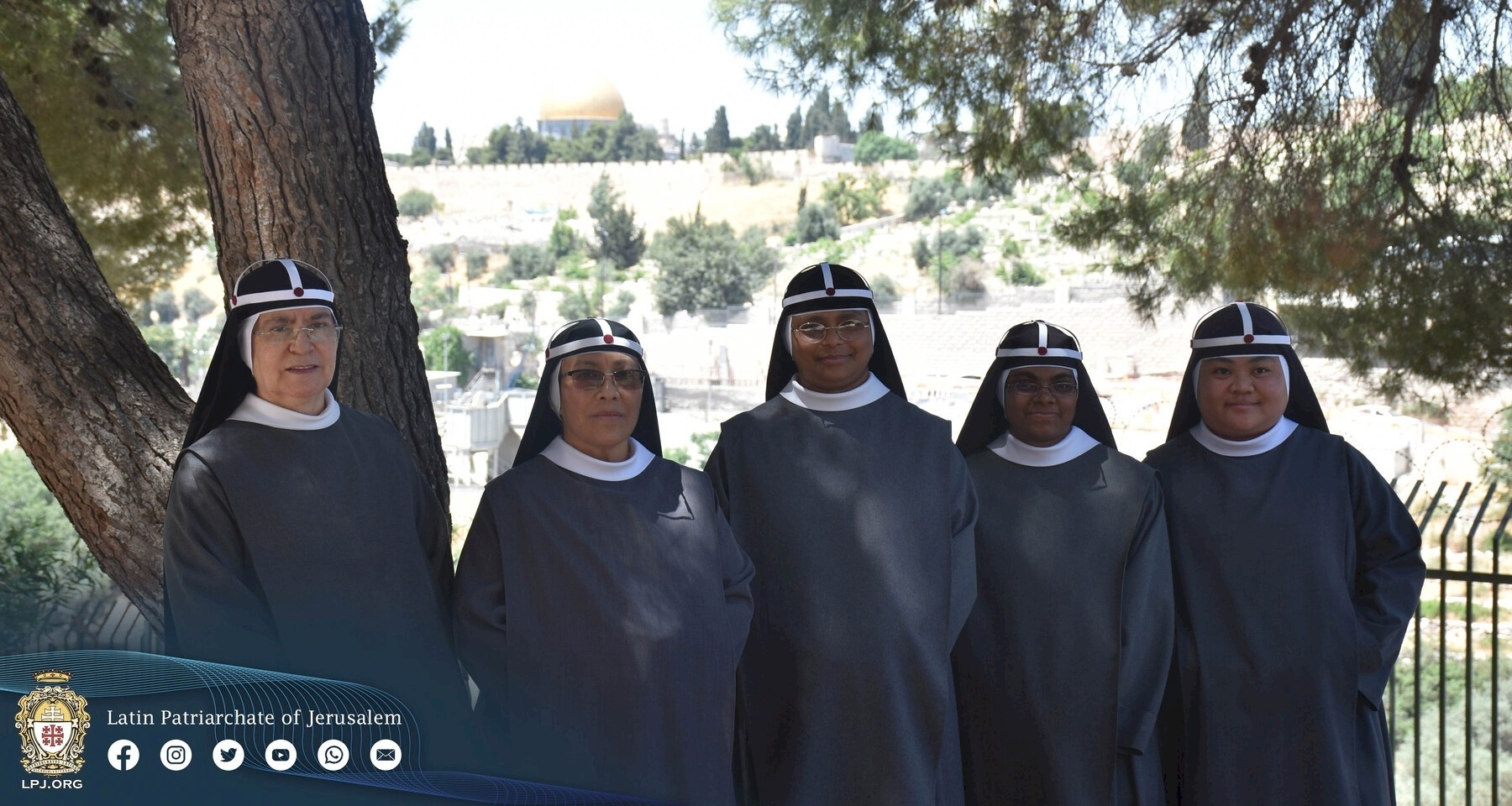 In the Holy Land, the Bridgettines live according to the charisms of both St. Bridget and St. Maria Elizabeth.

“Before the Holy Land, I was in charge of a community in Finland, then in Norway, and then in Cuba, where we founded a community in Habana and Pinar del Río,” explains Sr. Maria Guadalupe. “In all of these places, we as members of the Bridgettines tried to give the best of ourselves, in humility and service to the other, in complete surrender to the will of God. If I am here today, it is not because of my own merits, but because of the merits of Jesus Christ.”

The Bridgettines in Bethlehem and Jerusalem

In the Holy Land, one can find two guest houses run by Bridgettine sisters; one in Jerusalem and one in Bethlehem. In Bethlehem, the mother superior of the house, Sr. Serena, has been running the place for five years. “This house has been given to us by an Irish association, and we’ve established ourselves here in 2002. Every day, we welcome people in our house, but we also pray for peace and unity all over the world, and especially in the Middle East.”

In Jerusalem, the property run by the Sisters, located at the foot of Mount Olives, includes not only a guest house, but also a monastery, a conference center and a meeting hall. The mother superior, Sr. Maria Guadalupe, made her final vows in 1988, after a formation in Switzerland, Sweden and Finland. “I really fell in love with the Bridgettines, with their charism, their apostolate, their concrete way to live and experience the Lord’s mercy. So I followed them – and Christ – without thinking twice.”

Despite the difficulties related to the political context of the country, Sr. Maria Guadalupe shows, regarding the future, confidence and hopefulness. “I pray that, day by day, we live in enthusiasm and joy, despite our different backgrounds and nationalities, with one purpose in mind; to let God act in us. I hope that we live God’s Word passionately, in all our core, to be able to witness it to the others. And I pray that we do everything in our power to act for the good of our universal Church, of this society of ours, and of this Holy Land that I welcome and embrace with God’s love.” 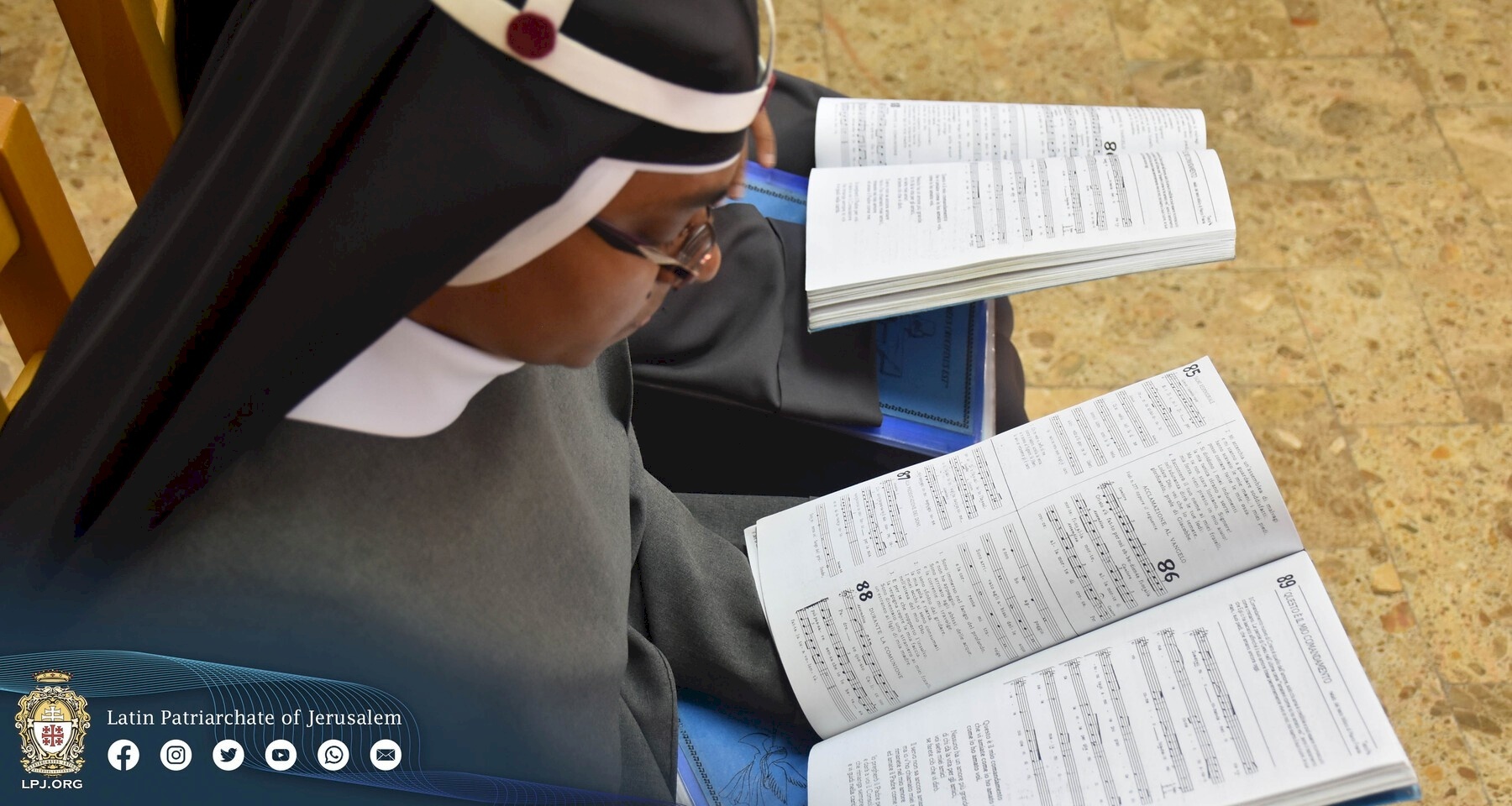 Every day, the Bridgettines pray for unity among the Church, but also for peace in the world.

Next chapter: the Disciples of the Divine Master