Portraits of Sisters in the Holy Land, chapter 4: the Pious Disciples of the Divine Master 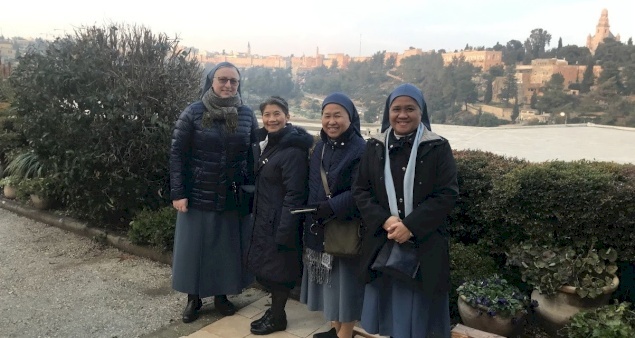 Portraits of Sisters in the Holy Land, chapter 4: the Pious Disciples of the Divine Master Available in the following languages:

HOLY LAND – They wear blue, brown or white… They work in offices, in schools, in institutions, in churches… They carry crosses around their neck, rings around their fingers, veils on their heads… They are the living stones of the Mother Church, the souls working discreetly to make the Church radiate. After meeting ten small female congregations in the Holy Land, lpj.org invites you today to visit the Pious Disciples of the Divine Master. 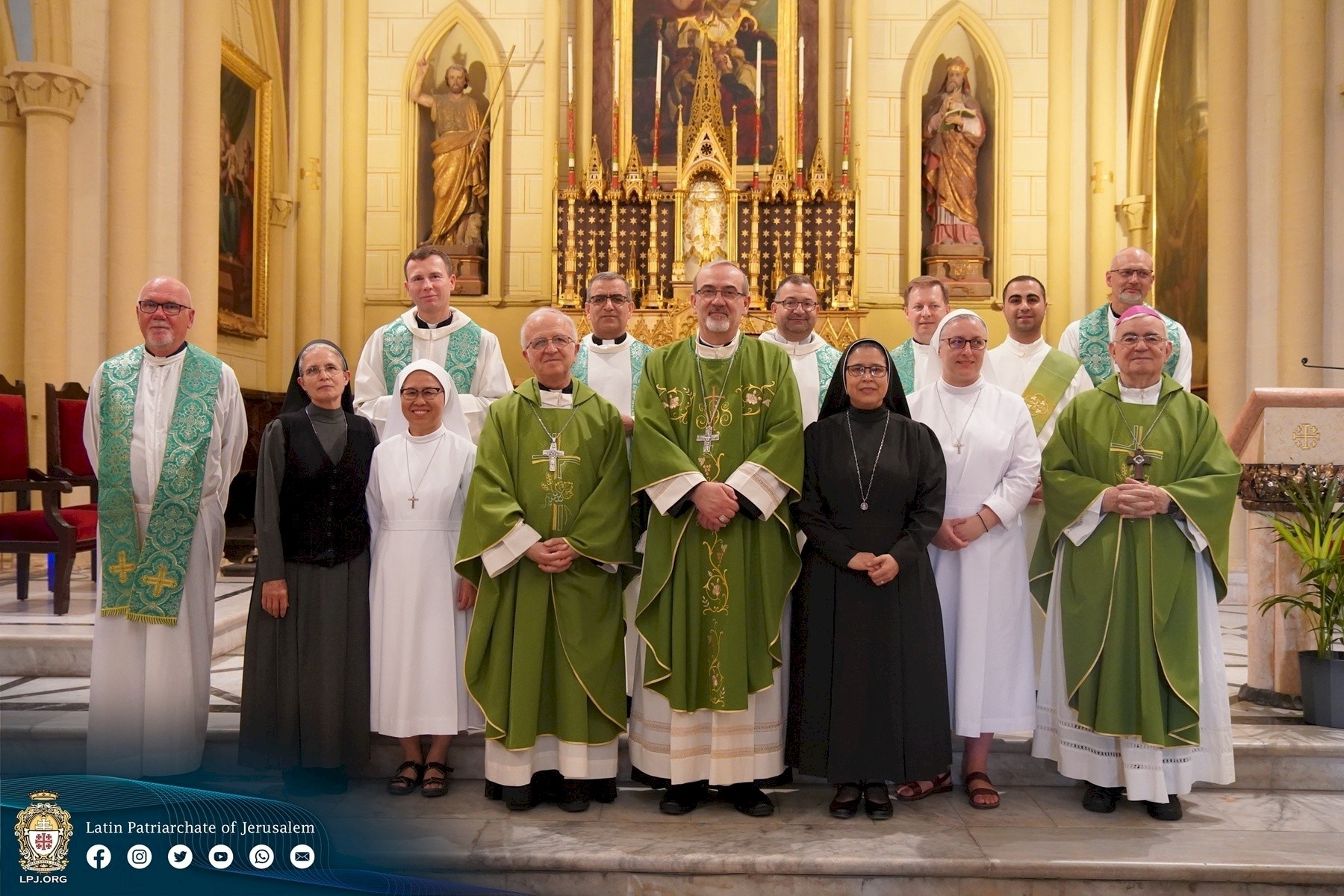 The Sisters of the Divine Master (wearing white) standing with priests of the Patriarchate and Mexican sisters alongside His Beatitude Pierbattista Pizzaballa, Latin Patriarch of Jerusalem, Mgr Shomali, General Vicar, and Mgr Marcuzzo, bishop emeritus, in the Pro-Cathedral.

The Disciples of the Divine Master is a congregation of sisters that was born in Italy in 1924. Although its mother house is located in Rome, it is now implemented in more than twenty-five different countries. Its members are especially dedicated to Eucharistic adoration, service to the priests, and liturgy.

Founded by Blessed James Alberione (1884-1971), the congregation of the Disciples of the Divine Master is part of what is today known as the Pauline Family. Made of ten different religious institutions, all founded by Fr. Alberione, this family notably includes the Society of Saint Paul, the Daughters of Saint Paul, the Sisters of Jesus the Good Shepherd and the Sisters of Mary Queen of Apostles, as well as other various institutions made of consecrated and lay people.

Originally, the objective of the Pauline Family was to evangelize and promote the Catholic faith through modern media. Such is still the charism of the Society and Daughters of Saint Paul today, as well as a couple of other members of the Pauline Family. However, some of the congregations and institutions founded by Fr. Alberione were given other missions, such as religious education or praying for vocations. The Disciples of the Divine Master were themselves entrusted with three tasks: Eucharistic adoration, service to the priests, and liturgical preparation. 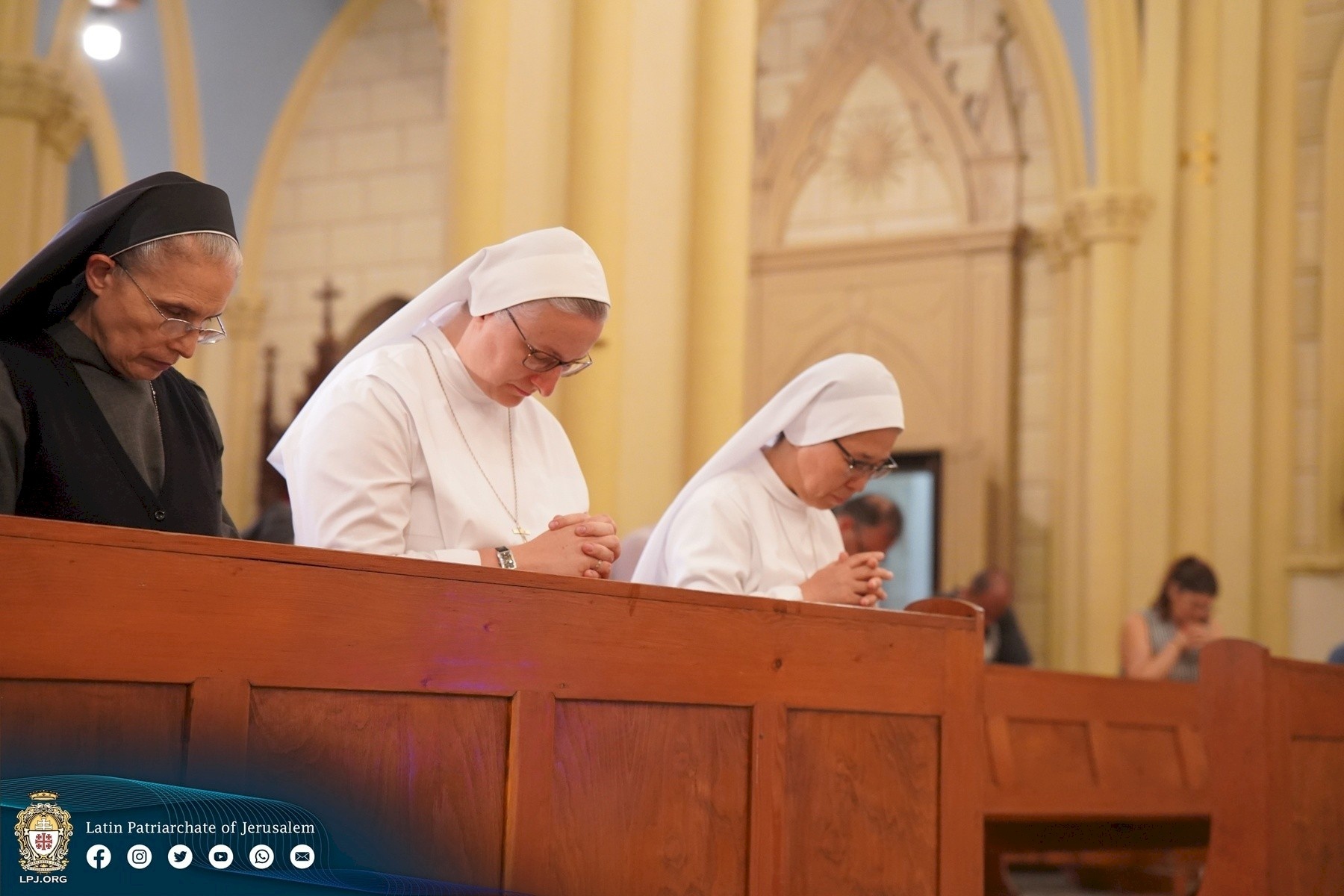 “After Fr. Alberione founded the Society and Daughters of Saint Paul, which, due to their charism, were very opened to the world, his spiritual director advised him to found another congregation of people, more contemplative, and willing to offer their life and prayer for these first two institutions,” explains Sr. Miriam, who joined the Disciples of the Divine Master when she was 19. “Fr. Alberione first thought about asking Dominican sisters, but, as their charism had nothing to do with those of the Society and Daughters of St. Paul, they declined. And so that’s how we came to be.”

As mentioned above, the Pauline Family also includes lay people, through the Association of Pauline Cooperators. Some of their members, closely associated to the Disciples of the Divine Master, actively participate, through prayers and intercessions, in the mission entrusted to the Sisters – that is, eucharistic prayer, service to the priests and liturgy.

“The first and foremost aspect of our mission is eucharistic prayer.” Sitting in a small room full of liturgical clothing inside the Latin Patriarchate of Jerusalem, where she has been working for two years, Sr. Miriam smiles. “Eucharistic presence is at the center of our lives. So we pray one hour and a half every day, for the priests, the Pauline Family… And we pray during the night as well, for reparation and forgiveness of the sins.”

Because without priests, people would not be able to experience this eucharistic presence, the Disciples’ mission also includes service to the priests. This service can take many different forms; praying for vocations, caring for sick or elderly priests, helping them for pastoral work… But also preparing the liturgy, which is the third aspect of the Disciples’ mission. “Some of our sisters are architects, they help designing churches – altars, sacristies, tabernacles… Others take care of the liturgical music, prepare the Masses and the liturgical clothing… Here, in the Latin Patriarchate, this is the mission of Sr. Concettina.” The Sisters of the Divine Master (wearing white) with the Patriarch and the bishops, priests and staff of the Patriarchate

As for Sr. Miriam, she oversees the good functioning of the house, working hand in hand with the maintenance and housekeeping teams to make sure everything runs smoothly.

At the heart of the Church of Jerusalem

“During my youth, I didn’t care much for studies and school,” she tells. “Then one day I went on a pilgrimage – every Christian student did, it’s a tradition in Poland – and this is where I briefly met the Disciples of the Divine Master. A couple of months later, one thought pops in my head: ‘I want to join them.’”

Dismissing the idea as a product of fatigue (“too much studying for my final exams”), Sr. Miriam waited a while before talking about it with her mother – as she knew nothing about the congregation, not even the nature of their mission. She eventually wrote them two letters: the first one left unanswered, the second one leading to an invitation to come spend some time with them. “Which I did. And that’s how I eventually ended up joining them.” Following her entry into religious life, and after two years of study in Italy and a short period in Ukraine, Sr. Miriam was sent to the Holy Land in 2009, where she worked in the library of the Custody until 2012. She then went back to Poland and became mother superior of her convent, treasurer, as well as a guide for pilgrims. She came back to the Holy Land in 2020, to work in the Latin Patriarchate of Jerusalem. “What I do here now, and what I’ve been doing since I became responsible, is supervise and organize all the maintenance and housekeeping, in the kitchen, the offices… as well as the events we host here, in the Patriarchate.”

For Sr. Miriam, working here after having worked in the Custody is a truly rich experience. “You can see the two sides of the same coin,” she explains. “With the Custody, you get to discover the history and work of the Franciscans, especially regarding the Holy Places, which they have been guarding for more than 800 years. Here, in the Patriarchate, you stand at the heart of the Church of Jerusalem, which is itself the very heart of the universal Church.” 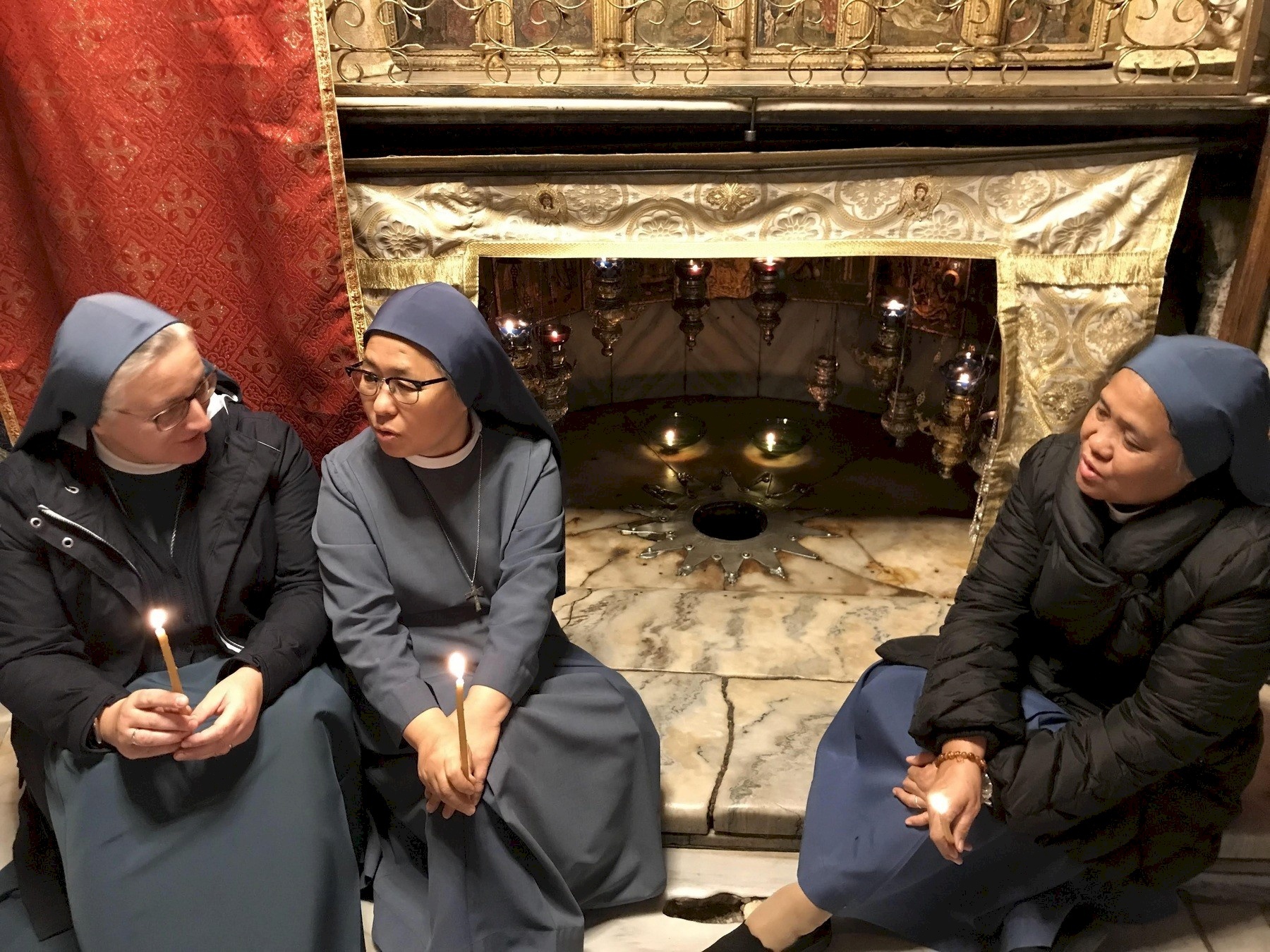 Inside the Grotto of the Nativity in Bethlehem

“I also found it to be rich because it’s concrete, it’s rooted in real life,” adds Sr. Concettina. Born in Korea and raised in a Christian family, she started to look for ways to serve the Church at a very early age. As her vocation grew, she began to visit different congregations; but it was only after three years of doing so that she joined the Disciples of the Divine Master, at twenty-three years old. She went to Rome to study, came back to Korea to teach liturgy, and was then sent to the Holy Land; first to work at the Custody, then at the Latin Patriarchate.

“Before coming here I studied a lot. Studying is good, but it’s theory. Here, because I oversee everything related to liturgy, I get to meet a lot of people, especially after Masses and celebrations. So, my life here is practice, and every aspect of it is full of life.” 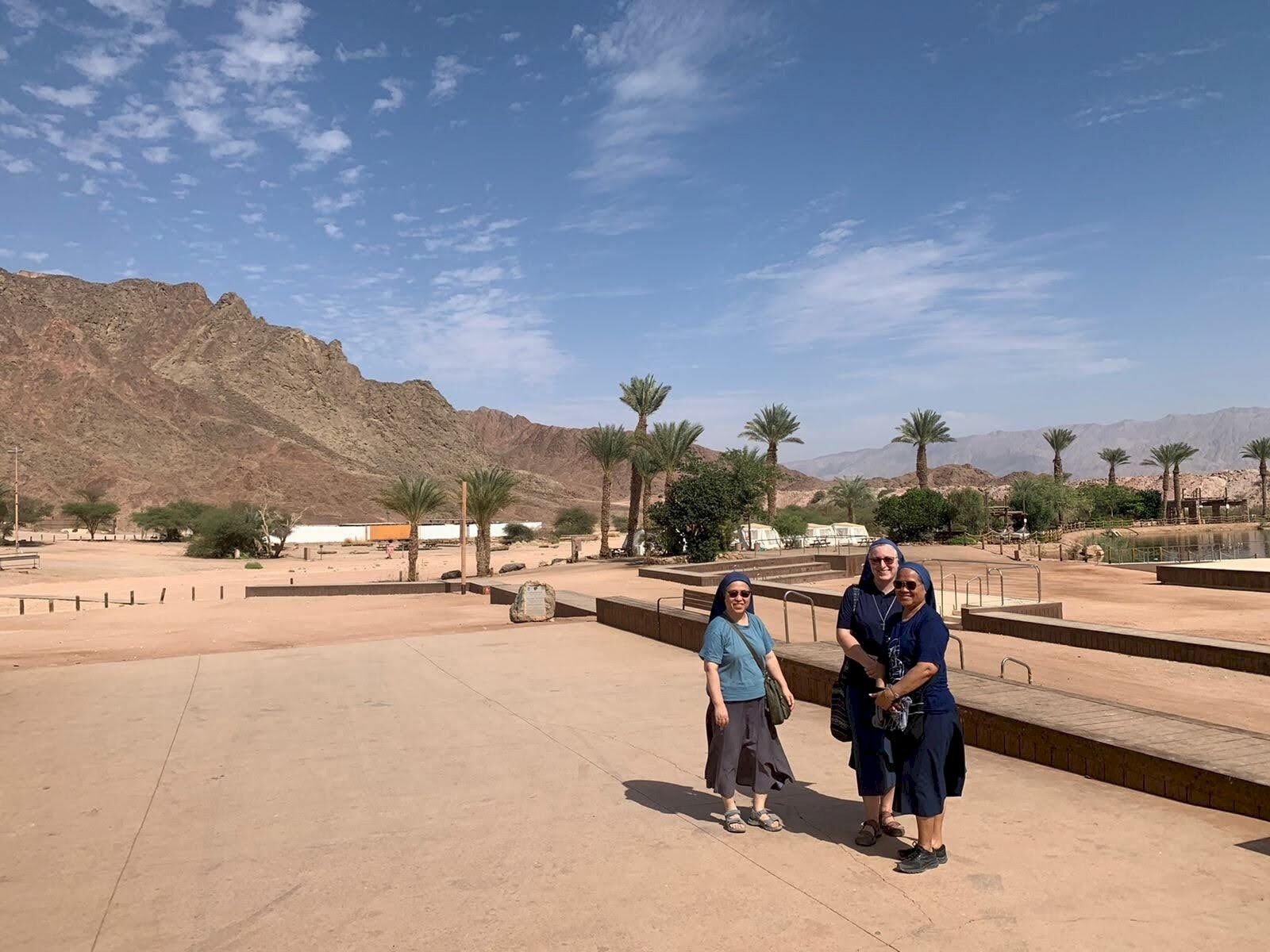 Next chapter: the Oblates of the Assumption