Portraits of Sisters in the Holy Land, chapter 6: the Benedictines of Our Lady of Cavalry 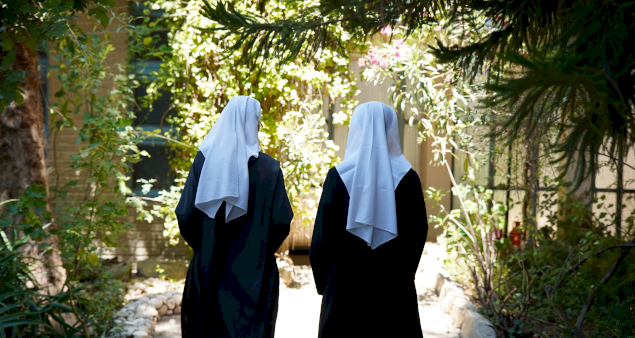 Portraits of Sisters in the Holy Land, chapter 6: the Benedictines of Our Lady of Cavalry Available in the following languages:

HOLY LAND – They wear blue, brown or white… They work in offices, in schools, in institutions, in churches… They carry crosses around their neck, rings around their fingers, veils on their heads… They are the living stones of the Mother Church, the souls working discreetly to make the Church radiate. After meeting ten small female congregations in the Holy Land, lpj.org invites you today to visit the Benedictines of Our Lady of Cavalry. 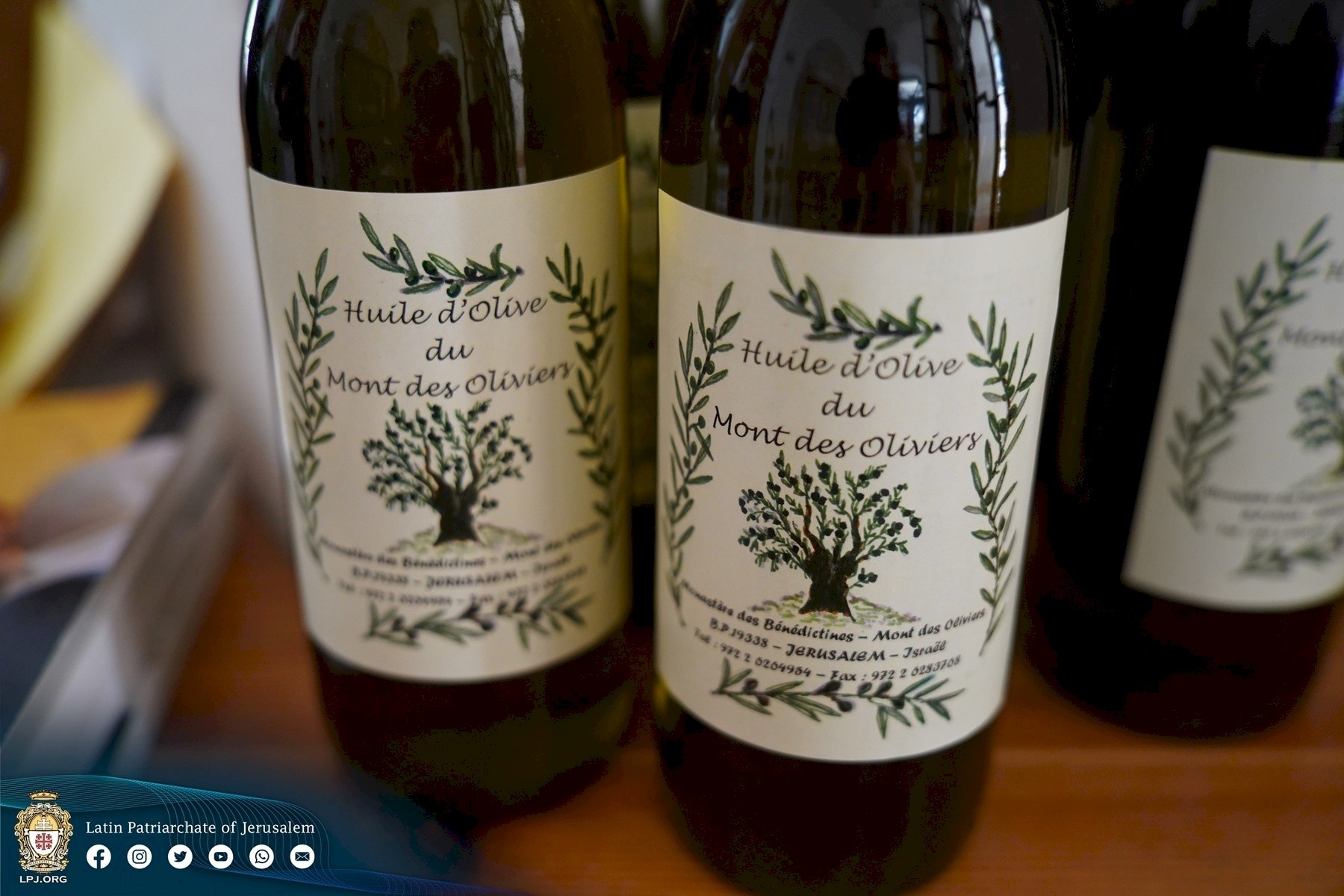 Living at the top of the Mount of Olives, the Benedictine nuns are famous for their icons and their oil... but also their jams, their soaps, their rosaries... Everything is local and home made.

Born in Poitiers in October 1617, the Benedictine Sisters of Our Lady of Calvary celebrated 400 years of existence in 2017. Today, they are scattered in Angers, Prailles, Bouzy-la-Forêt and Jerusalem, where they form "a praying presence in the Holy Places." Their monastery, which offers a magnificent view of the Esplanade of the Mosques, the Holy Sepulchre and the Calvary, is currently home to six sisters, including two from other branches of the Benedictine family, who have come to share the life of the congregation.

A French congregation... in the Holy Land

In 1599, after the death of her husband, Madame d'Orléans, the future founder of the congregation, joined the Feuillantines of Toulouse to lead a contemplative religious life. Six years later, she was entrusted with the reform of Fontevraud Abbey by the Pope, who appointed her Grand Vicar. It was from this reform that the congregation of the Benedictine nuns of Our Lady of Calvary was born, founded jointly by Madame d'Orléans (who became Mother Antoinette of Saint Scholastica) and Father Joseph of Paris, a Capuchin (Franciscan reform) who helped her in her mission.

In 300 years, the congregation underwent many changes and was scattered throughout France, mainly in the west. However, it was not until 1894 that it acquired a piece of land in the Holy Land, atop of the Mount of Olives, and then, two years later, permission to found a monastery – on condition that they also open an orphanage for young Greek-Melkite girls. Thus, an old dream came true: to live and pray in the land of Christ. 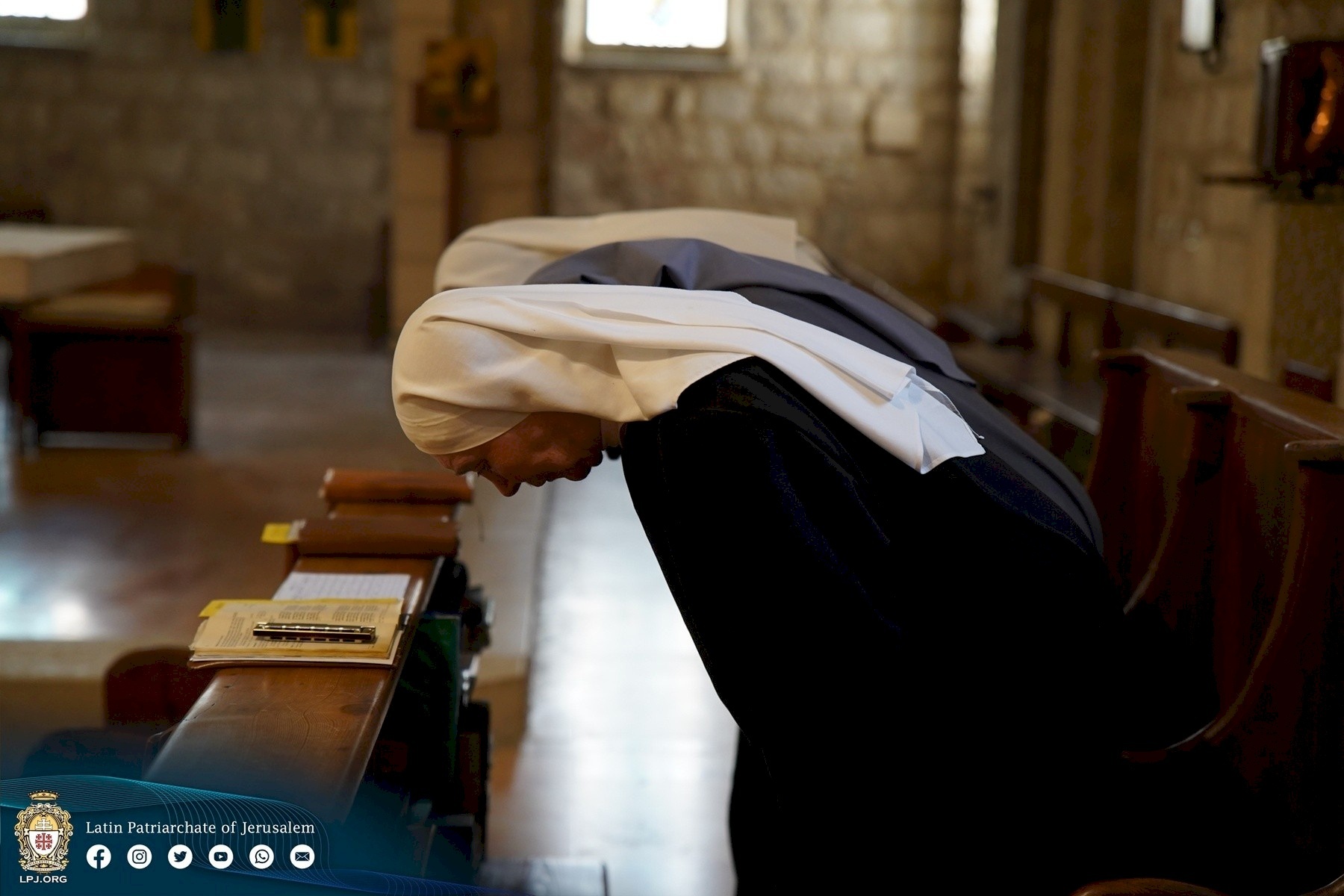 In the chapel of the Sisters, during the daily prayer (Sexte).

First steps and path to iconography

In spite of difficult beginnings, due in particular to the absence of a chaplain, to relations with the Latin Patriarchate and the Melkites, to the sudden death of the Prioress and the Subprioress in 1900, and to the First World War – during which the nuns were obliged to return to France – the community survived. Most of its members came from France, but some vocations were more local: Lebanon, Egypt, Palestine... In 1953, Sister Marie-Paul, born in Egypt but of Palestinian father and Italian mother, entered the monastery of the Mount of Olives. A few years later, she began to learn iconography with a Little Brother of Jesus, who offered to pay his room at the monastery with lessons. "Little by little, it became her true means of expression," explains Sr. Marie, the current prioress of the monastery. 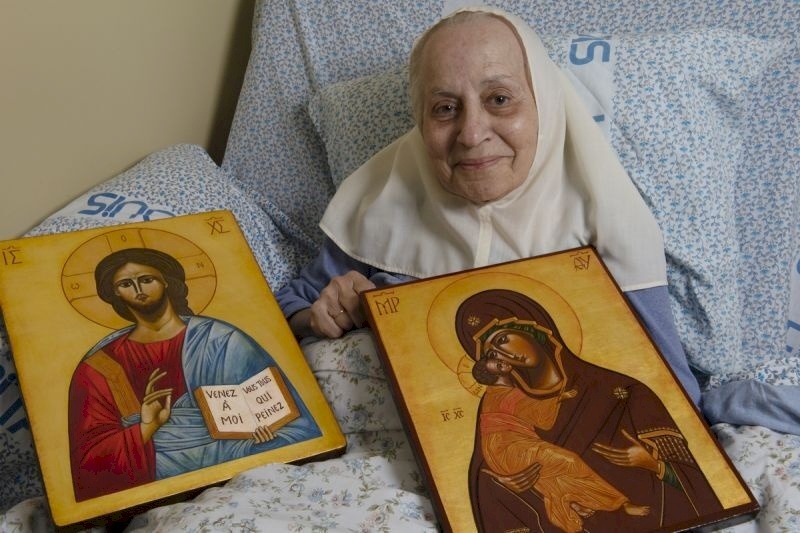 Sr. Marie-Paul and her icons. Famous for her art, she produced unique commissions, not only for the Holy Land but also for foreign countries. (Photo credit: www.benedictines-ndc.com)

After her death in 2019, it is Sr. Marie-Bénédicte, in the Holy Land for 20 years, who took over. She learned everything from Sr. Marie-Paul. "I fell in love with Jerusalem at first sight during a pilgrimage to the Holy Land, which I made just before becoming a nun. In the Benedictine world, we profess a vow of stability; when we enter a community, we usually stay there forever. But our monastery on the Mount of Olives is special; it relies mainly on French vocations, because local recruitment is complicated. So when my community in France, in Bouzy-la-Forêt, asked if any of us wanted to go to Jerusalem, I did not hesitate.” 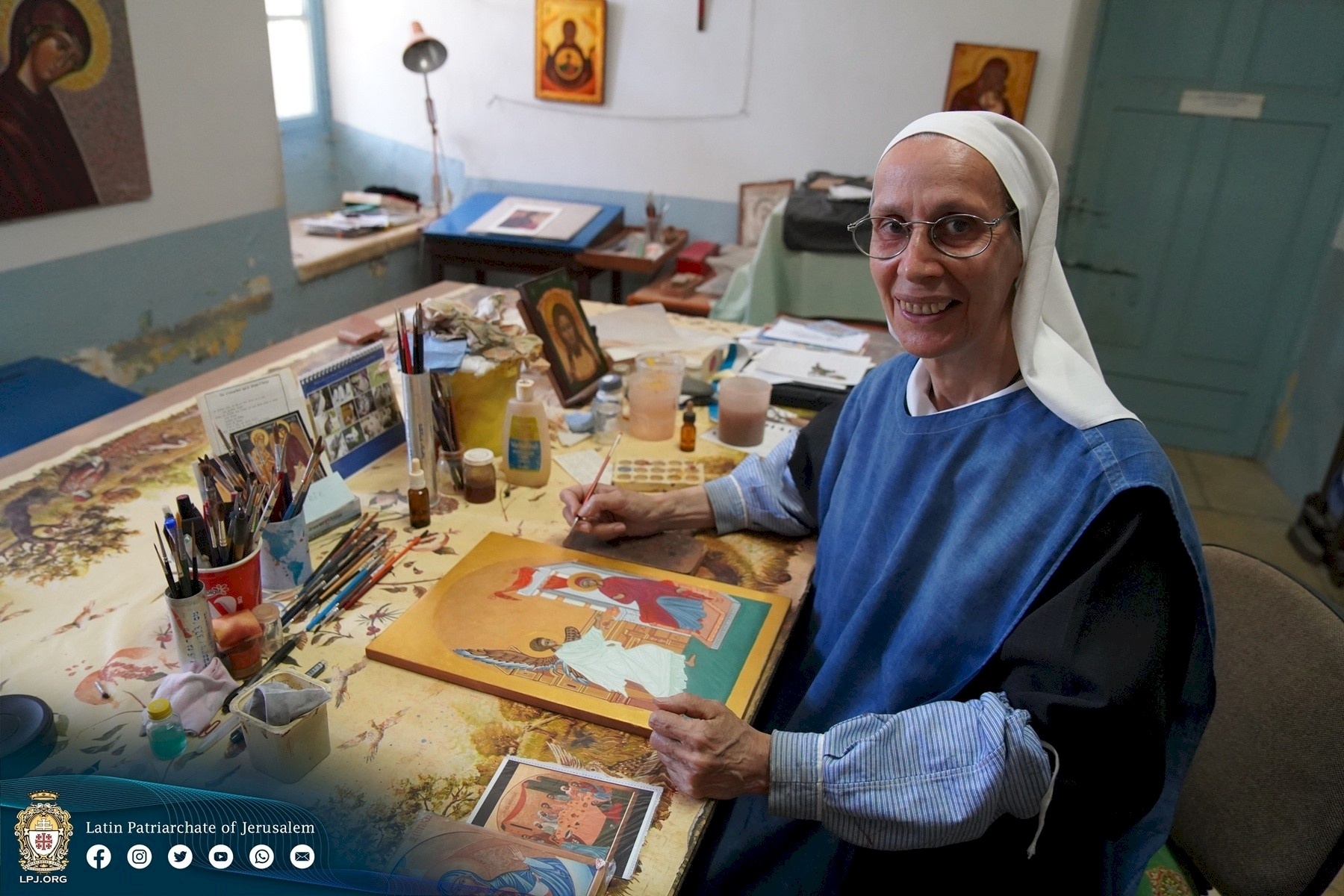 Sr. Marie-Bénédicte in her workshop

"To be a bridge and not a wall”

Today, the community, which has few members, is looking at the future. Associated with other French Benedictine communities, it is seeking to renew itself and has already come up with several initiatives: opening the garden to contemplation, working on communication, setting up a real spiritual project around the reception of pilgrims, proposing new products for the store... Sr. Marie-Reine, who arrived from Benin on March 17th, 2022, and is a member of another branch of the great Benedictine family of Subiaco, has already begun to work, by making bags of delicious, typically Beninese small cakes, soaps, and pretty embroidered bags decorated with an icon. 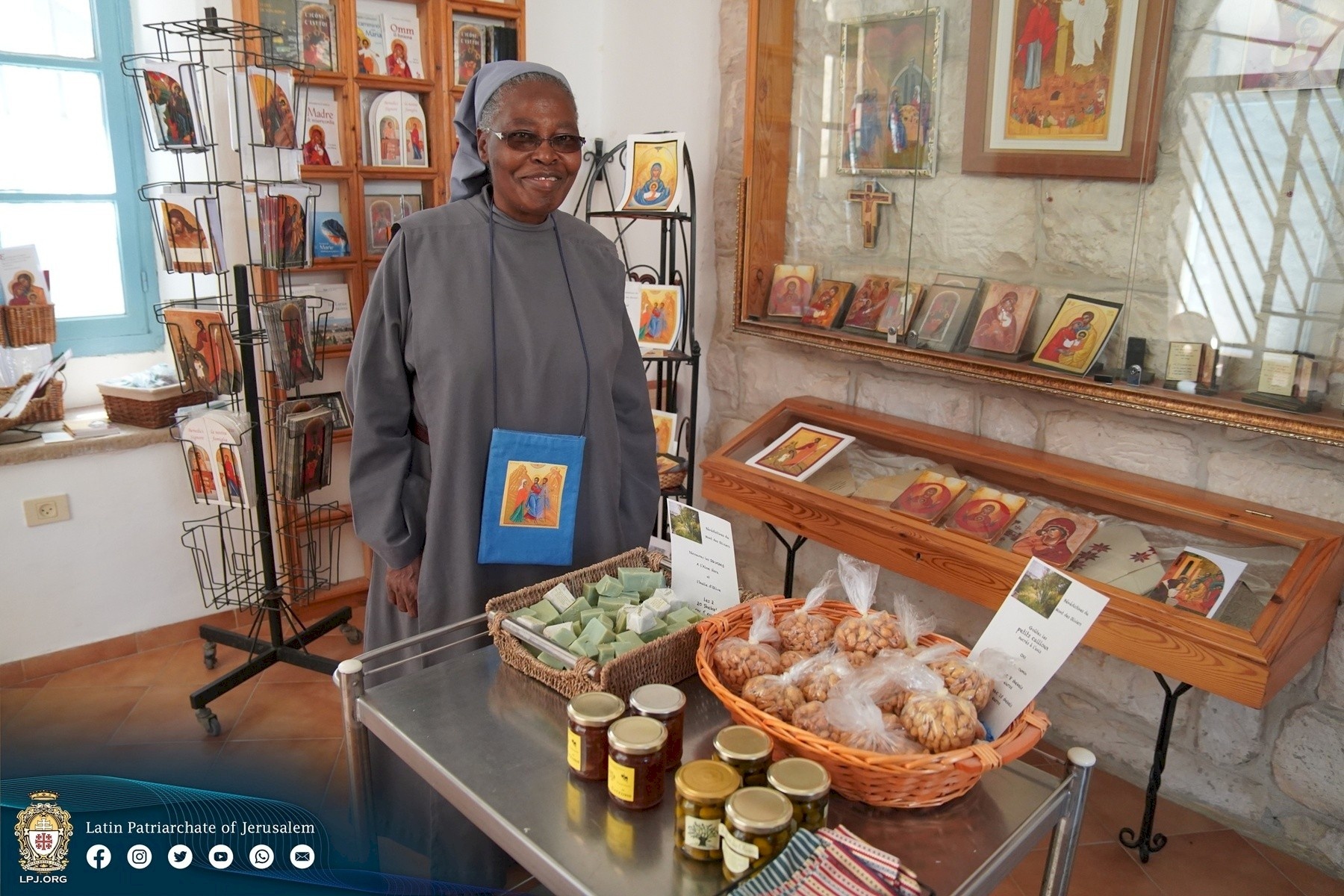 Sr. Marie-Reine with some of her creations: bag, cakes, soaps.

"Our community in the Holy Land has been transformed by two sisters: Sr. Marie-Paul, who left her mark on the art of iconography, and Sr. Paula, of Jewish origin, who converted to Christianity in 1943. Thanks to them, we have two roots; one Jewish, the other Arab," explains Sr. Marie. "Today, we ask ourselves how to preserve this heritage, as well as the place, so iconic, that we live in." 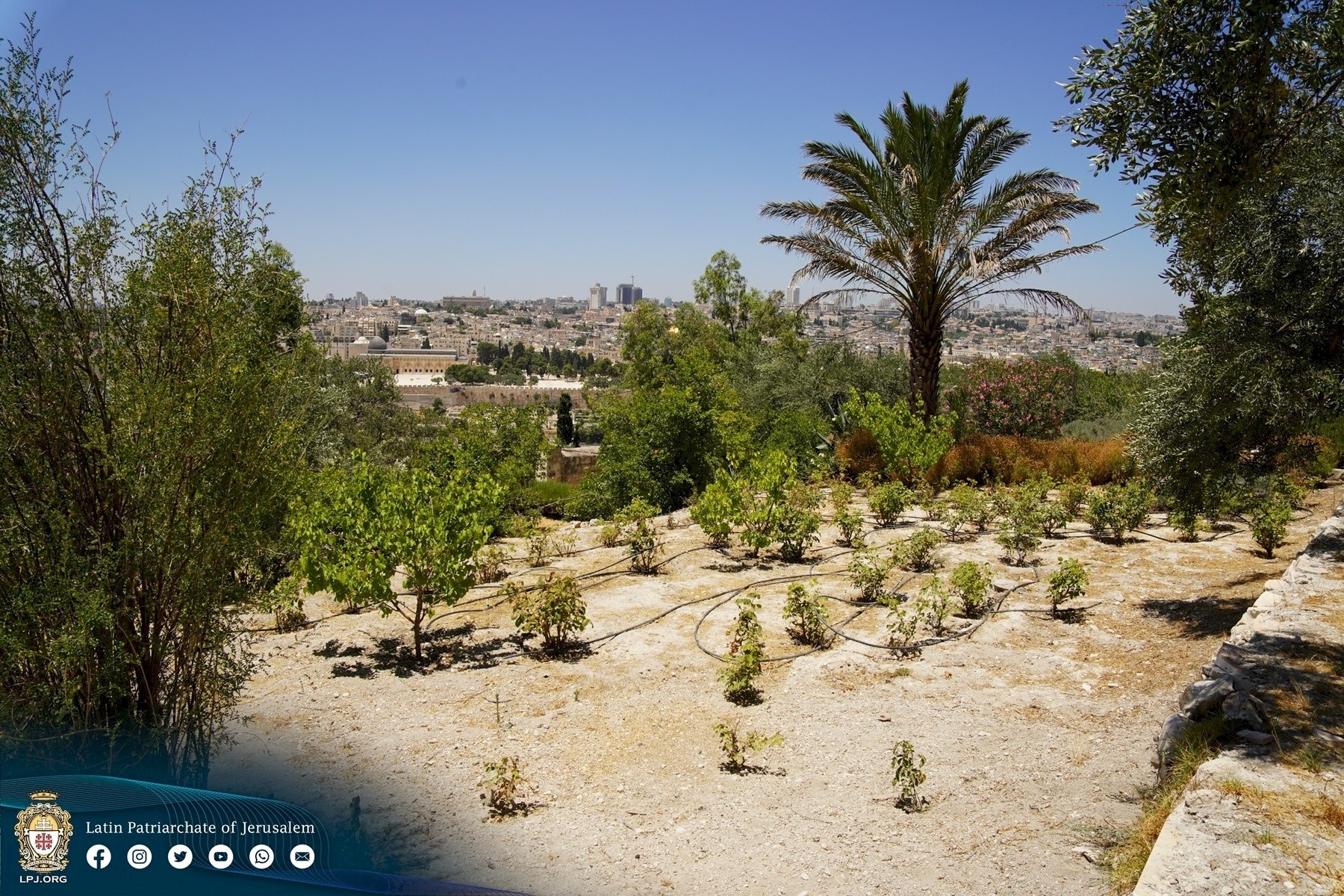 The garden of the monastery, from which one can see Al-Aqsa (left) and the Dome of the Rock (right)

Sr. Marie has been prioress of the Mount of Olives Monastery since 2019. But she got to know the community long before she became a nun, during a stay at the EBAF, while studying architecture. She took advantage of her time in Jerusalem to buy some icons from Sr. Marie-Paul; no one would have suspected that she would return years later... 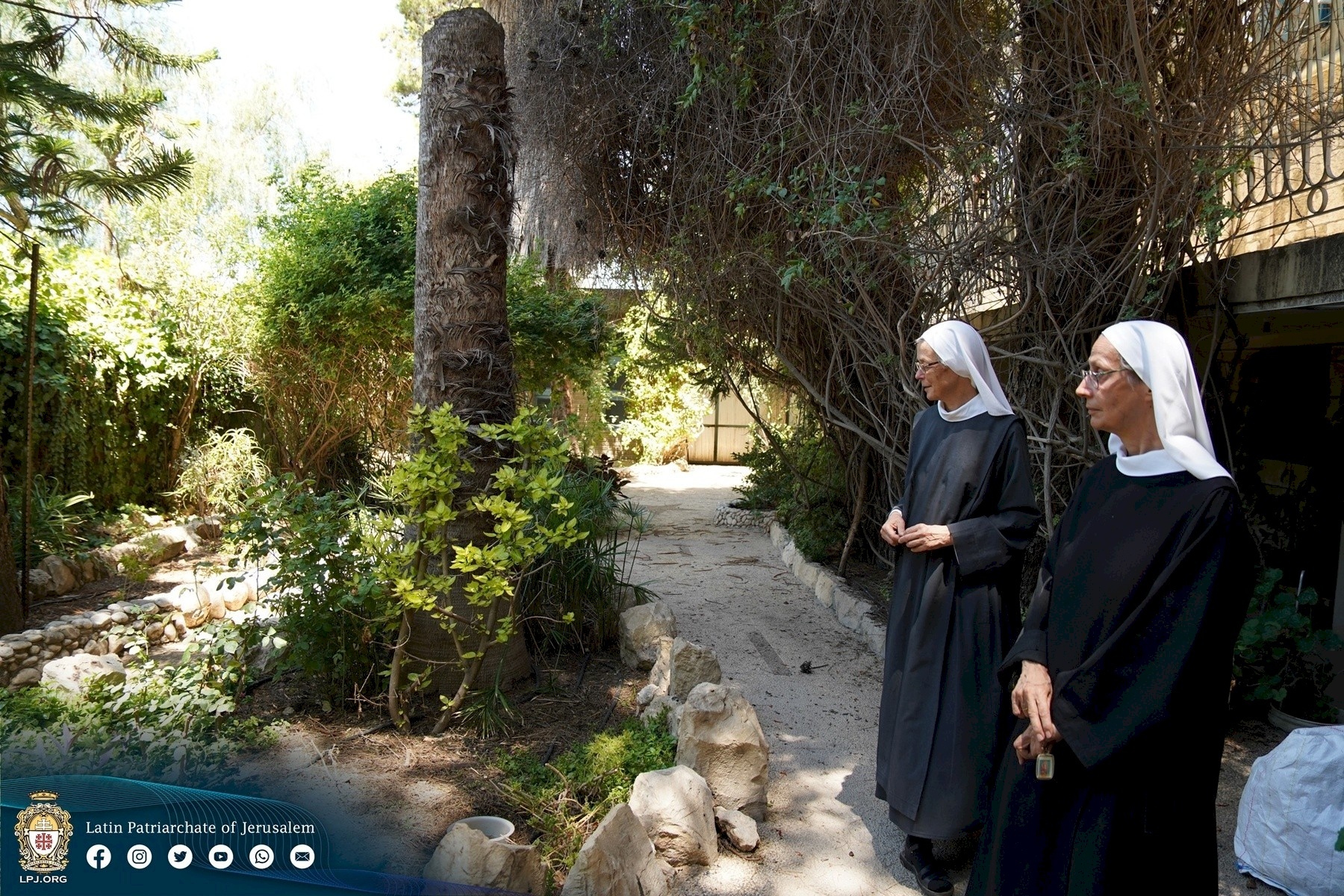 Living the mystery of Holy Saturday

Like all Benedictines, the Benedictine community of the Mount of Olives follows the Rule of Saint Benedict. Their charism is based on his spirit and the one of Mary through the Word of God, the celebration of the Eucharist, prayer and community life. However, the charism of the Benedictine Sisters of the Mount of Olives also takes on a dimension centered on a very particular time, Holy Saturday. "Holy Saturday – this time between the Friday evening of the crucifixion and the Easter morning of the resurrection – is essential. It is like the white space between words," explains Sr. Marie. "For a word to have meaning, there must be a pause, a blank, a space. If we try to fill everything, we end up suffocating."

Thus, the nuns live Holy Saturday as "a contemplative rest," which prepares them to receive the announcement of the resurrection. "For me, contemplation is something you receive and not something you do," says Sr. Marie. "It is a freeze frame that allow things to penetrate us. In the word ‘contemplation’, there is the notion of seeing; except that this is not an external, but an internal vision." 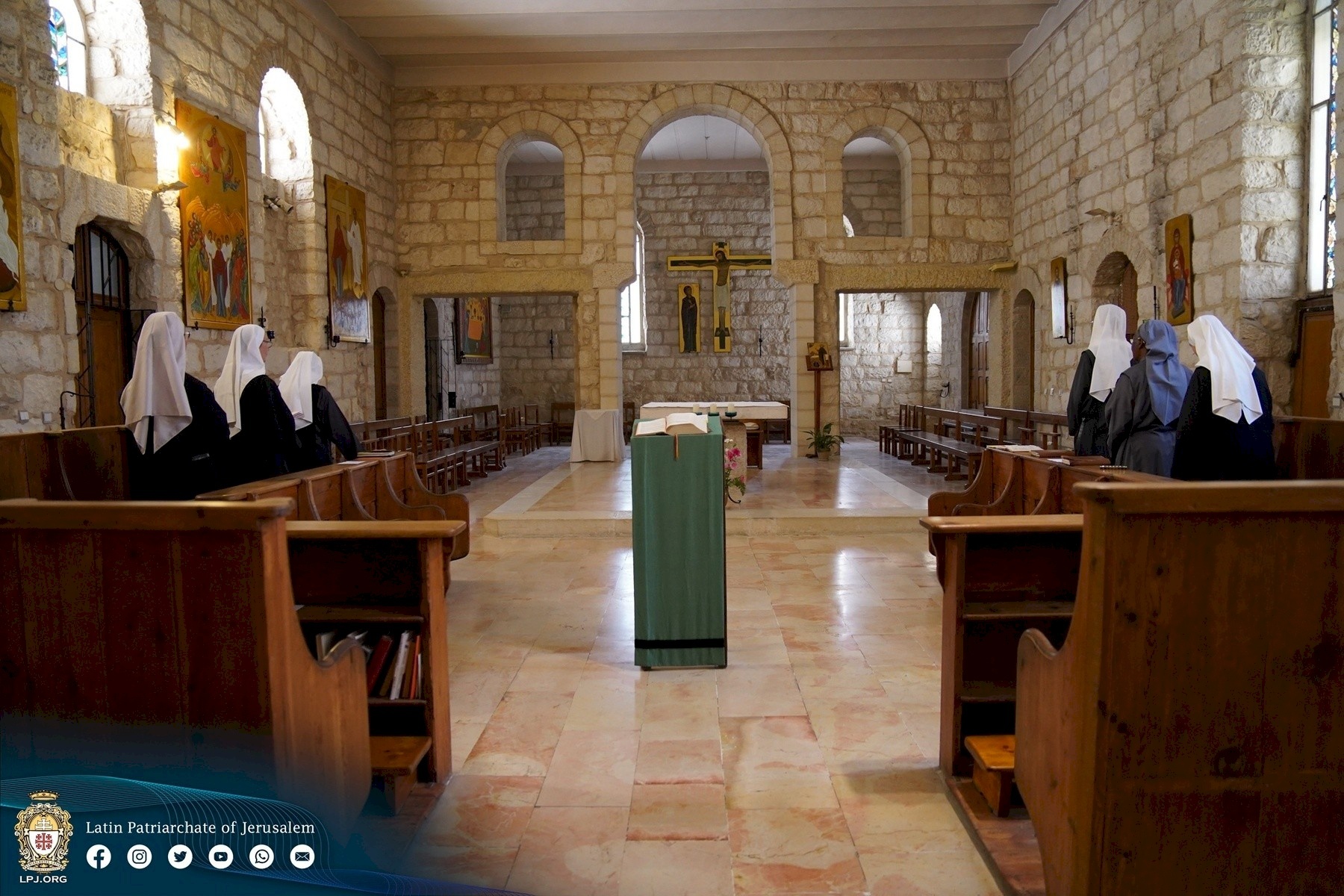 "To contemplate is to let God act”

Next chapter: the Sisters of Our Lady of Perpetual Help