Portraits of Sisters in the Holy Land, chapter 9: the Carmelites of Bethlehem 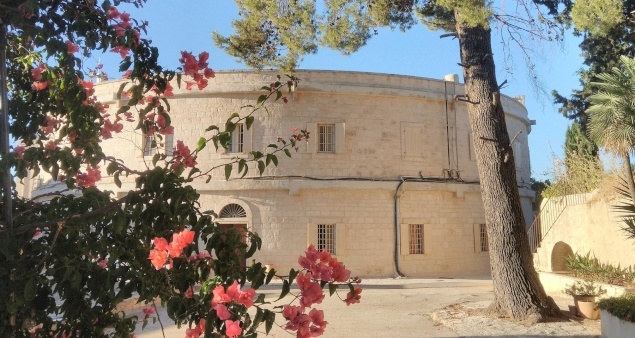 Portraits of Sisters in the Holy Land, chapter 9: the Carmelites of Bethlehem Available in the following languages:

HOLY LAND – They wear blue, brown or white… They work in offices, in schools, in institutions, in churches… They carry crosses around their neck, rings around their fingers, veils on their heads… They are the living stones of the Mother Church, the souls working discreetly to make the Church radiate. After meeting ten small female congregations in the Holy Land, lpj.org invites you today to visit the Carmelites of Bethlehem. 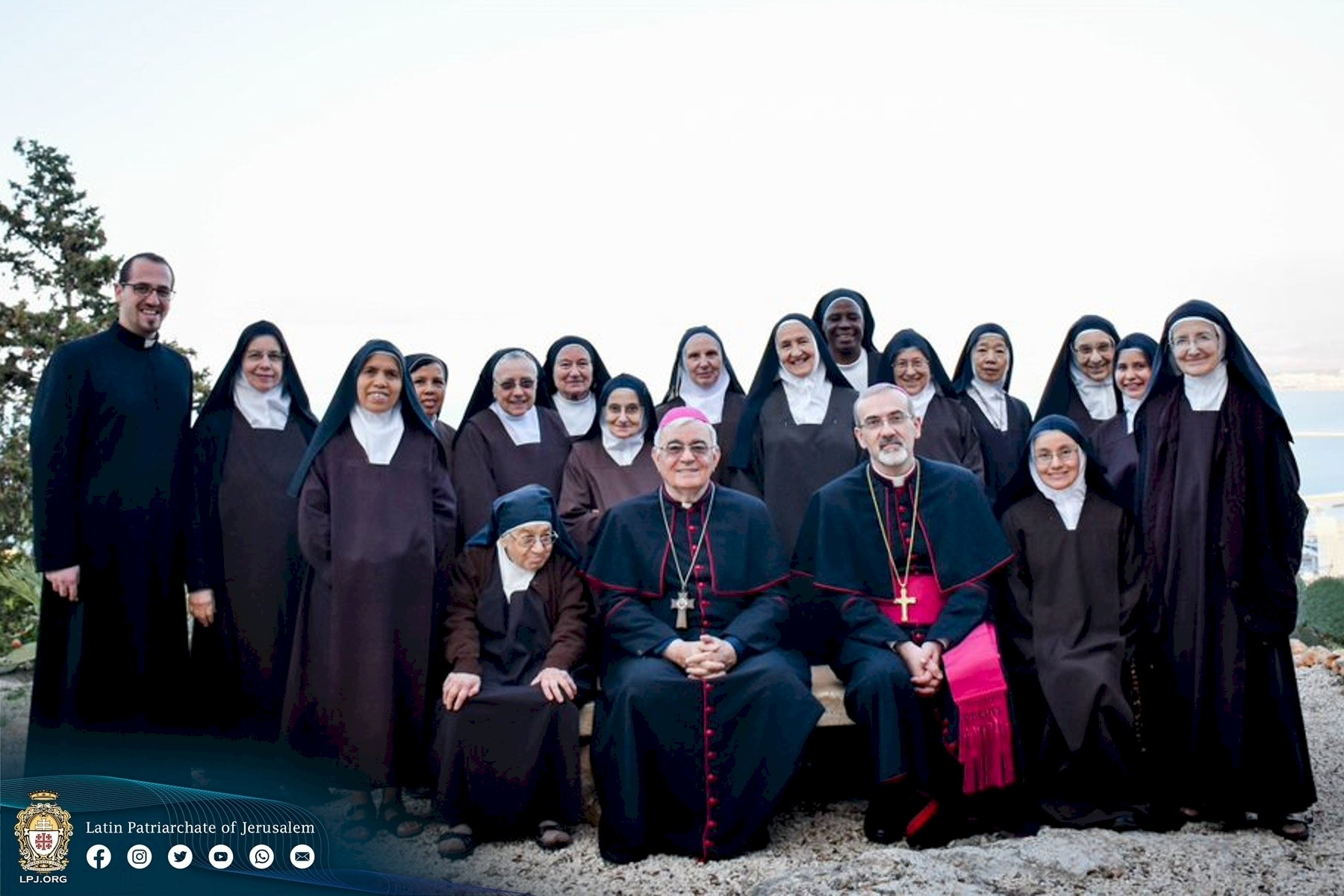 The Carmelites of Haifa with His Beatitude Pierbattista Pizzaballa, Latin Patriarch of Jerusalem, during the 125th anniversary of Carmel

Born on Mount Carmel, where the prophet Elijah performed many miracles in the name of God, the Carmelites came officially into being in the 13th century, when pilgrims and crusaders, attracted by the spirituality of the prophet, began to settle on the mountain whose name the Order bears. Today, although they can be found in various parts of the world, the Carmelites have remained connected to their source; they have a monastery in Haifa, Jerusalem, Nazareth and finally Bethlehem, and Carmelite fathers live in Haifa (Stella Maris) and Muhraqa.

It was around 1209 that the Latin Patriarch of Jerusalem of the time, known today as Saint Albert of Jerusalem, wrote the rule that would define the way of life of the Carmelites. After their departure from the Holy Land due to the Mamluk conquests, the Carmelites, forced to adapt their way of life, stopped living as hermits and became more like members of a mendicant order. The rule underwent various modifications, also due to the reforms that the Order experienced – the most famous being that of Saint Teresa of Avila, which gave rise to the foundation of the Discalced Carmelites. Their rule demanded a return to the sources of Mount Carmel and a rapprochement as close as possible to the way of life of the hermits of the time. This led to a desire to return to the Holy Land.

But it was not until the 19th and 20th centuries that this desire really took shape, with the creation in 1873 of the Pater Noster monastery atop of the Mount of Olives. It was followed the one of Bethlehem in 1876, of Haifa in 1892 and of Nazareth in 1910. "Each monastery has different origins," explains Sr. Anne-Francoise, a Carmelite from Bethlehem. "We were founded by the Carmel of Pau, where St. Mary of Jesus Crucified (Mariam Baouardy) entered in 1867. Thirty-four years later, the Carmel of Bethlehem founded the Carmel of Nazareth. As for the other two, the one in Jerusalem was founded by a sister from the Carmel of Lisieux (France) who left first to found the Carmel of Saigon, and the one in Haifa by sisters of the Carmel of Avignon (France)." 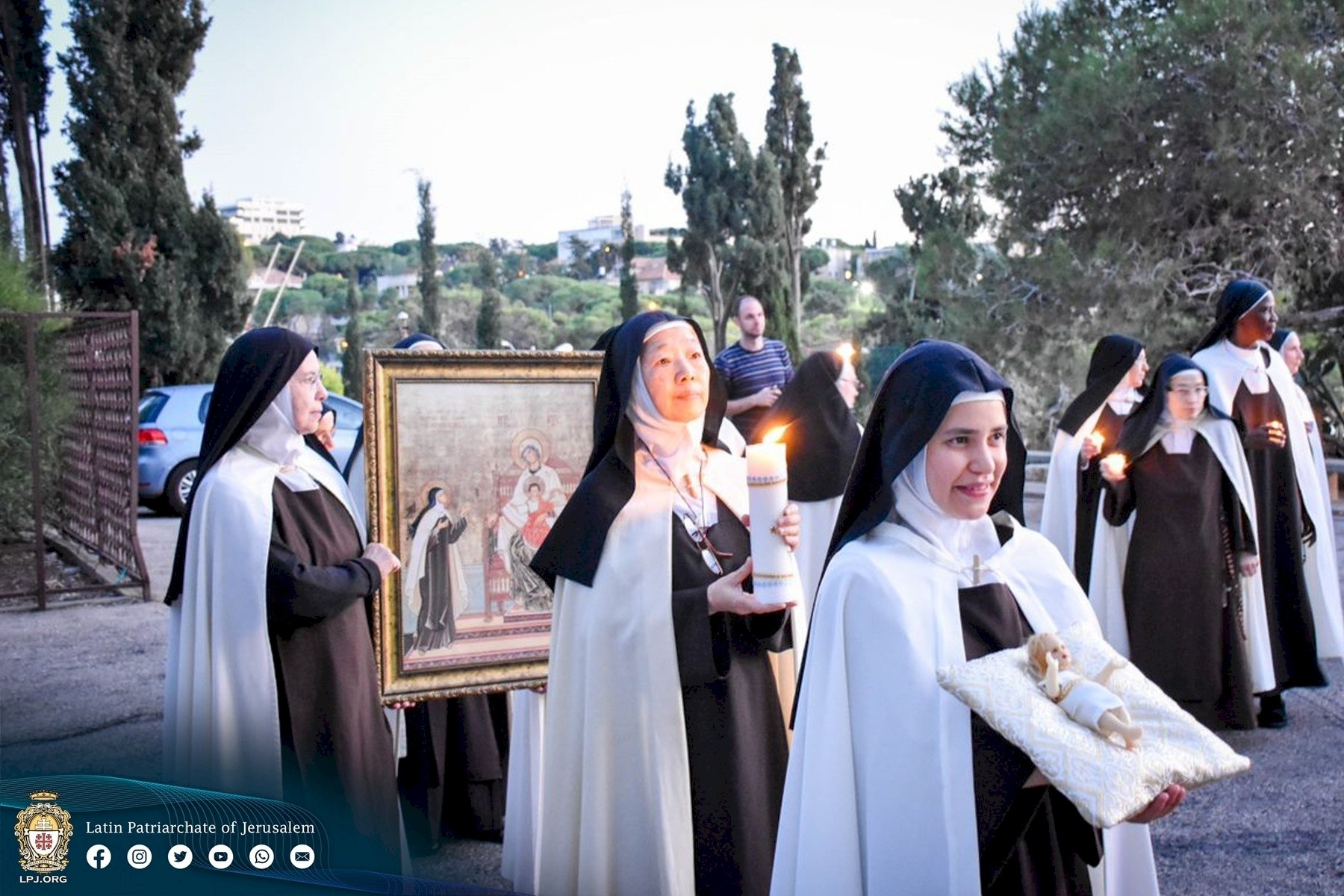 During a procession in Haifa

A life of prayer and work

Today, the convent in Bethlehem is home to twelve sisters, including one who has not yet professed her final vows. Each of the sisters’ days is split into several stages, divided between spiritual and manual work and periods of rest. Thus, the sisters begin at 6:00 a.m. with prayer, Lauds, Mass, and Tierce; then comes work, from 9:00 a.m. to 11:40 a.m. "Here, in our monastery in Bethlehem, we make hosts, liturgical ornaments, publications, we take care of the garden... I work on the archives of Mariam [Baouardy], for example."

Behind the parlor gate, Sr. Anne-Francoise barely looks at her notes. While she feared she would not be able to speak about her congregation, her answers are complete and precise, without hesitation. "Since we also have pilgrims coming through, we also make rosaries, and little things for the store."

For some time, the pilgrim center has become separate from the monastery. "Before, everything was mixed together, and we were kind of on top of each other. It became complicated for us to live our contemplative life, so we made the decision to welcome pilgrims elsewhere, in what we now call the center – which is run with the help of some people from Bethlehem." 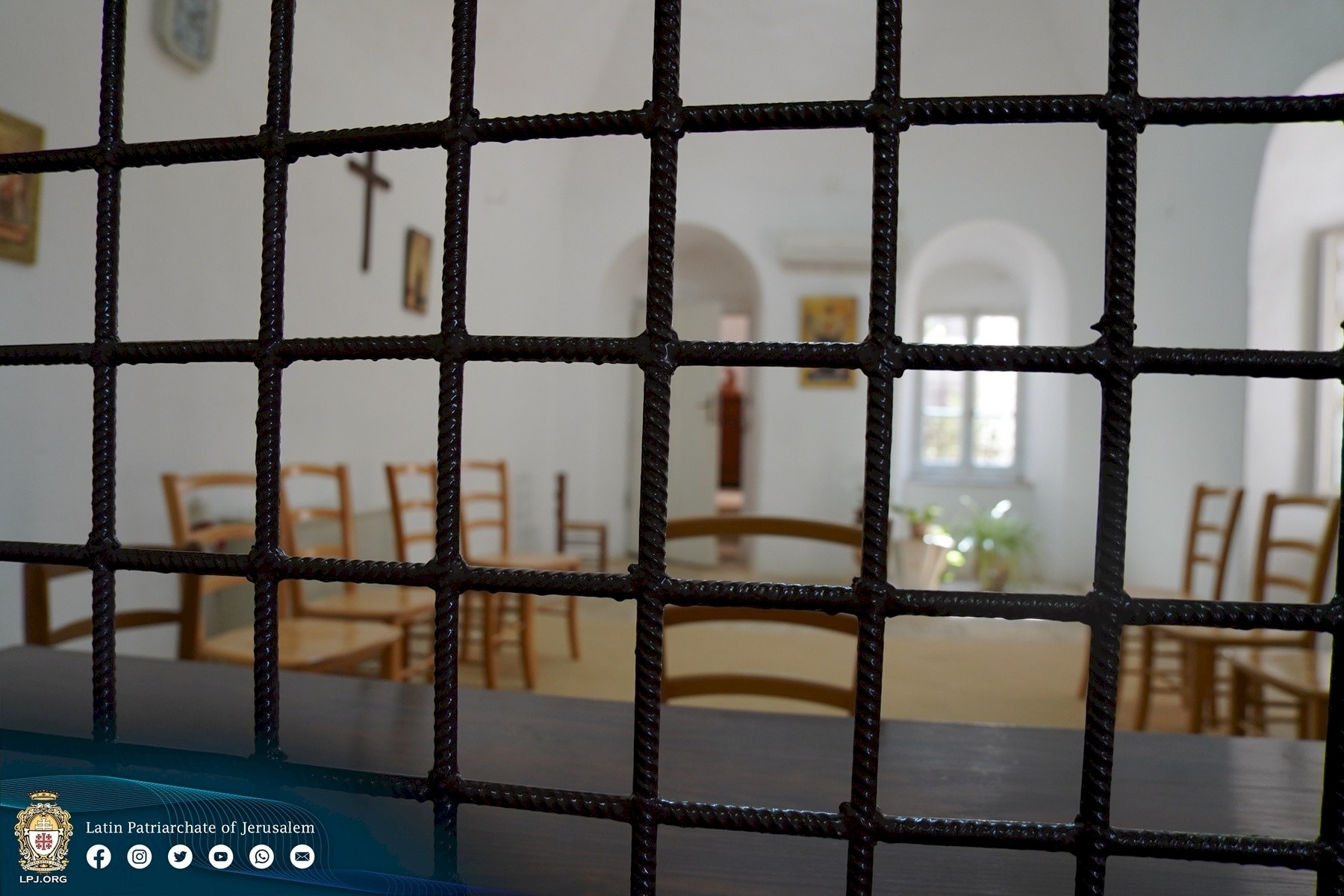 The Bethlehem parlor, where the Sisters receive visitors

For Sr. Anne-Françoise, the enclosure that characterizes her life and that of the other Carmelites is essential to protect both "our fraternal life and our life of prayer. Without it, we could be constantly solicited. We live in seclusion in order to protect our vocation of prayer, which is for the whole world, not to live isolated from it. We are actually in federation with seven Carmelites of the Middle East and North Africa, for fraternal help and formation, and we organize meetings from time to time.”

As for outings, if they are possible, they must remain rare and for specific reasons. "We are like a family. If in a family, the parents or the children go their own way all the time, there is no more family nucleus, no more structure.”

Thus, twice a day, the sisters benefit from a time of recreation, advocated by Saint Teresa of Avila, during which they live a moment of conviviality and sharing. These times alternate with times of prayer, rest, readings and liturgical offices, during which the sisters dedicate themselves to praying for the world and the Church.

The church of the Carmelites in Bethlehem

Becoming a Carmelite Sister is a long process. It begins with one or two years as an aspirant, during which "you take the time to discover and to get to know the Order, but also to follow a catechetical formation if necessary," explains Sr. Anne-Françoise. Then comes the postulancy (about a year), followed by the novitiate (about two years) and the first vows (between three to six years). "In all, the formation lasts between nine and twelve years.”

Sr. Anne-Francoise entered the Carmelites at 29, after passing the agrégation (professional exam for teachers and professors in France) in mathematics and teaching in a state high school. Raised in a deeply Christian family, she discovered religious life only very late, through her own life and with the help of her spiritual father. "Prayer has always been the most important thing in the world to me. Except that I didn't know how to do it. I wanted to pray, but I didn't know how. It was only later that I understood that the desire to pray was already prayer: so, after a while, I discovered that this prayer of the heart, of relationship with God, was there, alive in me."

It was by meeting other people in search that little by little, Sr. Anne-Françoise began to visit several religious congregations. She had an experience in a Carmelite monastery in France, but felt a hesitation. "Contemplative life attracted me but when I experienced it for the first time, I had doubts, I didn't know anymore. So I simply asked God for His will to be done.

The answer she received was clear. "At a certain point, I knew what God wanted and what I had to do. All my doubts were gone, all my questions were gone. And with them all the fear I had of talking about it, especially to my colleagues. In fact, they all came to my profession, even the principal – although his reaction was incomprehension."

The garden of the Carmelites in Bethlehem

In all, Sr. Anne-Francoise would spend 23 years in a Carmel in France before going to the Holy Land. "I was sent to Haifa thanks to a Carmelite woman I knew. Three months later, I was asked to go and help the Carmel of Bethlehem... which totally seduced me. I was seduced by this desert, and then of course by  Mariam [Saint Mary of Jesus Crucified], by her life and her spiritual journey. It is thanks to her that I discovered the Arab world with all its great saints, whom I did not know at all.”

Today, like the other Carmelites in the Holy Land, Sr. Anne-Françoise lives alongside the current prioress, Sr. Rafaela, and the other sisters, in a multilingual environment: Arabic, French, Spanish, Croatian, English, Japanese, Vietnamese... “This mixture of languages and cultures is both rich and demanding. Sometimes things are a bit complicated," she admits. "But it is above all a source of joy and simplicity, which is the beauty of our Carmel, the charm of the fraternal life that we experience every day, in the image of the first hermits of Mount Carmel.”

Next chapter: the Sisters of Saint Dorothy, Daughters of the Sacred Hearts