Portraits of Sisters in the Holy Land, final chapter: the Rosary Sisters 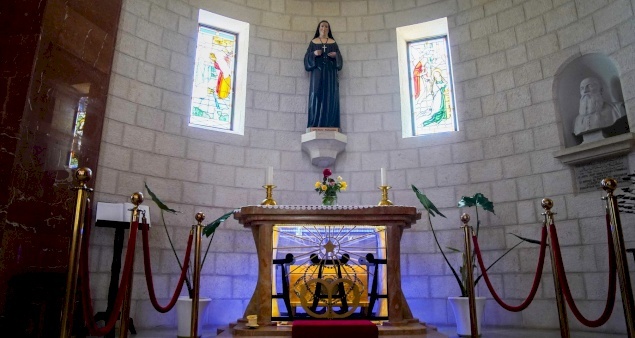 Portraits of Sisters in the Holy Land, final chapter: the Rosary Sisters Available in the following languages:

HOLY LAND – They wear blue, brown or white… They work in offices, in schools, in institutions, in churches… They carry crosses around their neck, rings around their fingers, veils on their heads… They are the living stones of the Mother Church, the souls working discreetly to make the Church radiate. After meeting ten small female congregations in the Holy Land, lpj.org invites you today to visit the Rosary Sisters. 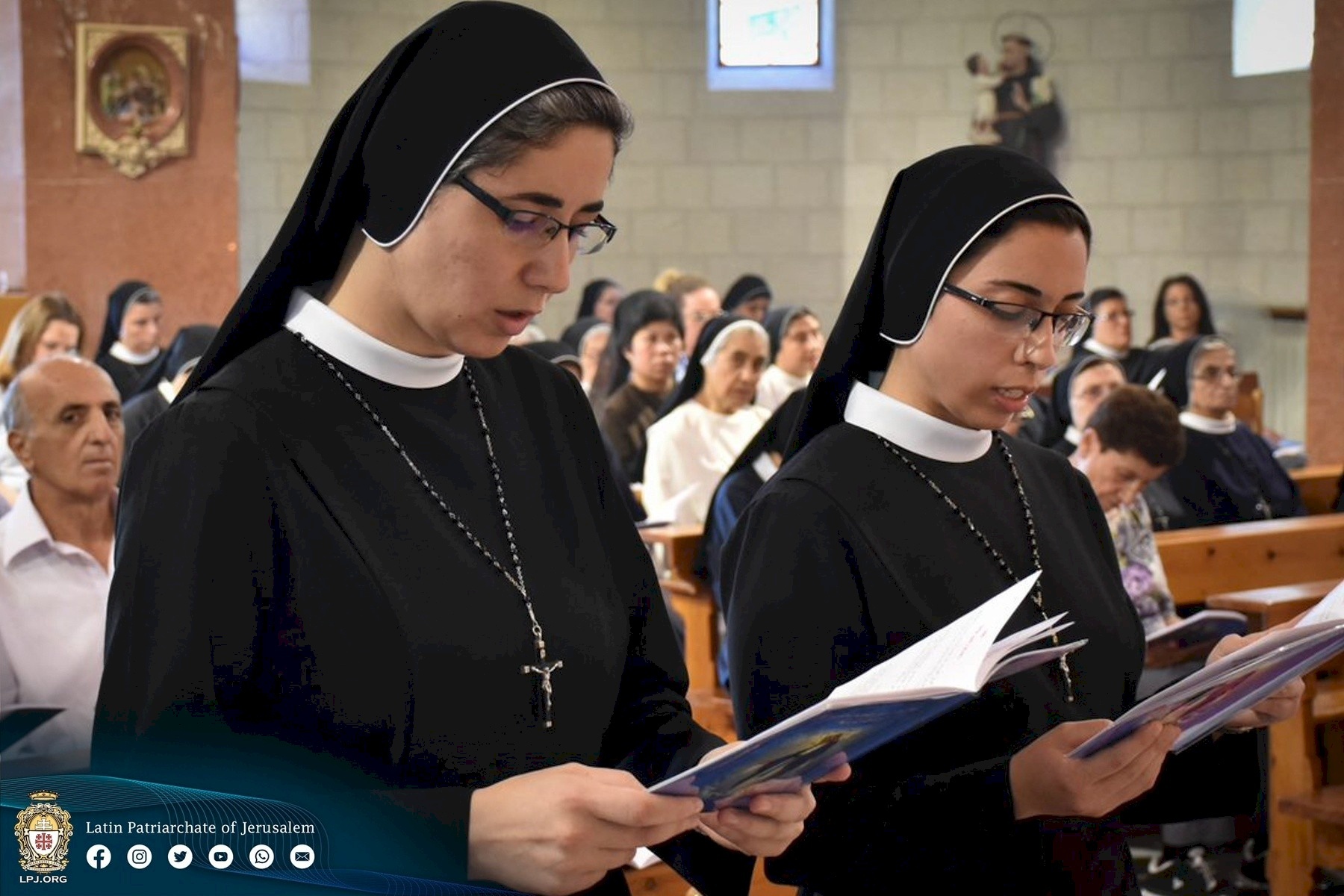 Two Rosary Sisters professing their perpetual vows in the church of their mother house, in Jerusalem

It would have been difficult to write a column about female congregations living in the Holy Land without mentioning the Rosary Sisters. Founded in Jerusalem in 1880 by a young girl from Jerusalem, only congregation of the Holy Land to have exclusively local, Arabic-speaking members, and renowned by the local Christians for their pastoral, spiritual, educational and social work, it now has members all over the Middle East, as well as in Italy (Rome).

The congregation of the Rosary Sisters came to life in 1880. The first ten Sisters, who were all from Jerusalem, professed their vows in the co-cathedral of the Latin Patriarchate, and came to live in a neighboring house next to the Knights’ palace. For years, everyone believed that it was Father Joseph Tannous, a diocesan priest of the Patriarchate, who founded the congregation; whereas in reality, it was Sultanah Maria Ghattas, now better known as Saint Marie Alphonsine Ghattas – a young Palestinian Christian born in Jerusalem, and member of the Congregation of Saint Joseph of the Apparition.

“Father Tannous was the one who rented our house next to the Patriarchate. He was also the spiritual director of the first members of the congregation, and this is why we consider him to be our co-founder,” explains Sr. Virginie, a Rosary Sister living in Jerusalem. “Actually, before Sultanah died, no one knew she was the original foundress.”

Feeling called by God during the consecration of another young woman, Sultanah was however unable to answer Him right away, as her father, fearing for her safety, refused to have her shipped to France to become a novice for the Sisters of Saint Joseph. He eventually changed his mind after getting injured in a fire and seeing his daughter’s dedication to him, but on the condition that she completed her formation and professed her vows here, in the Holy Land. Later, as local Christian women began to ask for a local congregation to be created, Sultanah had a vision of Mary asking her to found “here in the Holy Land, where my son and I had our joys, our sorrows and our moments of glory, a congregation of the Holy Rosary.” 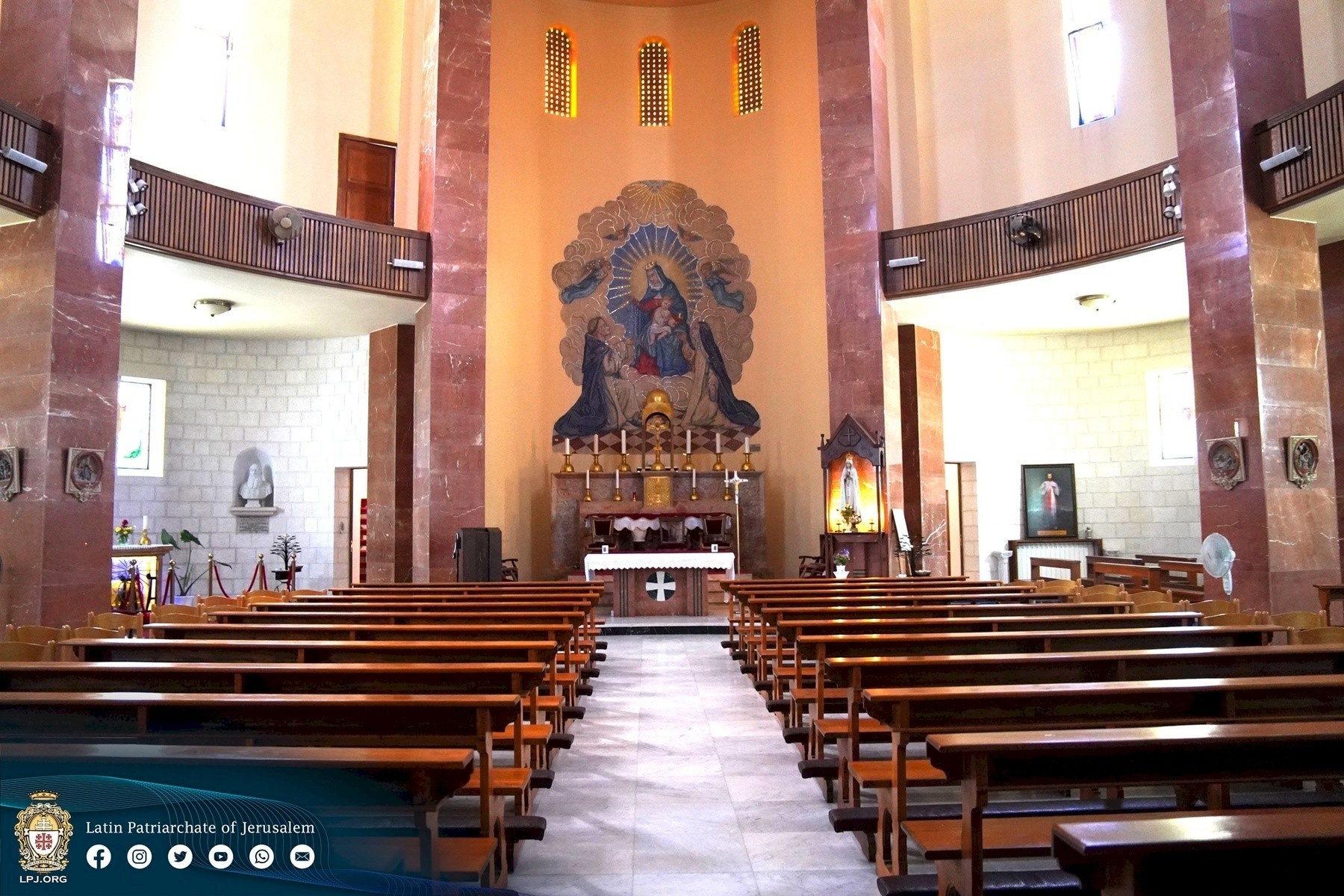 The church of the Mother House of the Rosary Sisters, built as an octogen

Not knowing where to start, Sultanah received another vision of Father Joseph Tannous with a halo above the head, and turned to him for help – which led him to take on the role described above. “Only on her deathbed did Sultanah ask her sister, who also became a member of the Rosary congregation, to look for her diary and to bring it to the Patriarch, to let everyone learn the truth about her,” tells Sr. Virginie.

Saint Mary Alphonsine was canonized in 2015 by Pope Francis.

“Today, we Rosary Sisters work in parishes of the Patriarchate, schools, and a couple of hospitals. We have a house in Ein Karem, which used to belong to the family of our foundress, as well as two houses in Jerusalem, including one [in Mamilla], whose location used to be close to Sultanah’s brother’s house.”

As a matter of fact, the congregation of the Rosary Sisters still has relationships with Saint Mary Alphonsine’s family, whose members, now living in Canada, write to them from time to time. “One day a sick sister who was in the hospital got recognized by a female doctor who happened to belong to the third or fourth generation of the family,” Sr. Virginie continues. 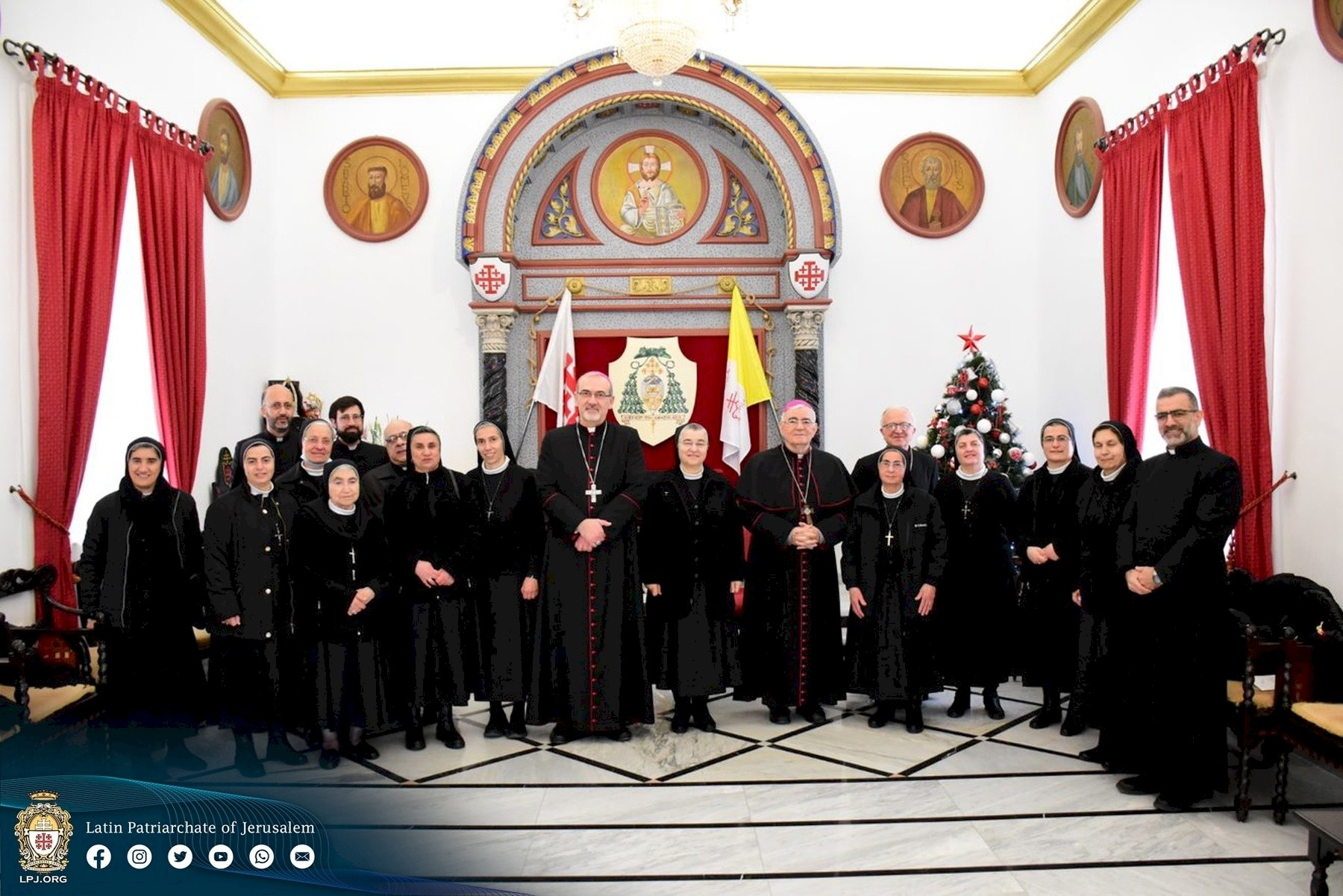 The Rosary Sisters with His Beatitude Pierbattista Pizzaballa, Latin Patriarch of Jerusalem

Because they all speak Arabic and are from the Middle-East, the Rosary Sisters were – and still are – key to allow the population of the Holy Land to have access to education and pastoral and spiritual care. “Sometimes we feel like the Heavens cannot hear us, that they do not listen. But I see the creation of my congregation as an answer of Heaven to our needs. I am very proud to be a Rosary Sister, because they were the ones who first went to the isolated villages, where there was a lot of poor and needy people and families, to educate girls and women and to spread the Word of God.”

Sr. Virginie pauses for a moment. After having talked about her congregation, she’s asked to talk about herself. Her story is straightforward; from the very beginning, she knew she wanted to be a sister.

“My faith and my love of Christ came naturally thanks to my education, my family and the environment I grew up in. And whenever I saw sisters around me, I felt the desire to join them.”

One day, when still a child, a priest asks her and her classmates what they aspire to be when they grow up. Hearing Sr. Virginie’s answer, he offers to take her to a convent; but her parents decide otherwise. “They told me, ‘finish high school first and then you’ll see’. So I did… And then I entered the congregation of the Rosary Sisters.”

After professing her vows, Sr. Virginie, whose first motivation was “to preach the Gospel”, became a teacher of catechesis in Rosary schools, in Jerusalem and in Amman. Afterward, she became a lecturer in Bethlehem University and the head of the Catechetical Office of the Latin Patriarchate of Jerusalem, for 15 years. She is now the secretary general of her congregation. 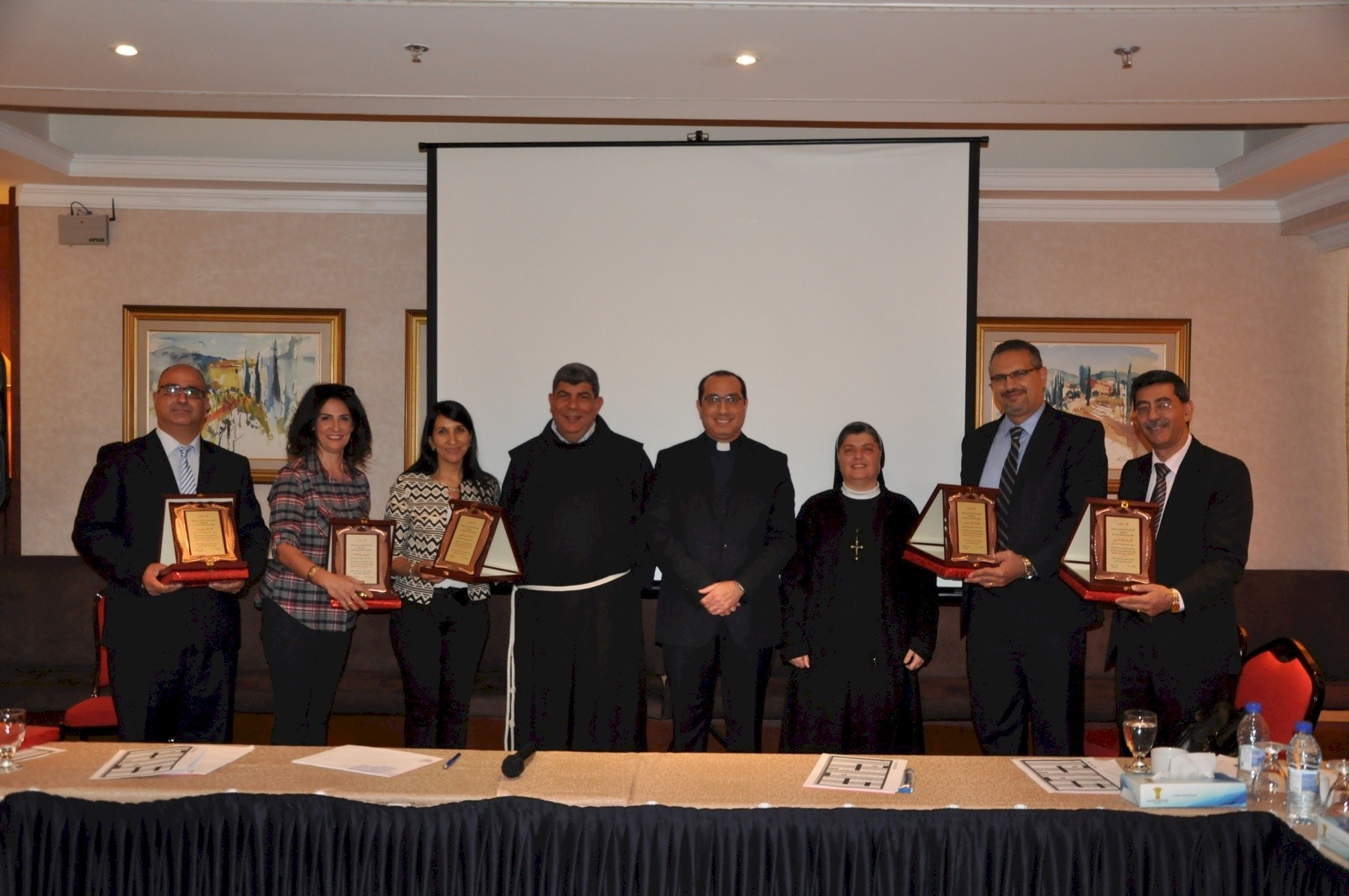 Sr. Virginie with the Ecumenical committee for Catechesis, on November 9th, 2019

When speaking about motivates her today, Sr. Virginie speaks of local Christians. “I’ve always wanted to encourage Christians to be rooted in their land and to be loyal to our Mother Church of Jerusalem. To have a personal faith, not an inherited one. Today people get their faith from their parents, but it doesn’t necessarily mean anything. Some, although they are Christians, do not follow Christian values, do not follow what Jesus taught us in their behavior and attitudes. So I try to rekindle the flame of their faith, and to keep alive the ones that are already there, so that the Holy Land always has Christians living on its soil, where Christianity was born and spread to the entire world.”