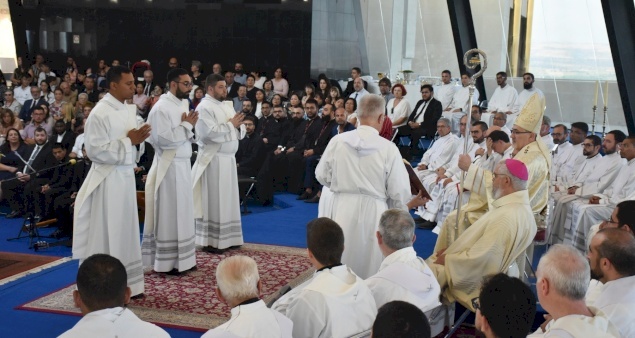 Priestly ordinations in Domus Galilaeae Available in the following languages:

KORAZIM - In Domus Galilaelae, where seminarians from all over the world are trained to serve the Church, three young men were ordained priests by His Beatitude Pierbattista Pizzaballa, Latin Patriarch of Jerusalem, on Saturday, June 11th. A cause of great rejoicing for the Mother Church, especially for the parishes of Madaba, Amman and Zarqa North, to which the three ordained were assigned.

The celebration, which was in Italian but translated simultaneously in several languages (English, Arabic and Spanish), was concelebrated by Mgr Rafic Nahra, Patriarchal Vicar for Israel, Mgr Jean-Pierre Cattenoz, archbishop emeritus of Avignon, and Fr. Francesco Voltaggio, rector of the Redemptoris Mater seminary of Domus Galilaelae. It was also attended not only by the ordained's families and friends (who came from Colombia and California, Qatar, Italy and Eilat), but also by many Christian communities of Galilee, as well as the seminarians of the Patriarchal Seminary of Beit Jala and their rector, Fr. Bernard Poggi.

"Priesthood is a great gift but also a great responsibility," said Patriarch Pizzaballa to the three future priests as they waited solemnly to receive the ordination. "It is a gift that is given to you through the Church; It has to stay a gift and not your own possession. And this is only possible if the spirit is with you and accompanies you." Reminding them that they were "called to serve the different communities of the Church", he added, "You have to make it possible so that these communities grow in a spirit of freedom. They have to be united; as in the holy spirit, we have to become one."

Towards the end of the celebration, under loud applause, the Patriarch announced where the three new priests would be sent: Madaba for Samuel Costanzo, Zarqa North for Mauricio De La Cruz, and Amman (Sweifieh) for Paolo Sepich.

As for Samuel and Mauricio, more about their journeys toward priesthood can be read through the interviews they gave to lpj.org for the World Prayer Day for Vocations.