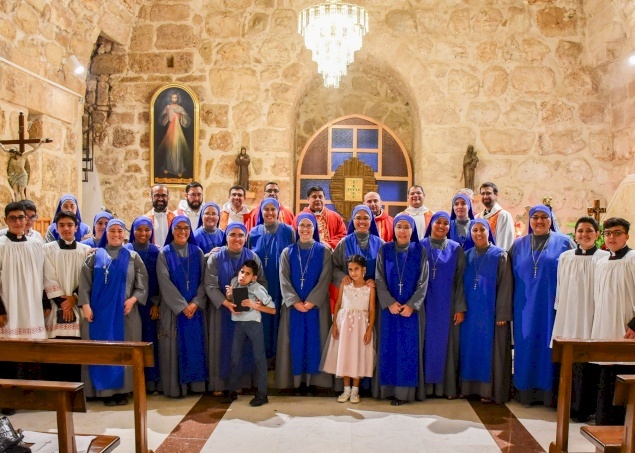 HOLY LAND - On October 1, 2020, the Religious Family of the Incarnate Word celebrated the 25th anniversary of its apostolic work and presence in the Holy Land and the Middle East. On this occasion, the congregation prepared a video, in Spanish, that shows important stages in its life and mission.

Nowadays, the congregation serves through its communities in a number of countries in the Middle East and North Africa; in Egypt (Mary the Egyptian Community), in Jordan (St. Mary Salome Community), in Syria ( Communities of St. Thecla and the Holy Martyrs of Damascus), in Palestine (Communities of Our Lady of Bethlehem “Hogar Niño Dios”, St. Tabitha, Sts. Valentina and Thea, St. Maria Josepha Rossello, Our Lady of Ephraim and the Latin Patriarchal Seminary).

After receiving the blessing of St. John Paul II in 1995, Sisters Maria Pía, Maria Contemplación, and Maria Cielo were the first to arrive in the Holy Land, where they formed “Mary the Jerusalemite” community whose task was to continue the mission of the Custody of the Holy Land in safeguarding and venerating the Holy Sites as well as accompanying and supporting the local Christians.

In the 30-minute video prepared by the congregation, Sr. Maria Alma points out that the congregation works to share the spiritual wealth that the Holy Land has with the pilgrims; priests, religious men and women, and members of the Third Order. “Pilgrimage to the Holy Land transforms the life of every person that visits it,” says Sr. Maria.

St. Joseph is the Patron Saint of the congregation and since the arrival of the first sisters, his providence manifested itself in their lives and times of need. Sr. Maria Cielo recounts that after a few months of her arrival to the Holy Land, with the other two sisters, their financial fund started to run out. Thus, they decided to pray for St. Joseph who answered their prayers, and later they were provided with a place at the school of the Christian Brothers de La Salle in Bethlehem.

However, after a year and a half, the Christian Brothers needed the premises for school development, and the sisters once again prayed for St. Joseph who subsequently answered; the sisters were given a place at the Bethlehem Arab Society for Rehabilitation, where their mission to work with disabled children started.

Affiliation to the Religious Family of the Incarnate Word

"Being a member of the Religious Family of the Incarnate Word is above all a grace from God," says Sr. Maria of the Incarnate Word, for being able to live in the land that witnessed the love of Jesus and His resurrection. It is also a challenge to reproduce the love of Jesus in the lives of others. Being a member of this congregation who lives in the Holy Land is a great responsibility as the sisters form a family that lives and works together. The charism and mission of the congregation also urge the sisters to accompany persecuted Christians and to show that the Church is close to them, especially in places of conflict and war.

“It is difficult to summarize in a short time the 25 years of grace that God has poured out in our province through Mary,” says Sr. Maria Cielo. “Everything has been a blessing from the Lord, the adversities and the joys.

Sr. Cielo expressed gratitude to all the sisters who had served in the province in the Middle East and were vital to the growth of their work. She thanked the clergy who provided them with spiritual support, and the laypeople and benefactors who gave them their full support, especially for those who live in conflict and war zones.

The congregation also thanked the Latin Patriarchate of Jerusalem and the Custody of the Holy Land for their help to implement its apostolic work and serve the Lord in His land.