The Grand Magisterium gathered online for its Fall meeting 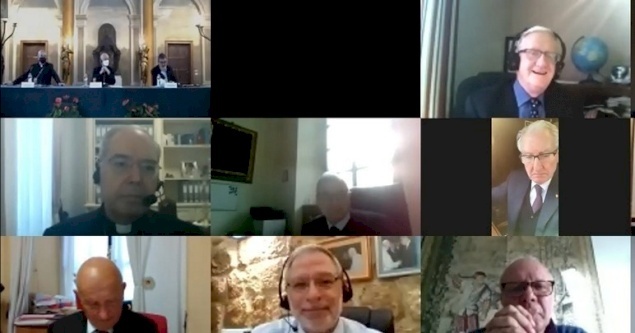 The day after the celebration of Mass in honor of Our Lady of Palestine, on 21st October, which was presided over by the Grand Master of the Order in Saint Peter's Basilica, the autumn meeting of the Grand Magisterium was held. Members met virtually, due to the ongoing health crisis, while the Grand Master, the Governor-General, the Apostolic Administrator of the Latin Patriarchate of Jerusalem, the Lieutenant General and the Chancellor participated live from Palazzo Della Rovere in Rome.

The meeting emphasized the willingness of those responsible for the Order to step up support for the Holy Land by increasing the budget by 3.5% next year, building on the undeniable generosity of the Knights and Dames, splendidly demonstrated in recent months through the extraordinary help given by more than 3 million euros in response to the Covid-19 epidemic.

Cardinal Filoni's emphasis on the spiritual dimension of belonging to the Order promotes awareness among members of their great and beautiful vocation and, at the same time, it stimulates the renewal of their material commitment through the contributions made by the Lieutenancies to the life of the Mother Church in Jerusalem. Now that the main problems of the Order are resolved, in particular those related to Patriarchate’s long-standing debts - as Governor-General Leonardo Visconti di Modrone has pointed out - it is important to look ahead and strengthen the development of the Order in countries where it is still under-represented. This is being achieved thanks in particular to the ongoing and direct relations between the Grand Magisterium and the Lieutenancies, as well as the prolific activity of the commissions created over the past three years.

For further details, we invite you to read the speeches given by the Grand Master and the Governor-General during the meeting of the Grand Magisterium, as well as the important conclusions of Cardinal Filoni, almost a year after Pope Francis appointed him as head of the Order.

“We are moving forward with determination”

Your Eminence, Excellencies, dear brothers and sisters, unfortunately, the ongoing health emergency has forced us once again to organize the meeting of the Grand Magisterium with a different formula from our usual one.

In recent months the Cardinal Grand Master has told me more than once how he was eagerly waiting for this appointment to enjoy a broad discussion in order to establish the strategic guidelines for the coming years.

Providence has decided otherwise, but we must not allow ourselves to be affected by adverse circumstances: on the contrary, we must intensify our efforts to reach our goals.

With this in mind, I would like to begin my report on an optimistic note: three years ago, when I was appointed Governor-General, four problematic topics filled the agenda of the Grand Magisterium meetings, with discussions, sometimes lively, sometimes frankly disheartening:

the debt contracted by the Patriarchate because of the University of Madaba;

the stalemate in obtaining the approval of the new Statute;

the never-ending legal dispute with the tenant of Palazzo Della Rovere;

the painful split within the Lieutenancy of France.

Today all these problems have found a solution. Now we can turn our attention to the future rather than to the past.

The major issues on the table for the future are: first of all, obviously, how to overcome the effects of Coronavirus, an unexpected variable that has upended our lives and our plans but has also allowed us to discover a generosity above all of our expectations.

The appeal addressed by the Cardinal Grand Master to the members of the Order has resulted in the collection of three million euros for emergency humanitarian aid linked to the pandemic in the Holy Land.

The generosity was such that, paradoxically, it has resulted in some difficulties in collecting resources for ordinary and institutional expenses, since all destinations chosen for the donations by our members were aimed at the Coronavirus emergency!

A gradual rebalancing is now necessary, also to avoid making a massive recourse to the statutory reserves.

A second element that has characterized these last months is the strong impulse given by the Cardinal Grand Master to the promotion of spirituality in the Order, through the publication of a booklet that will soon be distributed to all the Lieutenancies and which will give a solid reference to what it means to belong to the Order and to the commitments such a decision entails.

His Eminence made a similar effort on the communication front, not only through the media but also through a direct dialogue with the faithful, launching “The Grand Master's Corner" a new column on our website.

A third element that must be mentioned is the great renovation of Palazzo Della Rovere to restore the dignity deserved by the seat of the Order and to start a new season of hotel hospitality in the future, hopefully, more successful than the previous one.

The rules introduced by the Holy See in the last weeks with the New Procurement Code have determined a pause in the schedule of works to allow appropriate investigations with the Vatican authorities on the procedures applied.

But we are moving forward with determination on the path we have traced and soon we are expecting to start the renovation.

I cannot fail to mention also the ongoing expansion effort of the Order both through the contacts made to assess the potential interest to the establishment of new Magistral Delegations and Lieutenancies and through an action aimed at fostering greater knowledge of the Order and its charitable work.

Contacts with the Lieutenancies are constant, thanks also to the support of the Vice Governors, whom I want to expressly thank here.

I wish to end these introductory words by reaffirming my total devotion to the Holy Father, my humble obedience to the Grand Master, and my firm determination to continue - if requested - to invest my energies in fulfilling my mandate at the service of the Church and of the Holy Land.

Reaching out to those on the margins and "broadening" inclusiveness

Concluding the Grand Magisterium meeting last October 22 - held online due to the global restrictions for Covid-19 - the Grand Master, Cardinal Fernando Filoni, offered some reflections in the light of what was shared during the working sessions.

“We cannot think that our Order as we see it today is the best it can be. In this sense we must be stimulated to make new proposals”, he commented, inviting us to look ahead and never feel we have reached the maximum of what our Pontifical Institution can offer. We are always on a journey and the margins for improvement are a stimulus to grow in the life of the Order and in our personal spiritual life.

The Grand Master's first invitation to reflection regarded those who are already Knights and Dames. "My perception is that there are various members of the Order who live on the margins of our institution and Pope Francis has accustomed us to look at those who live on the margins. Why did the enthusiasm, generosity, and participation of these Knights and Dames cool? It is up to us to examine what we can do so that their participation in the Order rediscovers the same spirit as when they made their commitment to God, the Church and their brothers and sisters through charity ". Leaving this question to the reflection of the members of the Grand Magisterium, Cardinal Filoni did not hesitate to recall that reaching out to the less active members is our responsibility so as not to forget those on the margins and that this "rapprochement" can be supported by strengthening our spirituality which the Grand Master is extensively supporting in his ministry.

A second point that Cardinal Filoni has particularly at heart is that of inclusiveness. "Who could we possibly include and thus make the Order even more alive and participatory?" He asked the members of the Grand Magisterium who are the small governing body in representation of the entire Order which has 30,000 members in various continents. In this regard, he mentioned two directions.

“Our Order needs to focus on seeing if we can do something more for the young. We are not alone - he said - an Order of people who have reached a certain level and a certain age. We can enrich ourselves through the presence of young people, with their energies, ideas, and commitment”.

In addition, the Grand Master recalled the reflection inaugurated in the Grand Master's Corner on the website of the Grand Magisterium (www.oessh.va ) regarding the possible participation of women religious within the Order.

His last word was of thanks for all the members of the Order and for their openness to the outside, in that dynamic of an outgoing Church so often suggested by Pope Francis: "I thank you for the help you give to the Church of Holy Land and not only. This is why we are working to give a different perception of the Order which, at times, can be negative or reduced to its specifically external aspects. This is not the case and I believe that being able to show our active and positive image is to the advantage of God, the Church and the Order itself ". 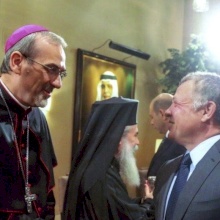 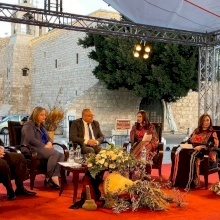