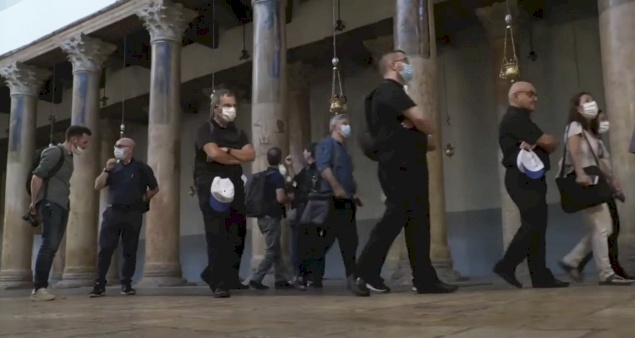 The Holy Land welcomes first pilgrim groups after more than a year Available in the following languages:

HOLY LAND - From July 5-9, 2021, the Holy Land witnessed the visit of the first group of Italian pilgrims, after an absence of about a year and a half following the outbreak of COVID-19. This visit by Cardinal Enrico Feroci, parish priest of Our Lady of Divine Love Sanctuary in Rome, accompanied by a delegation of priests, journalists, and tour guides, was organized by “Opera Romana Pellegrinaggi”, an organ of the Holy See which accompanies pilgrims along the paths of the Spirit around the world.

Cardinal Feroci described this pilgrimage to the Holy Land, which aimed to visit the holy places and interact with the local Christian community, saying: “We need to strengthen the bond between the Mother Church, the Church of Jerusalem, and the main Church, the Church of Rome. The pandemic has separated us, not only our families but also our Churches. We seek to overcome this separation so that we return to the original communion”.

Msgr. Remo Chiavarini, general director of “Opera Romana Pellegrinaggi”, expressed his hope that tourism would soon return to the Holy Land, and said: “Since last year in February, we have returned with great joy, with great surprise, with great emotion. But I’m convinced that my hope is that the pilgrims will return soon, and I hope that in the meantime, those unfortunate health problems that make coming here so tiring, will also disappear”.

On Tuesday, July 6, H.B. Patriarch Pierbattista Pizzaballa, Latin Patriarch of Jerusalem, welcomed the Italian delegation at the Latin Patriarchate of Jerusalem. During the meeting, Patriarch Pizzaballa described the pilgrimage to the Holy Land as a new form of apostolic work that is based on a spiritual motive, “one cannot ignore the experience of living the word of God here, as the word became flesh”. The Patriarch also touched on other topics, including the life of the Christian community in the Holy Land and the challenges it faces. He also encouraged the return of pilgrims to the Holy Land.

This pilgrimage included visits to the Christian, Islamic and Jewish holy sites in Jerusalem, Bethlehem, and Nazareth, as well as several meetings and visits, including a meeting with Fr. Dobromir Jasztal, Vicar of the Custody of the Holy Land, and a visit to the Piccirillo Handicraft Center in Bethlehem, run by Fr. Ibrahim Faltas.

In an interview with Radio Vatican, the Patriarch of Jerusalem spoke about the return of pilgrims to the Holy Land, “the return of pilgrims means for Jerusalem to breathe with two lungs again”. He referred to the sadness that prevailed in the country due to the absence of pilgrims and the problems that ensued, especially for families working in the tourism sector, expressing his hope that things would return to normal soon.

It is worth noting that the first group of pilgrims arrived in the Holy Land on May 27, 2021. It included 12 seminarians from the Concordia Seminary in Missouri, led by Pastor Tom Zelt, Senior Pastor at Prince of Peace Lutheran Church in Fremont, California. The American delegation visited holy sites in Jerusalem, the Negev, Masada, and Nazareth, before leaving the country on June 10.