The Latin Patriarchs of Jerusalem - Ten facts about Filippo Camassei 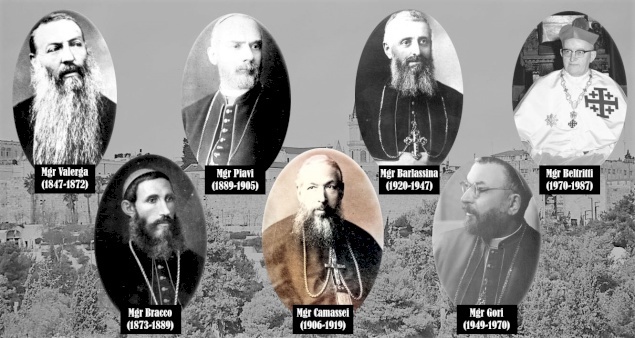 The Latin Patriarchs of Jerusalem - Ten facts about Filippo Camassei Available in the following languages:

While Mgr Valerga and Mgr Bracco were born into poor families and had to struggle to afford their studies, and Mgr Piavi took up arms as a teenager, Mgr Camassei had a more peaceful childhood, which he spent in a Christian family in the heart of Rome. He was not the only Camassei to have a brilliant career; his brother, Charles Camassei, became a commander. It was he who described the first Mass celebrated by Mgr Camassei at St. Apollinare on April 12, 1872, at the age of 24.

Attracted to the priestly vocation at an early age, Mgr Camassei was able to secure a place in the Pontifical Roman Major Seminary and was even given the position of prefect of discipline. The seminary, now located near the Archbasilica of St. John Lateran, was established in 1565 by Pope Pius IV, following a decision of the Council of Trent to establish a seminary in every diocese. Although the instruction of the seminarians was initially provided by Jesuits, the students were intended to become priests in Rome rather than join the order. Mgr Camassei entered the seminary in 1863, became a subdeacon in 1870, a deacon in 1871, and was ordained a priest in 1872.

In 1906, when the Pope chose Mgr Camassei to become Latin Patriarch of Jerusalem, his predecessor had been dead for over a year. His appointment thus caused great joy in the Holy Land, and people there welcomed him with enthusiasm. After an eventful disembarkation due to a rough sea, Mgr Camassei was first received by the Consuls of France and Italy, the representative of the Governor of Jerusalem and several civil and religious notabilities. He then went to the church in Jaffa and made a series of visits before preparing for the solemn entry into Jerusalem on March 19, 1907. Shortly before the ceremony, when he was presented with his ceremonial clothes and various decorations, he refused, exclaiming: "How could I, in front of Calvary, wear decorations and show grandeur!"

After the death of Mgr Luigi Piavi, the seat of Grand Master of the Order of the Holy Sepulchre, traditionally held by the Patriarchs, remained vacant for about two years. This lack of governance led to a movement within the Holy See to permanently abolish the Order of the Holy Sepulchre. A papal decision was to be made when Mgr Camassei, who had not yet been officially appointed Patriarch, interceded on behalf of the Order to convince Pope Pius X to retain it. His intervention was crowned with success: in 1907, the Pope issued the apostolic letter Quam multa to consolidate the Order's status.

Endowed with great piety and deep faith, Mgr Camassei devoted much of his time to prayer. In particular, he liked to go alone to the Holy Sepulchre to meditate. Thus, "almost every day, when the grave concerns of his ministry allowed it, he went to the Sepulchre of the Savior. He would enter the Edicule alone and bathe the marble table with tears. He poured out his soul, soaked up his courage, and emerged radiant with joy mixed with a sweet sadness. Then he climbed Calvary where he knelt with filial tenderness before the Virgin of Sorrows, keeping his eyes fixed on those of Mary" (Moniteur diocésain, July 1952).

That year, Palestine was devastated by a plague of locusts. For several days, crops, fields and vegetation were ferociously attacked by swarms of insects. Mgr Camassei, moved by the plight of the people of his diocese, decided to pray publicly for God's intervention to remove the locusts. The ceremony, which took place in the Co-Cathedral of the Patriarchate, was successful: according to the testimonies of the time, the locusts disappeared soon after.

"For a sick priest, I would not hesitate to make the greatest sacrifices," said Mgr Camassei. During his time as Patriarch, he indeed showed great charity towards those burdened by illness. One day, a leading figure in Rome invited him to a solemn reception; at the same time, he learned that a sick person was about to undergo a major operation. Without hesitation, Mgr Camassei apologized to his host and hurried to the convalescent's bedside.

The Latin Patriarchate suffered greatly during the First World War. Missions were destroyed, institutions had to be closed, congregations were expelled and the Patriarch himself was forced to leave his seat under pressure from the Turks. On November 10, 1917, the chief of police and his men arrived at the headquarters of the Latin Patriarchate; the next day, Mgr Camassei was summoned by the Governor of Jerusalem. Sometime later, he was exiled to Nazareth. He then found refuge with the Franciscans, and continued to look after the parishes in the north of Palestine until the Allied victory. Then, on November 3, 1918, he was finally able to return to Jerusalem.

During a visit to Rome in 1919, Mgr Camassei was named a cardinal by Pope Benedict XV and given the title of S. Maria in Ara Cœli. He did not return to Jerusalem, but missed it deeply; it is said that on several occasions, he expressed the desire to return there. Unfortunately, only thirteen months after his appointment, on January 18, 1921, he died suddenly just after celebrating Mass, at the age of 73.

Unlike his counterparts, Mgr Filippo Camassei is the only Latin Patriarch of Jerusalem since the restoration of 1847 whose funeral was not celebrated in the Holy Land. Having never been able to return to Jerusalem after his appointment as a cardinal, just after the end of the First World War, he was buried in the monumental communal cemetery of Campo Verano, located in the Tiburtino district of Rome. 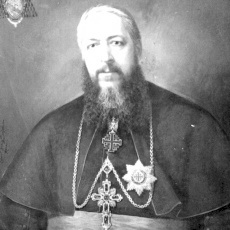 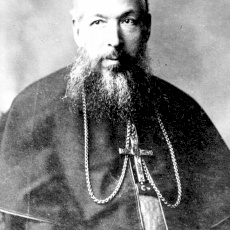