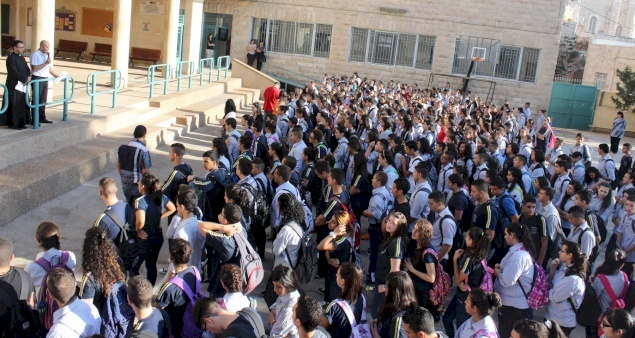 The multiple and international initiatives to support Christian schools in the Holy Land Available in the following languages:

HOLY LAND - Among the many examples of mutual aid within the Christian community of the Holy Land, those concerning schools, especially those of the Latin Patriarchate of Jerusalem, are numerous. Associations, twinning, sponsorships... There is no shortage of ways to help these establishments, which are essential not only to help maintain the Christian presence in the territory, but also to educate future generations according to common values, such as charity, open-mindedness, diversity and unity.

Among all the existing initiatives is the "sisterhood" established between the parishes of Beit Sahour and Massachusetts, coordinated by the Order of the Holy Sepulchre. Born in 2018 on the occasion of the 150th anniversary of St. Mary's Parish in Holliston, this project allows the faithful of St. Mary to join in prayer with the community of Our Lady of Fatima, in Palestine. It also gave rise to the sending of many school supplies for the students of the Latin Patriarchate school in Beit Sahour: books, DVDs, pencils...

In recent years, other similar arrangements have been set up, particularly in France. One example is the one formed between the Catholic schools of the diocese of Vannes and the schools of the Latin Patriarchate, which has allowed young French people to meet young Palestinians.

In the same vein, the association "Une fleur pour la Palestine" ("A Flower for Palestine"), born more than twenty years ago, offers to sponsor students enrolled in schools located in the Palestinian territories to support their studies.

In 2001, wishing to establish a link with the Catholics of the diocese of Jerusalem, a priest and a deacon of the diocese of Toulouse set up a correspondence with the Latin Patriarchate. The project, which allowed for a better understanding of the situation of the Christians of the Holy Land, also gave rise to a pilgrimage in 2002, with the aim of visiting not only the stones of the Holy Sites, but also the living stones of the Church in Israel and Palestine. The pilgrims thus discovered the parish of Taybeh, as well as the great difficulties of the Christians living in the Palestinian territories under Israeli military occupation. Through the Catholic school in the village, they also saw the reality of Catholic schools in Palestine: wonderful establishments, of a very good academic level, attended by both Christians and Muslims, and promoting peace by teaching respect for the human person. But also institutions in economic danger, as they are financed exclusively by family contributions. And the political situation, which is causing high unemployment, is making it difficult for many families to pay school fees. Back in France, the pilgrims therefore decided to set up an association to help these schools by sending annual scholarships: thus was born "Une fleur pour la Palestine". If the center of the flower represents the sponsored students, the petals symbolize the donors and sponsors.

It is also thanks to this system of financial transparency that, since 2002, the support of Une fleur pour la Palestine towards these schools keeps increasing. Today, it reaches 163 students from 12 schools, located in Zababdeh, Nablus in the north of Palestine, Ramallah, Taybeh, Jifna, Aboud, Bir Zeit, Bethlehem, Beit Sahour, Beit Jala and Gaza, among others. Of these schools, eight are schools of the Latin Patriarchate of Jerusalem, two of the Greek Catholic Patriarchate, and two belong to the Franciscans and Lasallians respectively: Terra Sancta Girls School and De la Salle High School.

In this synodal time, these various associations and initiatives continue to support students from diverse backgrounds, who thus receive the same opportunity to pursue their studies. This concrete support maintains the diversity and unity that makes the multiple missions of Christian schools visible.

For more information about Une fleur pour la Palestine (only available in French):