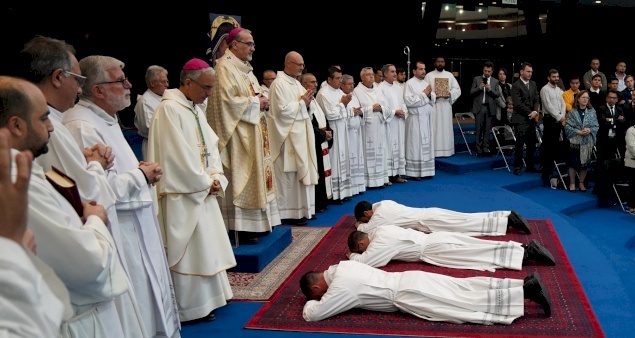 Three new deacons for the diocese of the Holy Land Available in the following languages:

DOMUS GALILAEAE – On Sunday, November 27th, 2022, three Seminarians from the Redemptoris Mater seminary of Korazin were ordained deacons by His Beatitude Pierbattista Pizzaballa, Latin Patriarch of Jerusalem, during a celebration concelebrated by Mgr Rafic Nahra, Patriarchal Vicar for Israel.

The occasion coincided with the first Sunday of the Advent, during which the universal Catholic Church celebrated the beginning of the new liturgical year. The community of Domus Galilaeae rejoiced together as the three young men vowed to serve the Lord as deacons, taking another step in their path towards priesthood.

Giacomo Dainotti, Paolo Felicetti, both 32 years old, and Igino Sistilli, 29 years old, all from Italy, chose the verse John 12:25-26 to celebrate their ordination: “He who loves his life will lose it, and he who hates his life in this world will keep it for eternal life. If anyone serves Me, let him follow Me; and where I am, there My servant will be also. If anyone serves Me, him My Father will honor”.

Near the Mount of Beatitudes, Fr. Francesco Voltaggio, rector of the Redemptoris Mater Seminary, opened the celebration by welcoming Mgr Pizzaballa, Mgr Nahra and all the bishops, seminarians, and brothers from the Neo-Catechumenal Way who were present. Then His Beatitude began the celebration of the Mass.

“In preparation of the advent season, the Lord asks us to “stay awake” for His second coming, meaning that he expects us to live a Christian life centered around Him, putting our trust and faith in Him, always keeping in mind that there is no meaning in a life lived without Christ,” said His Beatitude while commenting on the Gospel reading from Mathew (24:37-44).

“To serve the Church at the altar is to be a witness to the presence of the Lord, and to make His voice heard in the world. This is the most precious gift He can give you.” Such were the words of encouragement that the Patriarch addressed to the three men being ordained, before thanking their families for presenting them to the Mother Church of Jerusalem.

Putting on their new garments, the newly ordained deacons started their new mission in service to the Catholic Church, ending the Mass with songs of worship to God.