Two new deacons for the diocese of Jerusalem 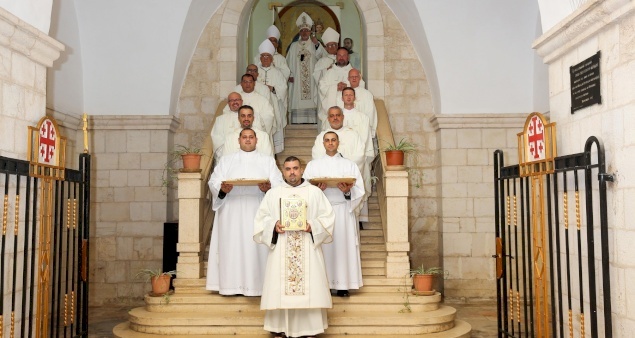 Two new deacons for the diocese of Jerusalem Available in the following languages:

JERUSALEM – This Friday, June 10th, two seminarians of the Patriarchal Seminary of Beit Jala were ordained deacons by the imposition of the Hands and the Prayer of Consecration of His Beatitude Pierbattista Pizzaballa, Latin Patriarch of Jerusalem.

One week after Pentecost, the diocese of Jerusalem rejoices once again. After years of studies in the Patriarchal Seminary, Yazan Bader and Michael Althib were ordained deacons on June 10th, in the co-cathedral of the Latin Patriarchate of Jerusalem. The celebration took place five days after their admission to candidacy for ordination as deacons, and was attended by the families of the ordained, and co-celebrated by many bishops and priests of the Latin Patriarchate of Jerusalem, including Mgr William Shomali, General Vicar, Mgr Rafic Nahra, Patriarchal Vicar for Israel, Fr. Nikodemus Schnabel, OSB, Patriarchal Vicar for Migrants and Asylum Seekers, Mgr Giacinto-Boulos Marcuzzo, bishop emeritus, and Fr. Bernard Poggi, rector of the seminary.

“The ordination of two new transitional deacons for the Latin patriarchate is a tangible sign of Providence for his church,” says Fr. Bernard. “Michael comes from one of our communities in the United States; much like me, he felt a call to come to serve the Mother Church even though he was born and raised in the USA. There are many people who wonder why we send priests to serve the Latin rite Catholics in Arabic outside of our patriarchal diocese. This ordination is a sign that the mission of the Patriarchate is fruitful in the Diaspora.”

It is on October 6th, 1994 that Michael Althib was born, in Pomona, California. After finishing his secondary studies in California, he spent a year studying music in a community college. In 2013, he decided to enter the Latin Patriarchal Seminary of Beit Jala. After one propaedeutic year, one year of French, two years of philosophy, and three years of theology, he received the clerical cassock in 2017. He became a lector in 2019 and an acolyte in 2020. Over the years he served at the parishes of Zababdeh, Ramallah, Bir Zeit, Rameh, and Jifna, and spent his pastoral year at the parish of Misdar.

As for Yazan Bader, he was born in Ajloun, Jordan, on May 23rd, 1995. In 2008, he entered the minor seminary of Beit Jala, and in 2013, he joined the major seminary, where he completed his propaedeutic year. In 2014, he studied French for a year, then philosophy for two years. In 2017, he began his theological training and received the clerical cassock. He was instituted as a lector in 2019 and was instituted as an acolyte in 2020. That same year he had a full year of experience in America, at the St. Joseph Seminary (New York). In 2021, he completed a year of pastoral experience at St. Paul Church in Jubeiha.

“Yazan comes from the parish of Wahadneh, in Jordan,” tells Fr. Bernard. “This small parish has given a great number of priests to the Patriarchate – eleven in total. Yazan entered the minor seminary and is now in his 14th year of formation. We thank all the formators over the years who have worked with great dedication to serve the seminary before us, and we truly miss having pupils in the minor seminary. We know that Christ who called his disciples here in this land, continues to call young men and woman to follow Him and to give themselves entirely to this vineyard which He himself has planted.”

During the celebration, the Patriarch also addressed a few words to the two ordained. “We need priests who love God and serve the Church, who want to serve and not to be served, who are moved and pushed forward only by the love of the Lord. […] Do not occupy all the space; instead, create space for the others, and remain attached to the Word of God.”

After the Mass, the new deacons were greeted outside by scouts and the faithful, who came to congratulate them. After the episcopal ordinations of Mgr Rafic Nahra and Mgr Jamal Daibes, this celebration gives another cause of great joy for the Mother Church of Jerusalem, who welcomes into her ranks two new servants of God and the people. 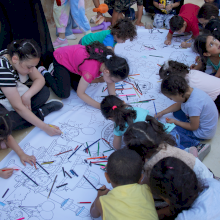