NABLUS – The Saint Joseph School of Nablus is modernizing its teaching by equipping computers and video projectors. An investment that will enrich this school of the Latin Patriarchate, renowned for the quality of its teaching and a large number of applications for enrollment, which sometimes can’t meet.

It was in March 2018 marked that the Saint Joseph School of Nablus received the new computer equipment. Twelve computers and video projectors were installed and distributed between the classrooms and the administration.

These new tools will enrich teaching in the various subjects offered: Arabic, English, mathematics, French or history. For teachers, these new equipment will facilitate the transmission of knowledge, increasing the interest and motivation of students. For example, fun and educational films can be broadcast. As school principal Abeer Hanna explains, “One of our goals is to show our students that technology can also be used for learning, not just for entertainment!”

These devices should directly benefit the 612 students in the school. Some computers will even be available to students who will have access to the hall and school laboratory. The kindergarten was not forgotten and received for its classes four computers. The teachers’ room was also equipped as well as the administration. “We also needed tools that allow us to be more efficient and improve working conditions in order to better serve students and their education,” said Abeer Hanna.

An open and renowned school but cramped

Founded in 1904, the Latin Patriarchate School in Nablus has always been recognized for its high academic standard. Today, with its 46 teachers, the school teaches kindergarten to 12th grade or Tawjihi, transmitting a message of Faith in respect of each, without religious or social discrimination. The students are divided into 22 classes, two classes per level from 1st to 10th grade, a class for 11th grade and a class for 12th grade.

In addition to the school program requested by the Palestinian Authority, additional courses in French and music are offered. Even if Christian students represent only 10% of the students, special importance is given to the catechism.

The motto of the Schools of the Latin Patriarchate is: “May they know You” is perfectly in the Saint Joseph School where everyone is welcomed without exception: Christians, Muslims and Samaritans. This is one of the school’s missions: to transmit justice and to foster links between these three religions, in a spirit of openness and respect.

Nevertheless, the school faces increasing difficulties due to old and cramped premises. They no longer allow to answer all the requests of inscriptions with classrooms whose capacity is between 20 and 30 places only. Space is also lacking outside, with only one playground too narrow to accommodate the large number of students in the school.

This project wouldn’t have been possible without the generous donation of the Order of Holy Sepulcher of Jerusalem in the Innsbruck Section in Tyrol and the Tyrolean Government in Austria. 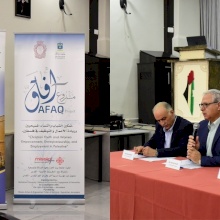