The month of Ramadan: an opportunity for dialogue and meetings in the Holy Land

The month of Ramadan: an opportunity for dialogue and meetings in the Holy Land Available in the following languages:

JORDAN, PALESTINE – On the grounds of the Diocese of Jerusalem, great initiatives are springing up and many Christian and Muslim encounters are taking place, favored by the context of the month of Ramadan.

Iftar dinners organized by the Church were held in Jordan and Palestine, following a long tradition that finds its roots in the spirit of the meeting between St. Francis of Assisi and the Sultan Al-Malik Al-Kamil in 1219. This is the case at Our Lady of Peace Center, south of Amman, spearheading intercultural dialogue in Jordan as it was founded to take care of the disabled without religious distinction. It is also home to peace conferences and youth camps. Iraqi refugees are also accommodated. So the center is a driving force for joint action between Christians and Muslims working together for the good of children.

Again this year, and under the patronage of Archbishop Pierbattista Pizzaballa, Apostolic Administrator of the Latin Patriarchate, an Iftar was organized at the center in presence of several religious figures.

Similarly, the Custody of the Holy Land organized an iftar on the roof of Casa Nova, a center for pilgrims in the Old City of Jerusalem. Various personalities attended; European diplomats, Palestinian politicians and representatives of the various churches including Fr. Francesco Patton, Custos of the Holy Land, and Fr. Ibrahim Faltas who organized the event. A success that Mr. Adnan al-Husseini, Minister of Jerusalem Affairs, welcomes saying that this evening, bringing together Christians and Muslims shows the integration that distinguishes the Palestinian people.

Many initiatives flourish on the part of Christians who support Muslims during the month of Ramadan. Caritas Jordan has also organized a food distribution for needy families in Salt, west of Amman. In the same way, it opened the doors of the restaurant of Mercy free of charge for the Muslims who break the fast of Ramadan. These are all initiatives that take root in Christian charity and faith and contribute to peace and community. 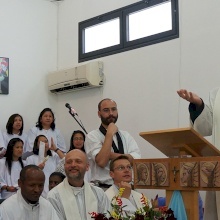 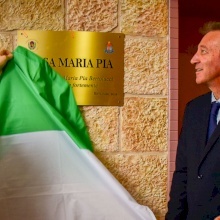 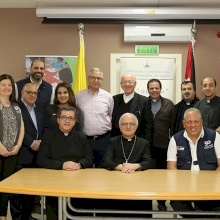