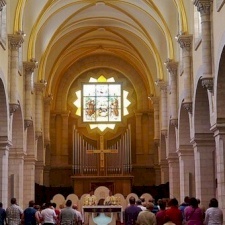 The grotto of the Nativity is the place where Christ was born of the Virgin Mary. On this grotto, a Basilica with a nave and 4 aisles was built and it is accessible through a humble entrance. Around the grotto of the Nativity, there are other grottoes tied to the memory of St. Jerome. Next to the Basilica lies the Church of St. Catherine preceded by a small courtyard.

The 4th century Basilica was substituted in the 6th century by a bigger one which is standing to date. In the Crusader period (12th cent.), the walls were embellished of precious mosaic incrusted with gold and mother-of-pearl, of which are still left broad fragments with scenes of the NT (in the transept with Latin inscriptions) and symbolic representations of ecumenical councils (in the nave with Greek inscriptions). Above the columns of the nave, in a series of medallions, are depicted the ancestors of Jesus (with Latin wordings). At the feet of one of the adoring angels to the left of the wall is an inscription in Latin and Syriac with the name of the artist, the painter Basil. Excavations conducted in the years 1934-35 by the British Mandate at the time have brought to light considerable remains of mosaic floors of the Constantinian Basilica, much of which is still as visible in the nave as it is in the transept of the Basilica. The Franciscans, who have been living in Bethlehem since 1347, have their own convent next to the Basilica of the Nativity and a church dedicated to the holy martyr Catherine. The church exists since 12th century and was gradually enlarged.