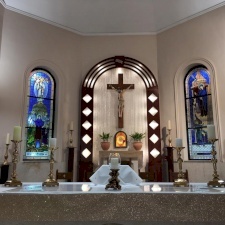 Fuheis lies in the middle of Jordan near the capital, Amman. It is a little town of 24 thousand inhabitants, most of them are Christians: 1/3 catholic, 2/3 orthodox. Most of its population works in trade, agriculture (especially olive trees), cement industry and civil or office jobs.
Arab Christians in Fuheis predates Islam, and they have remained during the subsequent centuries.

The Latin Parish of Fuheis was established in 1874 during the Ottoman era (Turkish), which ruled Jordan from 1516-1918. Because of the growing weakness of the Ottoman Authority, ignorance, poverty and illness increased in the 19th century, and the Latin Church proved its leadership in education. Eventually, the country gradually stepped into the age of modernization and development, but the people of Fuheis did not abandon their authentic qualities coming from their Bedouin roots, and their old spirit that goes back to the early dawn of Christianity.
There are 1 530 families in the Parish in Fuheis, including 200 Iraqi families. There are a parish priest and a chaplain who serve the two churches of the Parish; Fr. Imad Twal and Fr. Mateo. Masses are held on Saturdays and Sundays in both churches. There are also many spiritual and social activities, which enable every member of the society to participate and share their faith and experience: the Parish and School Committees, the Christian Ladies Associations, the group "Rangers of Love”, which brings together young people from the city who are committed in the environment’s protection... These young people often meet to clean the lands and forests and to raise awareness about keeping the environment clean. In terms of voluntary work, the Latin parish of Fuheis is considered to be one of the most active parishes. Many associations there help protect the local environment and spread cultural consciousness.

In addition to the churches, there is also a school in Fuheis, whose conception began in 1885, when the first priests opened some classes in order to teach the children Arabic, religion and math during the Ottoman period. Like the other Latin Patriarchate schools during the 19th century and the Ottoman period, it was a beacon in the darkness.
Today, it is mixed and has three main stages: kindergarten, elementary school, and primary and secondary school. In other words, it is a school that goes from kindergarten to Tawjihi. The aims of the school are multiple; to encourage dialogue between the students, the administration and the teachers; to promote scholar activities so that students' personalities and talents can be developed, in order for them to become good citizens and committed Christians; to help them discover their role in modern society.