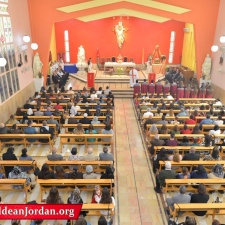 Jabal Hussein is a neighborhood in the capital city of Amman, in the district of Al-Adbali, the 9th of the 27 districts in the Amman Governorate. Large sections of the district are residential, and due to its geographical location in the center of the city, it contains several important government buildings and businesses. The area encompasses several bus stations serving routes to many cities in Jordan. Jabal Al-Hussein and Jabal Al-Weibdeh are among the oldest neighborhoods in the city; the Greater Amman Municipality has listed them as areas of great historical significance. Several Western expatriates, working or studying in Amman, prefer these areas for their accommodation.

In 1953, when the school started at Jabal Hussein, Christians who lived on this mountain came to the school chapel for Sunday Mass though belonging to the Lweibdeh Parish. The school developed in 1965 and as the number of Christians increased, the chapel became too small for them. They encouraged the principal of the Frere Honore to build a larger chapel and with the help of the Brothers of Christian Schools (BCS) and benefactors, the school authorities built the chapel. A BCS delegate came for the laying of the first stone ceremony, but as financial resources were scarce, it took three years to complete the interior of the building. Patriarch Alberto Gori blessed the Chapel in April 1967. In the absence of a church in Jabal Hussein, this school chapel serves as a parish church with 200 families as parishioners.