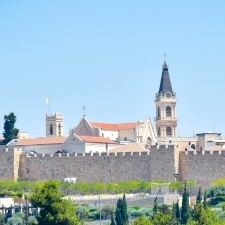 Today, the Latin Patriarchal Vicariate for Jerusalem and Palestine encompasses the city of Jerusalem and the Palestinian Territories, including the Gaza Strip. About 85% of the Christians living in these areas are Arabic-speaking.

Upon its restoration in 1847, the Latin Patriarchate began to strengthen the Latin presence in Jerusalem and Palestine by founding missions there. The very first was that of Beit Jala, in 1853; then came the missions of Jifna (1856), Ramallah (1857), Lydda (1858), Birzeit (1858), Taybeh (1859)... Their establishment was later consolidated by Patriarch Ludovico Piavi and by the emergence of a local clergy.

After the events of 1948 and 1967, the Christian community of Jerusalem and Palestine experienced a massive emigration abroad, which led to a drastic reduction in the number of parishioners. However, thanks to the social and educational infrastructures put in place by the Patriarchate and open to all, these very fervent and dynamic communities continue to radiate and promote a Christian vision of hope, peace and human dignity.