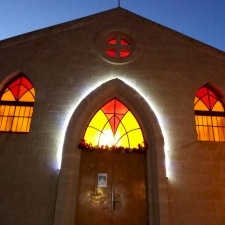 Ma’in holds important artifacts of Byzantine churches. Based on the inscriptions found, it is clear that Christians were present until the early centuries of Islam, then gradually disappeared. It was only at the end of the 19th century that a Christian tribe (the Haddadin) from Kerak belonging to the Greek Catholic rite, was established in the country. They built a large church in the 30s and the parish priest resided in the town. In the 1950s, the Christian community was divided by disagreements, a minority group became Latin and built the present church in 1956-57. Many young people left the village to seek a better life, some young families remained and the majority of the population are elderly.

During the early years of the Latin church of Ma’in in the late 1950s, the parish priest lived in town and the chaplain from Madaba came for Sunday Mass. This was a difficult arrangement that continued but was no longer possible after a few years. The church was abandoned for nearly twenty years that the Latin Christians attended the Greek Catholic Church. In 1983, the Little Family of the Annunciation arrived. This Italian religious community of men and women who observe an almost cenobitic monastic life built two small monasteries on the land adjacent to the church. The Patriarch entrusted the church to this community and asked them to open the church during times of their community prayer. All prayers and liturgical services are in Arabic. Over the years, the faithful have increasingly come to this place from throughout Jordan to seek spiritual comfort.