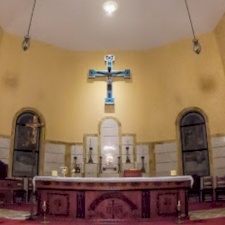 Marj Al-Hamam is located about 7 km. south of Amman, the country’s capital. This is an attractive residential district along the highway of the airport at the crossroads to Madaba, Dead Sea, Jordan River and South Jordan. The first families of the parish were Royal Jordanian employees and army officers as these two groups initially settled in two large housing projects, from which the district developed and expanded. Most residents of Marj Alhamam are government employees – Jordanian Army, Royal Jordanian Airlines – and some from the private sector. There are five Christian churches in Marj Alhamam: one each for the Latin, Greek Orthodox, Greek Catholic (Melkites) and two Protestant churches.

The parish was established in 1986, and now with 350 families for parishioners. The parish compound includes the Church and convent. The present Church was the former parish kindergarten, which was converted and renovated to accommodate 120 people. The purpose of the new building project is to provide a more spacious Church for the parish of Marj Alhamam and the wider district of Amman and the Seventh Circle extending to Queen Alia International Airport Road. The St. Joseph of the Apparition Sisters live in the vicinity of the parish where they serve: in pastoral care, youth ministry and catechetical work for the children in the public school. In 2015, the parish became a center, which hosted Iraqi Christian refugees who fled to Jordan when ISIS took control of the northern region of Iraq. About 36 refugees, including nine families took refuge in the parish and after Christmas, most of them were settled into apartments.