Anjara Parish - Our Lady of the Visitation Church 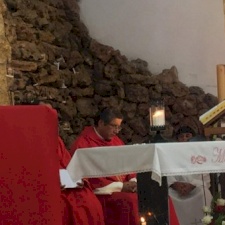 Only a few kilometers south of Ajloun in the north of Jordan, is the mainly Muslim town of Anjara. The town’s environment is poor, with agriculture as the main livelihood in the surrounding lands. Consequently, many families are low-income earners in unskilled jobs. Anjara is located in the hills of Gilead east of the Jordan valley, where many events of the Bible occurred. It is believed that Jesus and his mother Mary passed through the town and rested here in a cave. To commemorate this, Fr. Yousef Salmeh Nammat built a shrine to Our Lady of the Mountain next to the school.

On May 6, 2010 the image of Our Lady of the Mount shed tears of blood. The shrine has become part of a holy route in Jordan, visited by thousands of pilgrims every year.

The school was first established in 1890 in a small building and the following years enlarged and improved with new buildings. The Kindergarten is on the ground floor. Today the parish takes care of the Marian Shrine and its pilgrims. Since 2008, a day center for the rehabilitation of disabled people was opened for both Christians and Muslims. In 2006, a shelter was opened for Christian orphan girls or with serious family and in 2007, a section was inaugurated for teenage girls followed by one for teenage boys in 2010. Presently, about 40 orphaned or Christian children with family problems are cared for in the shelter. The entire parish is involved in this work of charity with some making financial donations while others volunteer their time. In order to develop an integral formation of the children, the first Child Library was inaugurated near the school in 2008, where art and music classes are open to all the children in the area. In 2005, the Prison Ministry Assistance started in Anjara with some priests and lay people visit Christian inmates in the 12 prisons of Jordan.