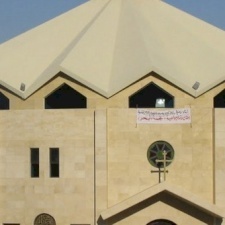 Aqaba is in a strategic location: a port city along the border of Israel, with Saudi Arabia and not far from Egypt. The city is attractive to Jordanians and a place to work for many Catholic migrants from the Philippines and Sri Lanka numbering to about 300. The local Christians represent 2% of the city’s population. It is located at the northeastern tip of the Red Sea between the continents of Asia and Africa, and has made its port important over the course of thousands of years. The ancient city was called Ayla, its strategic location and proximity to copper mines, made it a regional hub for copper production and trade in the Chalcolithic period.

It is the farthest parish in Jordan, located on the Red Sea in the far South. The first parish was founded in 1982, and the church’s liturgies and prayers took place in a hall. Construction of the present church began in 2010.It was consecrated by Patriarch Fouad Twal in 2012, and is one of the most beautiful churches in Jordan. It is circular in shape with a dome in the shape of a star, a reflection of the Church’s name, “Stella Maris”. The number of residents of Aqaba increased with the arrival of Palestinian refugees in 1948, and more recently with the rise of the city’s prosperity due to tourism and urbanization, being the city’s only port in the Kingdom. The Latin parish consists of approximately 100 families. The Rosary Sisters run a mixed High School, which has about 1,000 pupils, thus increasing the importance of the Christian presence in the city.