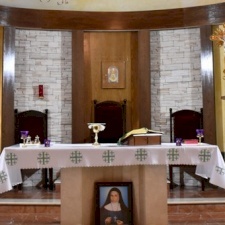 Naour is a small town in the southwest district of Amman, originally an agricultural village, now it is mostly residential. The population has increased over the years with people from other countries as well as other parts of Jordan. During the Ottoman period, many from Circassia settled here and their families and descendants still live in the area and it has become a mainly Muslim area. Work is mostly in agriculture or commerce with a few employed in the government, military or low-skilled jobs. It is generally a poor area with a low level of employment.

The original school and parish were established at the same time in 1924. A new school building was built in 1954 and the new church in 1956 while providing kindergarten education. In 1971, an expansion of the kindergarten structure was made allowing for more classrooms for additional grades. Later between 1992 and 1994, a new school building was built. The elementary school has eight classroom for each grade level and a room for religious education. There are laboratories for: computers, science with minimal equipment, and a library with inadequate reference materials. The basement of a multi-purpose hall has been converted to rooms for laboratories, library and children’s restrooms. The kindergarten is separate from the main school. The Shrine of our Lady of Lourdes was established in 2015, the first in Jordan and it is now a place of pilgrimage in addition to serving as a Church.