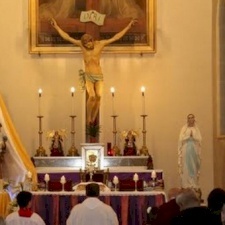 Jabal Amman is one of the seven hills that originally made up Amman, Jordan. Today, Jabal Amman is located near the old downtown area with its streets lined with full grown trees. In 2005, the Greater Amman Municipality recognized Jabal Amman as a “heritage attraction point” and set forth plans to preserve and develop the historic hill. Jabal Amman is renowned for its historic buildings and distinctive early 20th century architecture. When politicians and entrepreneurs moved into the neighborhood, they built houses, which feature a single story with a large front porch running the entire front exposure of the houses.

St. Joseph is the second parish established in Amman, after the parish of Christ the King. The church was was built in 1959 with the help of German benefactors. At the present time, many of the parish faithful are moving to new neighborhoods in Amman. The Rosary Sisters serve the church, and have a large private school, while the Missionaries of Charity, the Sisters of Mother Teresa, teach Catechism to students of the public schools.