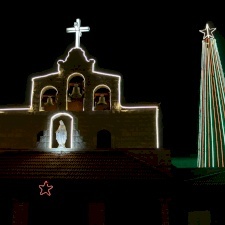 Located about 73 km north of Amman in hilly, fertile countryside, it is the capital town of the Ajloun Governorate. In 1187 Saladin crossed the hills around Ajloun and fought a decisive battle defeating the Franks. It is a fairly prosperous town whose inhabitants are mainly occupied in professional, business, military and governmental work. There are many Christians living here. Outside the town the land is mainly agricultural, with olive trees being the predominant feature.

The school, in the middle of the town, was established in 1889 in two small rooms of a house. The first permanent building had three rooms. More classrooms were built in 1967, two rooms in the priest’s house were used for the Kindergarten. In 1970, the main school of eight classrooms was built, followed in 1995 by school offices next to the church. In 2005, a multipurpose hall was constructed behind the church and school, a very useful play area with shade in the summer and shelter in the winter, and on the ground floor a good sized science laboratory has recently been developed.