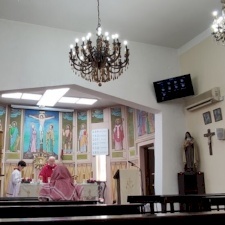 Safout is located northwest of Amman an urban area yet economically poor. The school occupies a small plot of land with no possibility of expansion. The population consists mostly of employees and workers who commute every day to work in Fuheis, Salt and Amman, while the rest of the population are elderly who live quietly at home.

The first school, a very simple construction, was established in 1935, and occupied one of two- rooms built at the side of a very small church to house the parish priest. Later, three more classrooms were built in 1978 to accommodate increasing student enrollment. The following year, a new church was built alongside the house. This allowed the original church to become part of the school. Since early 1980, a house for the priest has been built above two of the three newer classrooms, and so he lives on the premises. In 1993 because of the diminishing number of children attending the school and new government regulations, the grades four, five and six had to be discontinued. This allowed the other three grades to have a classroom each. Starting August 2015, the Priest’s house was completely renovated.