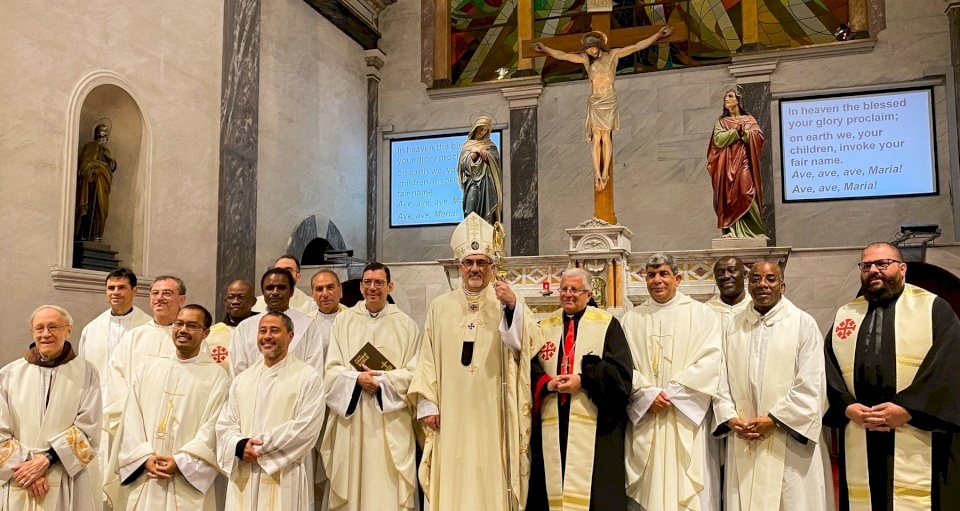 CYPRUS – On Wednesday, December 7th, 2022, His Beatitude Pierbattista Pizzaballa, Latin Patriarch of Jerusalem, officially inaugurated the new siege of the Patriarchal Vicar of Cyprus, Fr. Bruno Varriano, OFM, by presiding over a Mass in the church of the Holy Cross in Nicosia.

The Mass was concelebrated by Fr. Ibrahim Faltas, Custodial Vicar of the Custody of the Holy Land, Mgr Salim Sfeir, Maronite Bishop of Cyprus, as well as all the parish priests of the Latin Patriarchate in Cyprus, and several other priests serving in the diocese.

Nine years ago, Mgr Pizzaballa, then Custos of the Holy Land, assigned Fr. Bruno Varriano as the superior and guardian of the Basilica of the Annunciation in Nazareth. Yesterday, during the Vigil of the Solemnity of the Immaculate Conception, His Beatitude announced the appointment of Fr. Bruno as the new Latin Patriarchate Vicar in Cyprus, replacing Fr. Jerzy Kraj, OFM, who served the vicariate for nine years. The Gospel reading at Mass was the same one that Fr. Bruno read every day during his service in Nazareth, the Annunciation (Luke 1:26-38). “As if Mother Mary were welcoming you here, assuring you of her protection,” His Beatitude addressed Fr. Bruno during his homily, congratulating him on his new position.

Since the re-establishment of the Latin Patriarchate in 1847, a Latin Patriarchal Vicar has thus been present in Cyprus, looking after four LPJ parishes located in Nicosia, Larnaca, Paphos and Limassol.

Previously, the Vicariate house was part of the Holy Cross Franciscan convent in Nicosia, but since his appointment as Latin Patriarch of Jerusalem, Mgr Pizzaballa has been working tremendously to improve the pastoral work and administration on the island. Therefore, a separate and independent house has been established to host the headquarters of the Latin Patriarchal Vicariate in Nicosia. “It’s now time to make some changes, to put more attention on the pastoral work here on the island,” said His Beatitude. “This decision gives the Vicar full power and more time to focus on the pastoral needs of the Church here, by having a fully functioning church just like any other in our diocese,” he added, explaining the new changes taking place, after reading the decree of nomination of the new Patriarchal Vicar in Latin.

“The new house of the Vicariate is your home,” said Fr. Bruno, ending the Mass by entrusting the diocese to Mary and Saint Barnabas, the patron saint of Cyprus.

Then, the faithful and priests walked to the new Vicariate house, to be blessed by His Beatitude. Although the place is not fully ready yet, the faithful were welcomed to tour it and to rejoice in the work that God is doing in their midst.