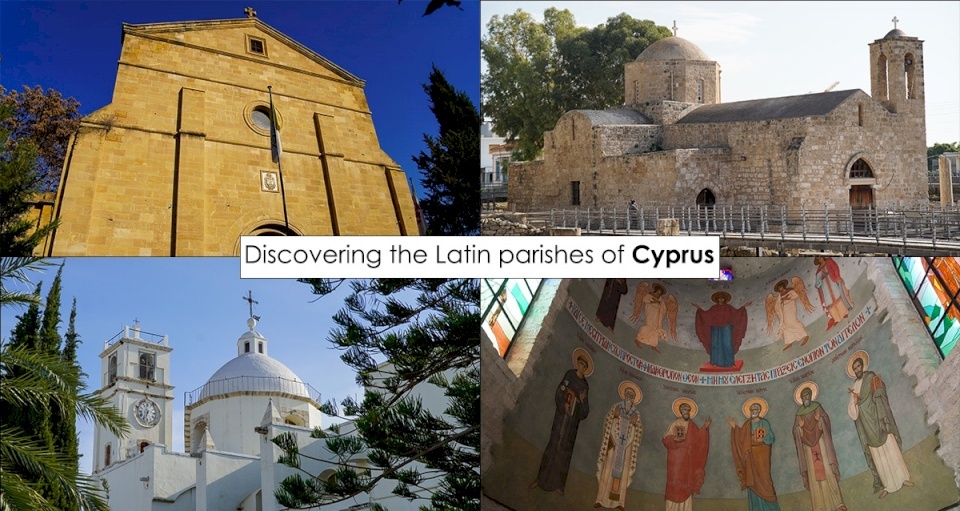 CYPRUS – This island of the Mediterranean Sea, which is part of the diocese of the Latin Patriarchate of Jerusalem, hosts four different parishes in four different cities – the Holy Cross Church, the St. Mary of Graces Church, the St. Catherine Church, and the Saint Paul’s Catholic Church. As His Beatitude Pierbattista Pizzaballa, Latin Patriarch of Jerusalem, recently officially nominated Fr. Bruno Varriano as the new Patriarchal Vicar of Cyprus, and announced the opening of a new vicariate house, let us discover the Latin Church's history, and hear the testimonies of the parish priests who serve the Catholic community of Cyprus.

“Cyprus stands where Europe and the Holy Land meets,” once said His Beatitude during Pope Francis’ visit to the European island in November 2021. “Historically, it has always been linked to Jerusalem; it is a diocese of Jerusalem.” Indeed, this small island of the eastern Mediterranean Sea has had close ties with the Holy Land since the 12th century, witnessing the birth of a Latin Catholic community around 1192.

The current church building of this parish was built in 1900, on the same site where the first Franciscan church, dedicated to the Holy Cross, was built in 1642. In fact, the Franciscans reached the island of Cyprus before the death of St. Francis during the 12th century, but had to flee the land due to the Ottoman conquest of Cyprus (1571), which led to the persecution of all Christians. They returned in 1592, as one of the first western religious orders having obtained a permit allowing them to come back to the island.

Today, there is on the church premises a convent for Franciscan friars, who serve the Catholic community in the capital of Cyprus. Nicosia hosts a diverse group of people from different nations. They pray, worship, and celebrate Mass together in eight different languages. The Nicosia parish has also provided Caritas Cyprus with space in their parish to support the migrant community.

Near the Latin church, there is a barrier splitting the Southern part (Greek) from the Northern part (Turkish) of the island. Every Sunday, Nicosia’s parish priest makes a two hour trip to reach small Catholic communities found in two cities on the other side: Kyrenia and Famagusta, to provide pastoral care. Christians there are predominantly expatriate communities, particularly university students.

In Kyrenia, there is a small chapel, which belongs to the Latin Parish of Nicosia. It is open only on Sundays to celebrate Mass. In contrast, the faithful in Famagusta celebrate Mass in a small rented building; this is due to the prayer restrictions imposed on Christians. (Watch the video to hear more from the Christian community living there).

In 1878, on the feast day of St. Catherine of Alexandria – the famous virgin and Martyr of the 4th century – the current church building of the Latin parish was inaugurated. Just like Nicosia’s parish, the parish, which is located on the second-largest city on the island, hosts the Limassol Franciscan convent and serves the largest number of the Catholic community, mostly foreigners.

The words “Come to me all (…), and I will give you rest” (Mt, 11:29) can be found written above the wooden "tent" in the church court, where foreign workers and refugees gather to play games, connect, and receive food and legal support through the St. Francis’ Shelter foundation.

In Larnaca, the infrastructure of the church is unique, being shaped like a Latin cross. It dates from the 15th century, yet the present-day building was built in the early 19th century. The sisters of the Immaculate Sacred Heart of Mary live in a building next to the parish, and spend their day serving several non-self-sufficient elders in an elderly house run by them.

Sunday Mass is celebrated in five different languages: Greek, Sri Lankan, Polish, Filipino, and English, in order to share the Eucharist with the expatriates from different nations who come to work in the industrial city of Larnaca.

According to the Orthodox Church, some time after the resurrection of Christ, St. Lazarus fled to Cyprus to escape the plots against his life. There, he was appointed by St. Paul and St. Barnabas as the first Bishop of Kition (present-day Larnaca). After his death 30 years later, he was buried there. In  890, a tomb was found there, bearing the inscription 'Lazarus the friend of Christ'. The Orthodox Church of Agios Lazaros was then built on the site (Watch the video to view more).

The Book of the Apostles tells us about St. Paul’s and St. Barnabas’s first missionary journey to Cyprus, which occurred around 45-46 AD - "So they, sent forth by the Holy Spirit, went down to Seleucia and from there sailed to Cyprus." (Acts 13:4). Today, in the coastal city of Paphos, "St. Paul’s Pillar" - the pillar where St. Paul was whipped for preaching Christianity to the Jews - stands in front of the church of Agia Kyriaki, the parish church. In 1984, His Beatitude Chrysostomos II, Archbishop of Cyprus, entrusted this church to the Latin Church, which allowed the Catholic community to celebrate Mass.

"We welcome hundreds of tourists every year. They celebrate their wedding ceremonies in our church, as it is the holiest sites on the island," Fr. James, shared with us, sitting in front of the small coffee shop and thrift store found underneath the parish offices. He has been serving here for 15 years, presiding over the ceremonies and tours for the pilgrims, as well as raising money for the hospice of Archangel Michael, which was founded by Fr. Johnny Sansour, a Latin patiarchate late priest, and which offers a free high-quality service for people with cancer, as well as incurable, respiratory, and end-stage renal diseases, regardless of their origin or religion.

Click here to see the album of the parishes! 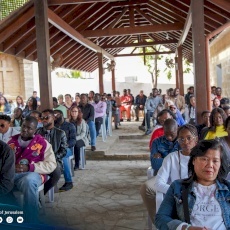 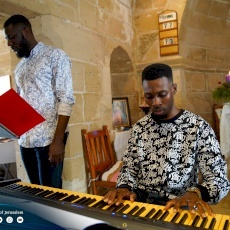 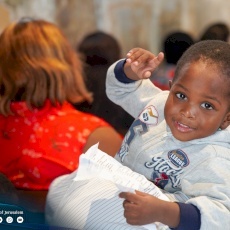 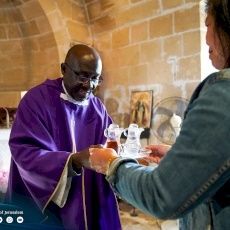 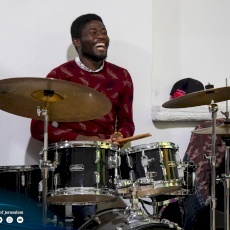 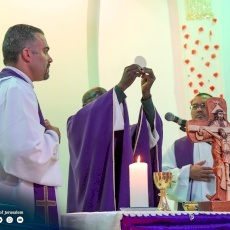 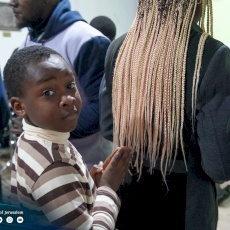 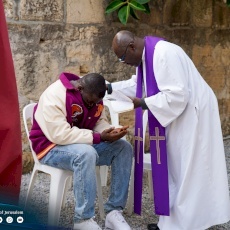 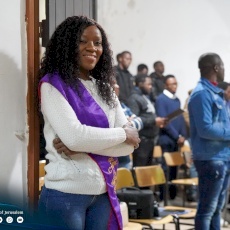 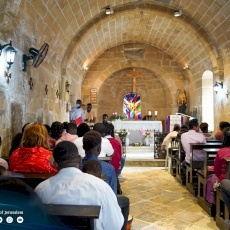