Rejoice, a child is born in Bethlehem: Christmas celebrations for 2022 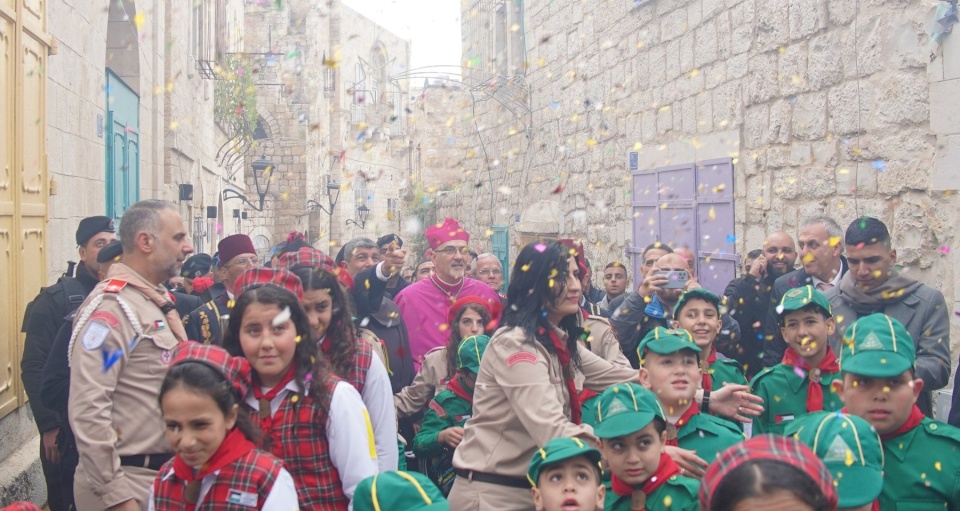 BETHLEHEM – On December 24th and 25th, 2022, local Christians and foreign pilgrims celebrated the birth of Jesus Christ, the “bread of life”, by attending celebrations presided over by His Beatitude Pierbattista Pizzaballa, Latin Patriarch of Jerusalem, in the small town of Bethlehem, the “house of Bread”.

The holy month of December has come to an end, and the long-awaited day has arrived. On December 24th, the entire town of Bethlehem welcomed the Patriarch for his solemn entry into the Basilica of the Nativity, to begin the celebrations for Christmas eve.

“We can truly feel the spirit of Christmas here,” said Leeuw, a 23-year-old Christian from the Netherlands, as he watched the scouts play Christmas melodies with their instruments. “It is nice to see everyone unified and celebrating Christmas in public,” he added. For this year’s celebrations, Bethlehem saw the return of many pilgrims, as travel restrictions due to the pandemic of COVID-19 were put to an end.

Before the arrival of the Patriarch to the city of Bethlehem, His Beatitude received to the Patriarchate Jerusalem parishioners. Then the procession headed to the Greek Orthodox monastery of Mar Elias, where the Patriarch was welcomed by a Palestinian delegation consisting of mayors, priests and the faithful of the parishes of the Bethlehem governorate.

Meanwhile, in Bethlehem, there was the march of the scouts, from the beginning of Star Street to Manger square. Tradition has it that this route was taken by St. Joseph and the Virgin Mary during their search for shelter. After Mgr Pizzaballa’s solemn entry, which followed the same path as the scouts, he was welcomed in front of the Basilica of the Nativity by religious and civil authorities.

His entry was followed by vespers and the first procession to the Grotto of the Nativity, to prepare for the Midnight Mass.

Later, at 9 p.m., the faithful started filling the St. Catherine church for the Mass, which was attended by Mr. Mahmoud Abbas, president of the Palestinian National Authority, representatives of the State of Palestine and of His Majesty, King Abdallah II of Jordan, consuls general, and members of the diplomatic corps.

“Once again, we meet each other here in Bethlehem, in this Holy Place, to thank, praise and celebrate the wonderful event of the Savior’s birth,” said His Beatitude in his homily. “With the prophet Isaiah, we proclaim to the whole world that a great light has appeared before our eyes and that a great joy has filled our hearts, ‘for the grace of God has appeared, bringing salvation to all’ (Titus 2:11): Jesus Christ the Redeemer,” he added.

At midnight, the church bells rang, announcing the birth of Christ, and Jesus was placed in the manger at the foot of the altar.

The Mass ended with priests and bishops making their way to the Grotto of the Nativity a second time, to place Jesus where, according to tradition, the Virgin Mary gave birth, and then in the manger.

The next day, the celebrations continued as His Beatitude celebrated in Arabic the Christmas morning Mass, attended by local and foreign Christians. Mgr Pizzaballa wished everyone a Merry Christmas, saying: “My wish, then, is that the Child Jesus will awaken in us too, once again, the desire for good for each person, strengthen our trust in all, and sustain our action for peace, mercy, and justice in the Holy Land and in the world.”