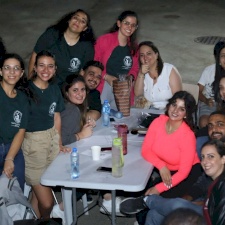 BEIT JALA – The General Secretariat of The Youth of Jesus’s Homeland Palestine (YJHP) held its first 4-day camp for the Workers’ Group at Cremisan Monastery in Beit Jala, which was entitled Halla La Wain “and now where to?”, with the participation of 70 young men and women from all the parishes of the homeland of Jesus.

The camp began with a Holy Mass presided over by Fr. Bashar Fawadleh, Chaplain of YJHP, who focused in his homily on the link between migration and the 12th chapter of the Book of Genesis, in the story of God’s call to Abraham. Afterwards, the working committee welcomed the members and presented the program of the camp. The participants were then divided into teams and discussion groups. Deacon Abdallah Dababneh gave an introduction to the purpose of the camp for this year.

The first day concluded with a Marian evening during which the participants reflected on the life of the Virgin Mary, who suffered and faced difficulties but remained confident in God’s Will and His timing.

On the second day, the current reality and situation were the main topics of discussion of the youth groups. Mr. Joseph Hazboun, regional director of The Pontifical Mission of Jerusalem, gave a lecture entitled “Our history in Palestine”, in which he referred to the misinformation regarding the Christians of Palestine, stressing the need to verify the accuracy of the information before publishing it. He also stressed the importance of understanding history and preserving the land by our steadfastness in it as Palestinians, thus preserving the Christian presence in the Holy Land.

Rafi Ghattas, General Secretary of YJHP, presented another entitled “Revolutionary and Christian”, in which he emphasized the role of Christian youth today on this land, within and outside the Church, underscoring the words of Pope Francis: “If a Christian wasn’t revolutionary at this time, he is not truly a Christian”.

Various topics such as abortion, premarital sexual relations, womb lending, embryo implantation, gender determination, euthanasia, organ donation, bullying, competition, gossip and laziness were discussed later, by dividing the participants into groups that discussed their different views, before Deacon Abdullah raised these topics based on the teachings of the Church and the YOUCAT book (Youth Catechism of the Catholic Church). Later, the youth visited the winery of the monastery.

Mrs. Nelly Abu Aita shared with the youth an experience from her life, filling them with joy, hope and positive energy, and said: “We must not choose while we are afraid, but rather choose with love. God’s hand is always present with us along the path we take in our lives. No matter the unknown, the difficulties and the challenges, God’s hand is our shepherd”.

The day concluded with several activities, including a Quiz Night and an event entitled “The Call of Heaven”, which represented a dramatic monologue expressing the reality of youth today and their relationship with God.

On the third day, the youth discussed the issue of self-love and appreciation, in a lecture presented by Mrs. Jumana Kaplanian, who said that “life is not a straight line, as it requires flexibility and change. Growth and development carry pain. However, pain is necessary to accomplish whatever you want with joy”.

Sr. Mariam Ba’bish also presented a lecture entitled “My Relationship with God”, in which she dealt with the method of reflecting on the Holy Bible, as well as sensing the presence of God in our lives.

After the lecture, everyone headed to the Patriarchal Seminary of Beit Jala, where recreational activities were held, followed by a Eucharistic Adoration.

On the last day, Fr. Issa Thaljieh gave a lecture in which he spoke about love and religion. He talked about the basic condition when choosing a life partner according to the Church, which is that one should choose someone who resembles him or her and loves forever, and that both of them be children of God.

The meeting concluded with a Holy Mass presided over by Fr. Bashar, who explained in his homily that “our relationship with the Lord in “Halla La Wain” is a relationship of lasting joy, and that the living Christ is the source of our joy”.